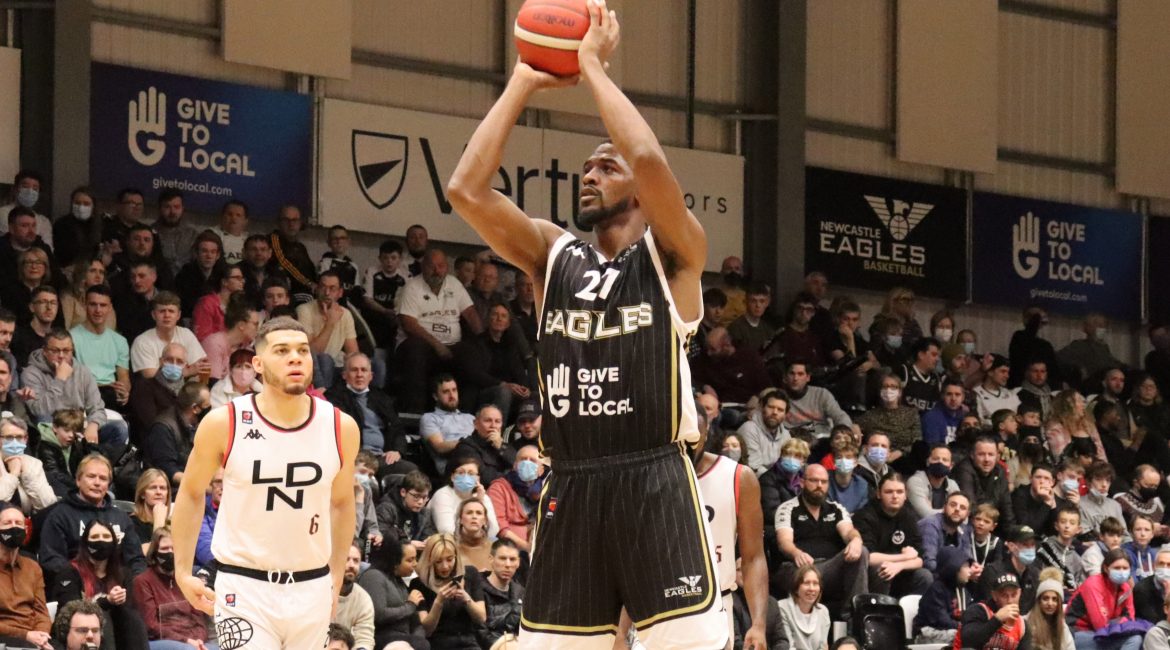 The Duke of Newcastle is taking lessons from Darius Defoe when it comes to securing the Eagles’ proud BBL dynasty.

And the club’ s new crowd favourite revealed the league’s most decorated player is the man with a plan in his twilight years.

And ahead of Friday’s Vertu Motors Arena showdown with Bristol Flyers, the former gave a fascinating insight into his veteran colleague.

“First and foremost Darius is a great team-mate and a great person,” said in-form Shelton.

“I love playing alongside the guy. I suppose I’m getting closer to the veteran stage of my own career but I look at Darius and he still has so much to offer to me and the rest of the new guys.

“He does the little things that make everything else a whole lot easier.

“And he taught me a great lesson when he said ‘it’s the smart work rather than the hard work that gets the job done’.

“Both of us love to work hard. But it’s the smart plays that give us the edge.”

But Defoe deserves credit for his own huge contribution against the Lions and the Phoenix after coming off the bench to score a combined 34 points.

Newcastle finally looked like the Eagles of old as they closed out much-needed back-to-back wins and Shelton added: “During the last five games we’ve shown some character and built an identity.

“After a rushed start to the season this is the first time where basically the whole team is fit and ready to play.

“Did I finally learn what it means to be a Newcastle player last weekend? I think so.

“Historically this franchise has the most championship wins in the BBL and we need to play like that.

“The performances against London and Cheshire prove we can.

“The Eagles are what other teams consider to be the best there is when it comes to British basketball.

“That means that the opposition will always bring their own best game when they play Newcastle and even more so when we’re at home.

“We know we can’t have any days off when we’re wearing an Eagles’ vest.”

Shelton has shone for his new club this season even during the club’s slowest start for more than 25 years.

And the electric forward has won a place in the hearts of the Newcastle faithful with his fist-pumping, chest-beating approach to BBL hoops.

“I love the atmosphere created by a full house at the Vertu Motors Arena,” he added.

“Last Friday against London I felt I could hear every voice inside the place encouraging me and the guys.

“I’m a high energy player and I’m fuelled by the fans.”

A third win on the bounce against Bristol this week would be Newcastle’s best sequence of results this season.

And Shelton added: “The goal is to follow up on last weekend’s win with another statement victory.

“I’ve learnt that nobody plays the game of basketball perfectly and we won’t be perfect against the Flyers.

“The way I see it, it’s which team makes fewer mistakes.

“If we can take care of the ball better than Bristol and execute our game plan better than they do then we’ll be in a great position to win the game.”

Tickets for Friday’s BBL Championship clash are on sale now from the box office.