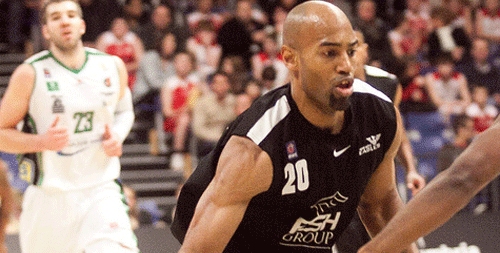 Whatever happens at the BBL Cup Final on Sunday, the next few weeks will see Fab Flournoy further cement his legendary status.

Pitched against a classy and talented opponent like Leicester Riders, it’s a brave person who would bet against the phenomenal Esh Group Eagles Newcastle player-coach from adding another piece of silverware to his glittering resume.

However, win or lose on his old stomping ground of the National Indoor Arena in Birmingham this weekend, Flournoy is going to deservedly take the headlines soon.

For he is rapidly bearing down on a multitude of astonishing BBL achievements and not least his remarkable winning record, which will establish him as a bonafide BBL great.

He is now only a few weeks away from surpassing another former Sharks and Eagles ace in Peter Scantlebury as the player with the most BBL Championship appearances in league history.

Flournoy already sits proudly at the top of the BBL Championship all-time steals chart and his longevity means he is now hunting down top placings in blocked shots and assists, as well as potentially breaking into the top three for rebounding.

However, it’s his mind-boggling 70% plus win record in games played over the duration of his career, which really tells the story.

It’s little wonder he recently explained how much he is driven by the losses. With a record like his, you could afford to recall the modest number of defeats in vivid detail against the backdrop of an astounding deluge of victories.

With a list of trophies longer than anyone else, Flournoy is determined to add another notch to his honours list on Sunday – although he knows it will be a brutally difficult match-up against the holders.

“They are just a very solid and disciplined basketball team,” said Flournoy.

“You can’t pick one player to focus on at all.

“Their team defence is the way they control games and offensively, they have numerous players who step up whenever they are needed.”

He was also quick to dismiss any concerns over his team being potentially under-cooked heading into the big showdown, in respect of their inaction last weekend.

“It’s not something we worry about,” insisted Flournoy.

“We have had a chance to rest up and get healthy which was critical to us.

“Our preparation week to week depends very much on the schedule.

“This week is rare in that we have no game on Friday so a little more time to prepare, but other than that, it’s very much as normal.”

The Eagles also counteracted their inactivity by completing a convincing victory against 2014-15 BBL entrants Leeds Carnegie in a friendly at Sport Central last night.