Corkin’ Result For In Form Eagles 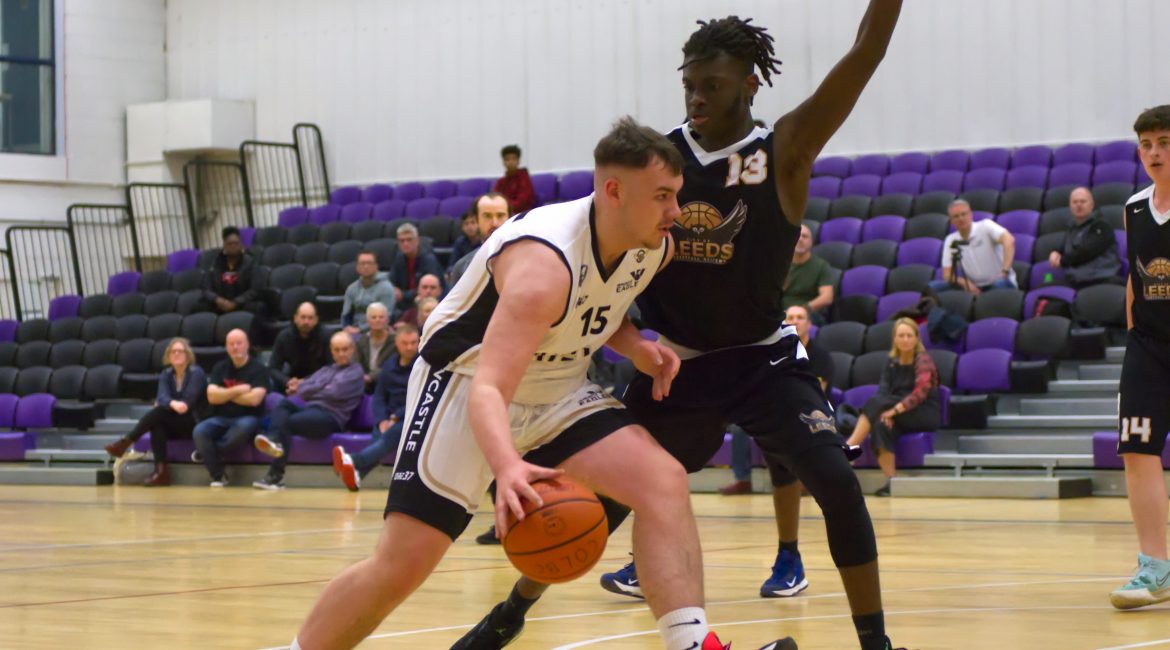 A flurry of towering triples from Joe Corkin paced another impressive win for in-form Newcastle Eagles Under 16 boys.

The boys in black hit the road to take on Northern Premier rivals City Of Leeds.

And Corkin’s deadly accuracy from downtown was just one of the many highlights as Newcastle bagged a huge 83-21 victory.

One of this season’s shorter trips meant the visitors didn’t take long to shake off their bus legs.

And Corkin’s three triples in quick succession established the platform for a convincing performance.

Academy Teams Pile on the Points

Pedro Omere’s relentless work under the glass, coupled with some neat finishing from Toby Dawson, kept the Eagles in control.

And Newcastle’s punishing defence allowed the Tynesiders to take a 24-5 lead into the second quarter.

Reuben Hezekiel hit a brace of two-pointers as the Eagles piled on the pressure and more rock-solid defence helped establish a 31-point lead at the half.

With the result no longer in doubt coach Calvin George took the opportunity to try some new rotations after the break.

And Newcastle’s emerging stars rose to the challenge to complete a convincing win in style.

Newcastle Eagles Under 14 boys were involved in the game of the weekend against namesakes York.

But a thriller of a clash finally went the way of the Yorkshire club as Chloe Gaynor’s side slipped to an agonising five-point loss.

Leo Degnen-Potter opened the game in thrilling style with a towering triple before some cool shooting from the bonus stripe, courtesy of George Merrifield and Jakub Bobkowski, underpinned a strong start from Newcastle.

Ben Lumley and Leo Glaholm opened their accounts before the end of the quarter with little to choose between two fully committed teams.

It was the same story in the second period as Newcastle continued to make their free throws count.

Bobkowski and Aston Hall made no mistake from the bonus stripe while Tom Beall found his range from beyond the arc.

The tables finally turned after the break as Gaynor’s side slipped into foul trouble and York took full advantage to take a five-point lead into the fourth quarter.

Newcastle fought back as Merrifield, Hall and Degnen-Potter hit the target to tie the game.

But York launched an offensive tear of their own to open up an 11-point lead and with just 48 seconds on the clock it looked like game over.

And Newcastle reduced the deficit to just five but it was too little, too late for the battling boys in black as York sneaked a 64-59 win.

Gaynor’s side is back in action this weekend when Team Birmingham Elite visit the Vertu Motors Arena.

Another eye-catching clash saw Newcastle Eagles Under 14 girls test a strong Manchester Mystics side before running out of steam down the stretch.

The hosts trailed by just five points heading into the half on the back of a strong offensive display by Sophie Hawkins.

But the Mystics stood firm after the break and took a deserved 71-57 win back across the Pennines.

There was little to choose between the two sides before half-time and Newcastle started the stronger — a quick turnover allowing Lexie Cardwell to open the scoring.

Manchester rallied and the visitors capitalised on some loose Eagles possession to open up a 16-12 lead.

But the Mystics extended their lead to five points heading into half-time and a strong third quarter kept the Eagles at bay.

But fatigue was forcing a series of defensive lapses and Manchester took full advantage.

A flurry of fourth quarter turnovers made the Mystics’ task far easier and, despite a late rally, the Eagles couldn’t find a way back.