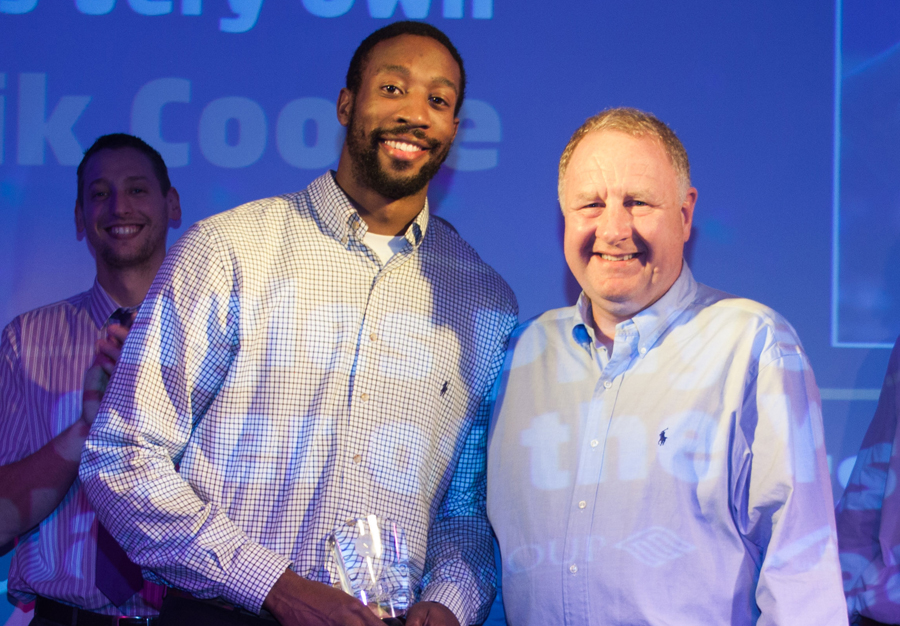 Nearly 300 guests attended the evening gala, where the season’s events across the entire programme were reviewed.

Rewards were received across several categories on the night but the star of the evening was Malik Cooke who swept up Eagles Player’s Player of the Year for 2014, presented by Brian Manning, chief executive of the Esh Group.

Cooke, in his first year with the Eagles after graduating from the University of South Carolina and serving spells in the NBDL and Germany, was very pleased to receive the award;

‘I’ve had great season with the team and I’m here to support my fellow team mates, it’s a real honour to have been voted for this award by the rest of the guys, as I look up to all of them’.

Eddie Matthew picked up the Eagles School of Excellence Player of the Year for the second season in succession.

Team Northumbria Women’s programme has had a stellar year, picking up the EB National Trophy and the BUCS National Title along the way. The inspirational forward Dian Voynova was named MVP for the season.

After a tough season in EBL Division One competition and a creditable 5th place in the BUCS Play-Offs, Marc Steutel’s Team Northumbria Mens programme named Matt Martin as their season’s MVP.

Eagles Wheelchair programme, delivered in partnership with Percy Hedley Sports Foundation were out in force to support their own season MVP David Ion. David moves to Germany this summer to compete in the Grman professional league to further develop his game.

Special Achievement awards were presented to Eric Wilson, for 10 years of tireless service as Eagles Team Manager and Tayani Clark for her support to Eagles Community Foundation and the Team Northumbria Womens programme over the last four seasons.

The dinner raised valuable funds for Eagles Community Foundation’s continued activity in growing the sport of basketball in the North East of England.

The Eagles now move on to complete the season with BBL Play-Off semi-final action over the horizon. The team travel to Leicester Riders this Thursday in the first leg and entertain the Riders at Sport Central in the second leg this Sunday May 4th at 4pm. The winner will take the road to Wembley Arena on May 11th.