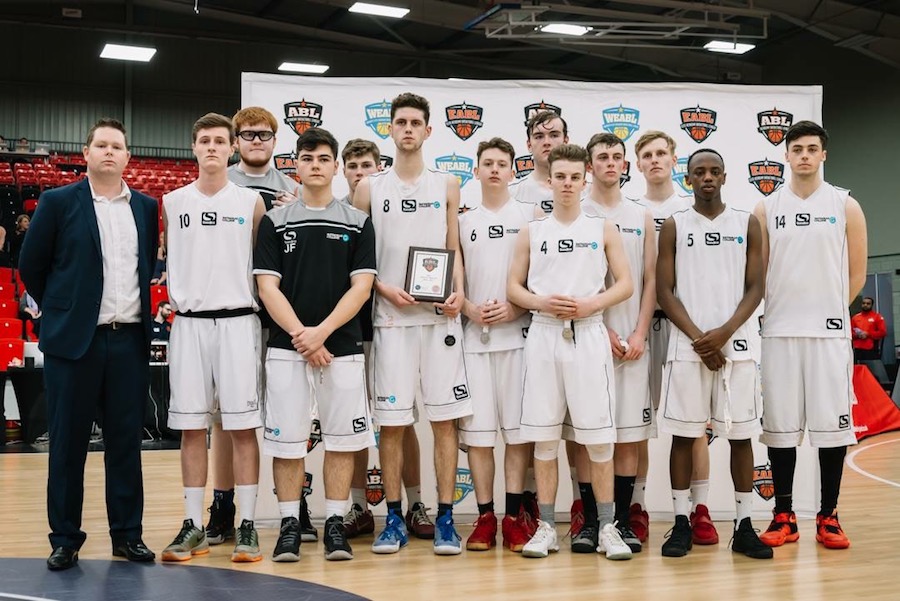 The ABL is pleased to announce the individual awards for the 2016-17 regular season, as voted for by coaches around the league.

This season saw the league expand to four divisions with 30 teams competing in the second year of the ABL.

Eisley Swaine, Hayden Alcindor, Kayne Henry-McCalla and Bryan Ejumeta earned the top honour of Player of the Year in their respective divisions.

Queen Ethelburga’s Swaine impressed in the Far North division and led the whole league in scoring with 32.6 points per game having had a fantastic stretch to end the regular season. He also averaged 6.9 rebounds, 3.1 assists and 3.1 steals per game.

“I can’t say I could have won this award without the support of my teammates and coaches,” said Swaine.

“It has been a really good year both on and off the court surrounded with an awesome group of people, pushing me day in and day out.”

Swaine is joined in the All-First Team in the Far North by Aston Manor’s Zack Powell, Nathan Johnson of Carmel, Gateshead’s Ilja Fjodorovs and Ben Hogg with the Tyne Met big man also landing the Defensive Player of the Year award.

Meanwhile, Fjodorovs (12.0ppg, 6.6rpg, 2.8apg) helped Gateshead to a strong season with a number of all-round contributions with Hogg (17.4ppg, 12.8rpg, 2.5bpg) impressing at both ends of the floor for Tyne Met.

Ian MacLeod takes the Coach of the Year award in the Far North after leading Gateshead to an impressive regular season record and they would eventually finish the campaign as runners-up.

“It’s a great honour to be recognised by my fellow coaches,” he declared. “We’ve had a year to remember and although we fell one step short, the experience the players have gained and the distance they have travelled in their development, is huge.

“Really, this is a testament to them, their hard work and their great attitude that they have displayed all year. They made my job extremely easy.”

In the East/Midlands, Alcindor completes a double after also picking up Defensive Player of the Year to go with his Player of the Year accolade. The Moulton forward averaged 17.9 points, 11.0 rebounds, 2.9 assists as well as 3.6 steals per game.

Ngobeh (17.0ppg, 7.8rpg) was the second leading scorer for Moulton, just behind Alcindor, while Birchenough (18.0ppg, 6.8rpg) helped his side pick up nine wins in the regular season.

Coach of the Year award in the East/Midlands went to Rob Crump as his Moulton side sailed through the regular season without tasting defeat after finishing a perfect 14-0.

Henry-McCalla helped St Charles to the ABL Championship title in Leicester last week and he was also named Player of the Year for his performances in the London division. The athletic wing put up 23.0 points per game on average, whilst shooting 50% from the floor and adding 5.2 rebounds per outing.

He represents St Charles as one of five different teams in the All-First Team with Alec Reed’s Carl Campbell alongside Leyton’s Deividas Lygutas, Arbnor Haliti of Hackney and Haringey forward, Sheik Sheriff.

Campbell (18.2ppg, 10.8rpg, 2.8bpg) led the league in effiency and was also in the top 5 for blocks behind Sheriff (16.6ppg, 12.9rpg, 3.2bpg) who got stronger as the season went on with Haringey with both earning Player of the Week honours at one stage.

Lygutas (16.7ppg, 13.5rpg) finished second in rebounding across the league after starring for Leyton, while Haliti (17.1ppg, 4.1rpg, 2.9apg) stood out for Hackney as their leading scorer.

Alec Reed’s Elias Poorman (11.2ppg, 6.6rpg, 5.5apg, 4.8spg) did a bit of everything for his side and was rewarded for his defensive efforts with the Defensive Player of the Year award.

Andrea Boreland was voted as Coach of the Year having led Hackney to an 11-3 record in a competitive division.

“This is quite a shock for me but I am grateful to all the coaches that voted for me,” she said.

“It was a great season in the London Division and one I can expect every season with the good teams coming in and competing and playing hard every game.

“And I would like to say thank you to my players because without them it would not be possible.”

Ejumeta overcame two team-mates to win the Player of the Year award in the South/South London division having averaged 21.5 points per game on 62.5% shooting along with a team-high 8.3 rebounds.

Nelson (12.6ppg, 7.9rpg) was another key contributor for Corelli and also picks up the Defensive Player of the Year award with Horacio Rowe (12.0ppg, 5.4rpg, 4.7apg, 5.7spg) also impressing with his all-round efforts.

Meanwhile, Eze (9.6ppg, 8.5rpg) helped QK to four wins in their maiden campaign as they just missed out on the post-season, while Griska (12.2ppg, 7.2rpg, 2.6spg, 2.0bpg) was influential for Erith as they were narrowly pipped to top spot.

Corelli’s Joel Moore is named Coach of the Year as Corelli finished with an 11-1 record to lead the way in the division ahead of the playoffs.