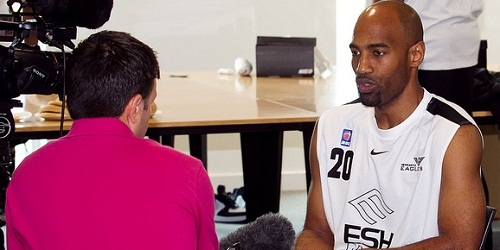 Newcastle Eagles player-coach Fabulous Flournoy was delighted as his side continued their unbeaten start to the season with a pair of wins over the weekend.

The Eagles won 91-82 at BBL new-boys Manchester Giants on Friday before returning from their visit to the new Emirates Arena in Glasgow with a 106-84 victory against old rivals Glasgow Rocks.

“We had a very rewarding weekend” said Flournoy. “Both games were litmus tests for our opposition and our composure in the fourth quarter of each game really impressed me. Manchester played a terrific game, even when we went up 20 in the third they kept coming back at us and played without fear. Their guards can put up points in a hurry and both Stef Gill and David Watts shot the ball really well. Nathan Schall was a handful on the boards and Jeff Jones made some smart in game adjustments. We had a solid all around game from Darius [Defoe] and a nice impetus from Ant [Martin] and Kareem [Maddox] off the bench.

“Against the Rocks we had to match the energy of the game with a big crowd, new arena and Kieron Achara making his debut. I was happy how we withstood their runs and looked after the ball. Having only nine turnovers against one of the most physical defensive teams in the league was a great achievement.

“Charles [Smith] led the way but I have to appreciate how our team shared the ball and got the open look. Joe Chapman is averaging over five assists this year as he adjusts to the extra focus he gets from being the current MVP and Damon Huffman is around the same number.

“Finally it was a breakout game for Kareem Maddox and at times he dominated the game both offensively and defensively. EJ [Harrison] played really well for the Rocks and Andy Wedemire brought an enormous amount of energy. The venue is a major step forward for the Rocks and the BBL and it was great to play in front of such a large crowd.”

Eagles return to action at Sport Central on Friday evening when neighbours Durham Wildcats are the visitors in the BBL Championship.