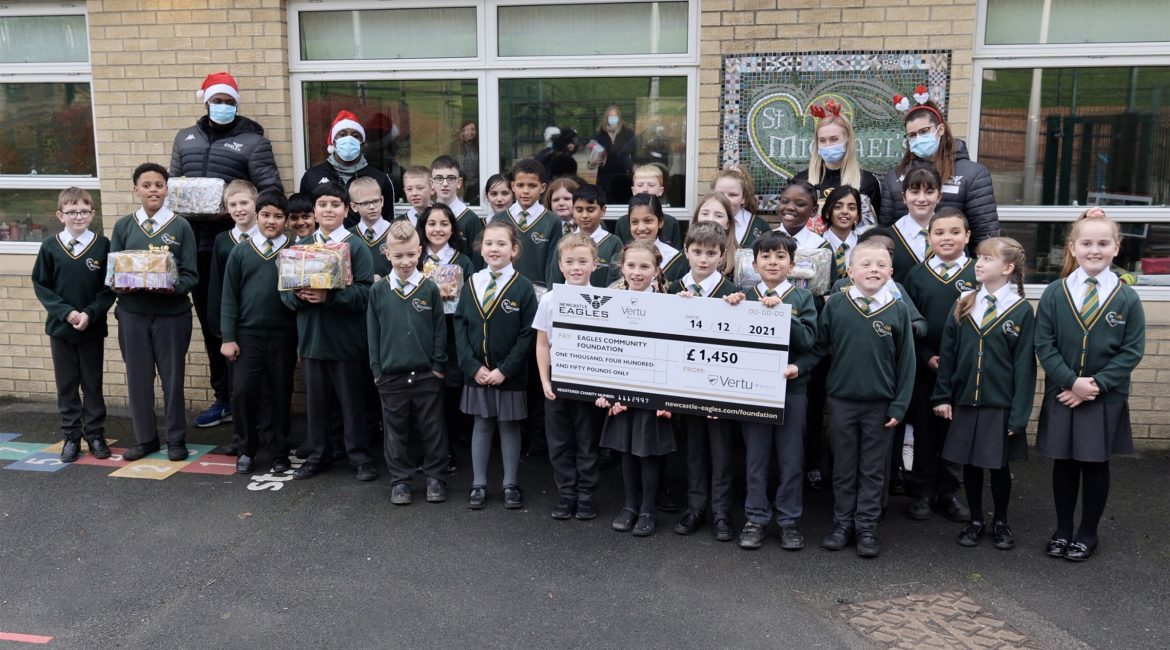 Some of the biggest stars in British basketball shot to the hearts of star-struck school kids after delivering the perfect early Christmas present.

Members of the all-conquering Newcastle Eagles surprised pupils at St Michael’s RC Primary School when they rolled up armed with a pile of festive hampers and gifts.

And almost £3,000 worth of donations will go directly to families across the West End this Christmas.

And Eagles’ US skipper Rahmon Fletcher admitted: “It’s great to see the smiles on the faces of so many kids at what should be a very special time of the year for everyone.

“Our loyal supporters and the generous people at Vertu Motors have made a real difference to families across the West End.

“Thanks to that generosity we’ve brought some happiness to the pupils at St Michael’s and it’s been a privilege to be a part of that.”

Vertu Motors matched the magnificent total — enabling the Eagles Community Foundation to provide holiday hampers for families on their doorstep and beyond.

And a few lucky pupils at St Michael’s even got to take part in some Christmas fun and games as Fletcher and team-mates, from Newcastle’s men’s BBL and women’s WBBL teams, made it a day to remember.

David Crane, Chief Operations Officer at Vertu Motors, added: “We’re delighted to be able to support local projects like this one.

“Today’s work has been brilliant. We’re really pleased to see the joy on these pupils’ faces as they met their basketball heroes and received their early Christmas surprises.”

Fletcher admitted he loves nothing better than seeing local kids pack the Vertu Motors Arena on a game night.

And he said getting more children from all backgrounds playing basketball at school remains at the heart of Newcastle’s hugely successful community programme.

Susan Hunter, Chief Operating Officer at the Eagles Community Foundation, added: “As a Foundation our aim is to work with all of our partners to support our local community in any way we can.

“The surprise visit to St Michael’s highlighted those positive partnerships in action.

“The generosity of our Eagles family during the weekend was phenomenal.

“For Vertu Motors to match the value of those donations is fantastic. We’re extremely grateful for their ongoing and overwhelming support.”

St Michael’s will work alongside local community groups to distribute the Eagles’ hampers and use the matched funding from Vertu Motors to purchase additional food to create further hampers.

Headteacher Charlotte Chapman said: “It’s fantastic to have the Newcastle Eagles, the Eagles Community Foundation and the Vertu Motors Arena based in the West End of Newcastle.

“The donations are greatly appreciated by the entire community. The children have had a brilliant day and a perfect start to their Christmas — they’ll remember this day for a long time!”