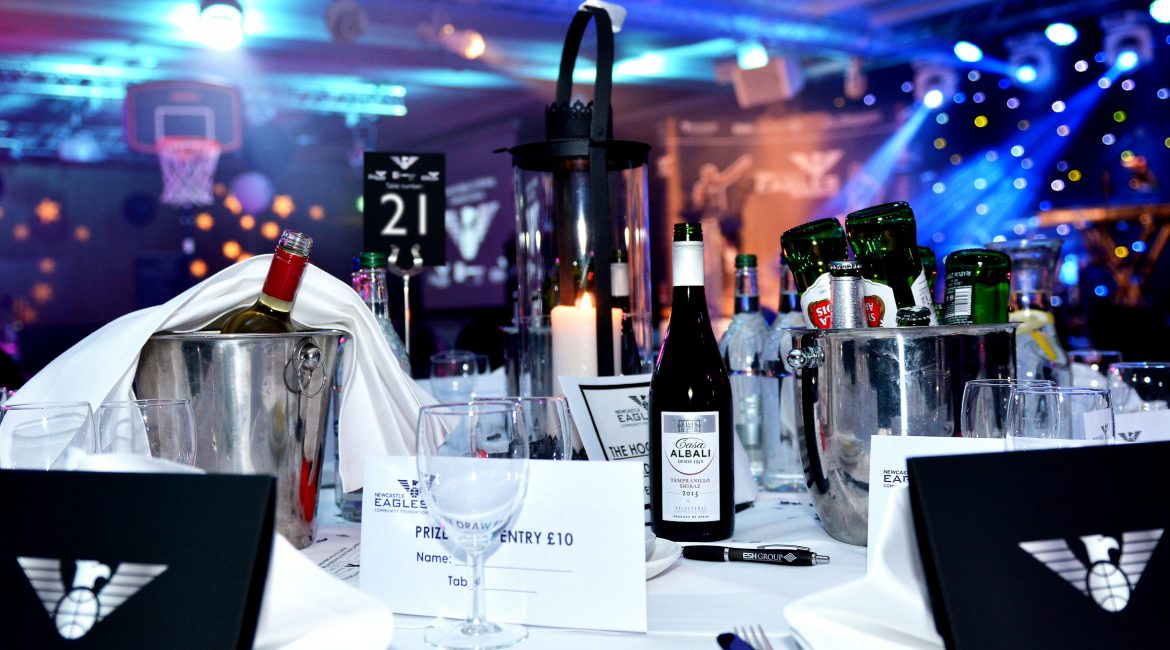 It was our annual foundation dinner and awards evening on Monday night, which this year celebrated the 21-year legacy at the Newcastle Eagles Basketball Club.

Three hundred generous benefactors and invited guests joined us at the Newcastle Marriot Hotel Gosforth Park for a night of fun and fundraising to continue the work of our Eagles Community Foundation across the region and to congratulate the recipients of six accolades.

Proceedings were hosted by our game-night entertainment presenters Dan Black and Howard Leighton who began the evening with a drill from the newest recruits to our foundation, the Mini-Eagles, led on stage by their coach Anthony Forrester. 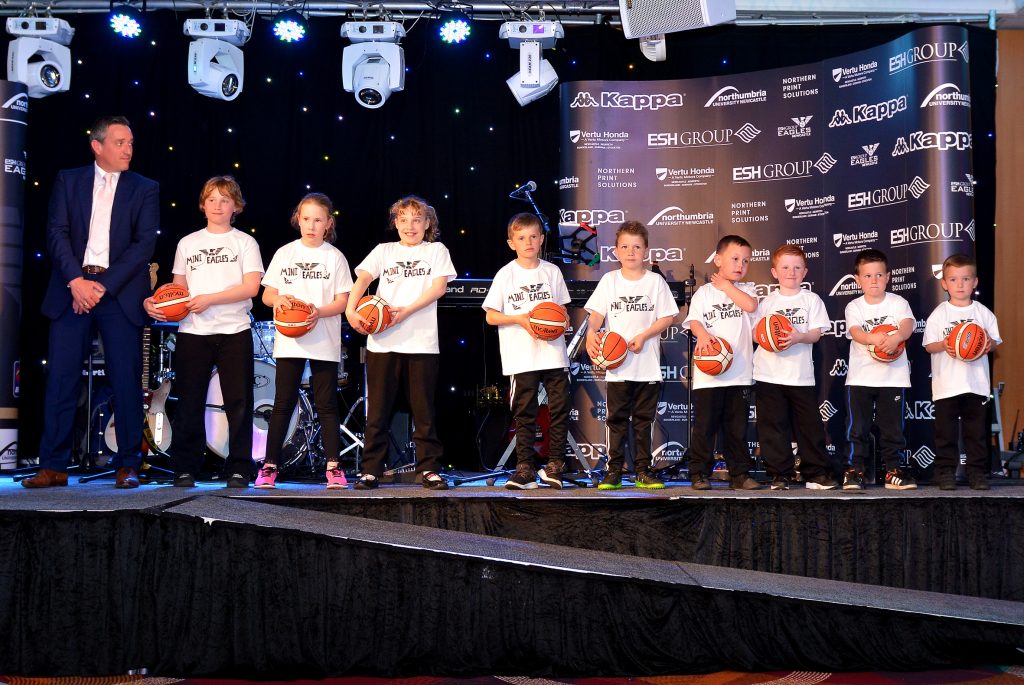 It is the first year that the Mini-Eagles programme has existed in its new form with over 40 children between 5 and 8 years-old taking part in training and fun competitions on Saturdays at Emmanuel College. Having those 10 players on-stage served to demonstrate how the foundation has expanded its programmes even further and pushes on with benefitting the lives of many thousands more young people across the region through basketball coaching and healthy lifestyle education.

This new generation of Eagles took a bow and were applauded off to bed as Eagles Managing Director, Paul Blake, joined Dan on stage to share the progress being made behind the scenes towards building an arena of our own. Paul also took this opportunity to thank everyone who has supported both the club and foundation in so many ways over the 21 years that they were at the dinner to celebrate. The arena will be a home for the club, its foundation and basketball as a whole, opening up new possibilities for the future of the sport in the North East community. 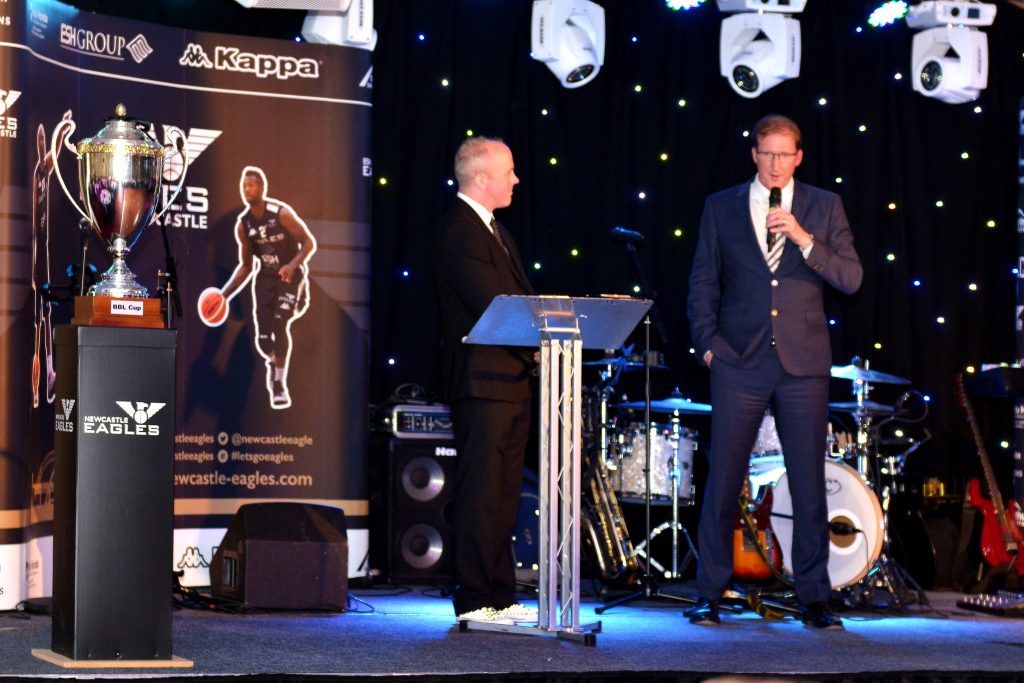 Next up it was a round of the Hoops 4 Health Clap Game led by Fabulous Flournoy who also took his first chance on the mic to add his gratitude to all of those who have been a part of the Eagles’ legacy to date, attributing his MBE along with success as a player and coach to the whole organisation and all those involved. 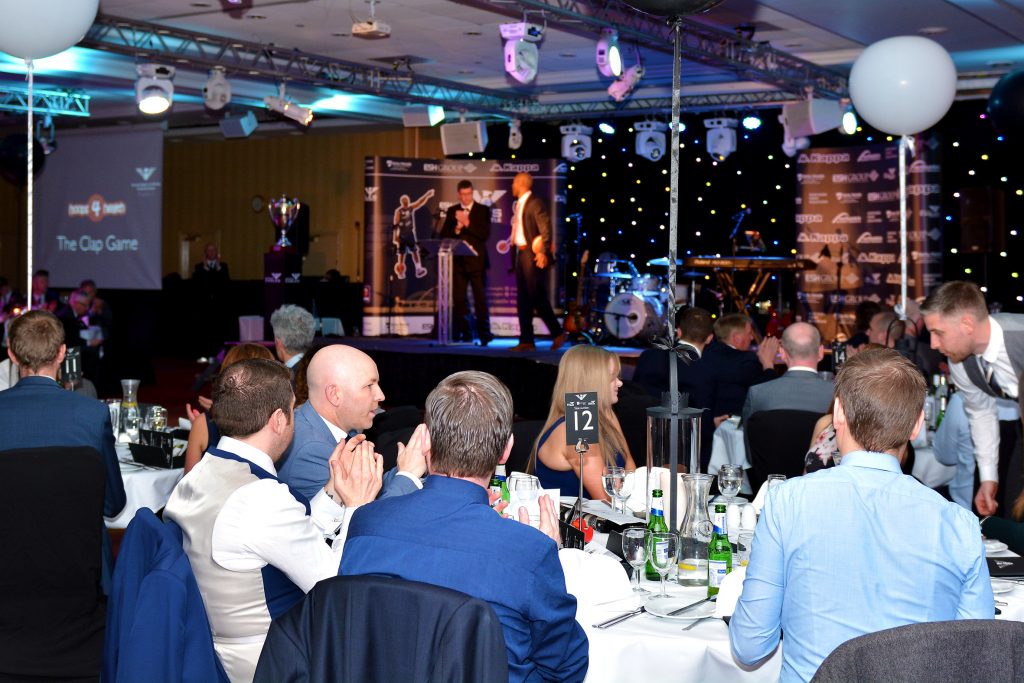 The first award of the evening was the School of Excellence Player of the Year 2016-17, presented by Rob Parkin from our Under 18s sponsor Specialist Panels UK Limited, which went to Themba Yabantu.

Coach Graham Heath noted that Themba’s 9 years involved in basketball and having progressed through the player pathway structure had made him a player that goes beyond just playing on the court. Themba entered the Eagles programme in the West End of Newcastle with the Westgate Hoopstars junior club, playing in our Central Venue League, and now he has excelled with our Under 18s Academy team.

“Themba is one of the hardest workers in training and leads by example both on and off the court” Coach Heath added. “He is respected both by their teammates and coaching staff and has a great personality to go with an outstanding skill set as a player. 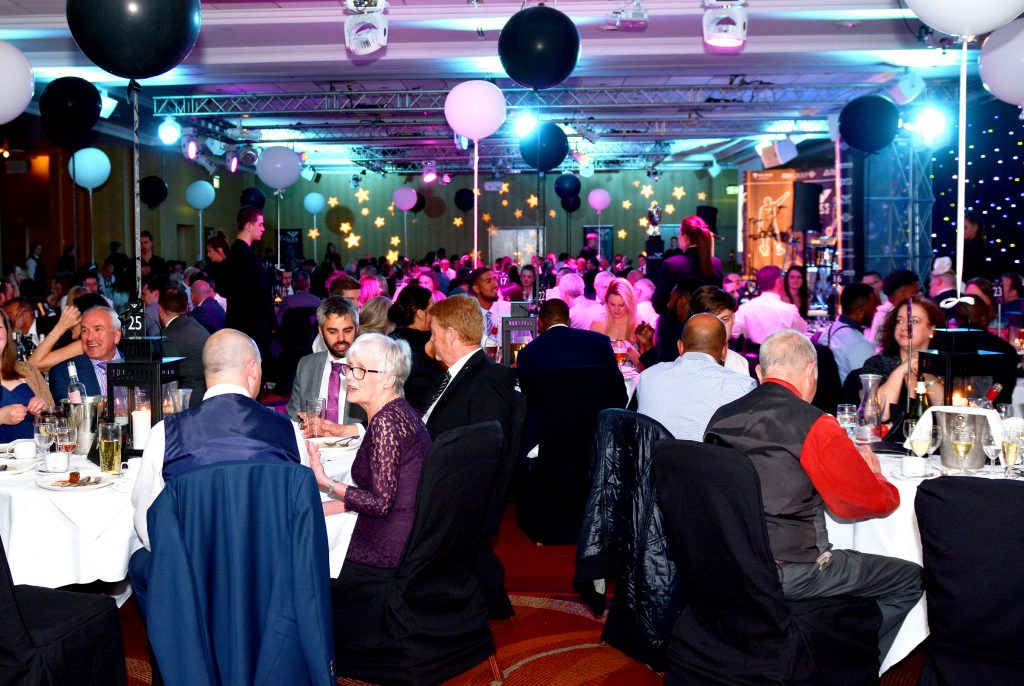 The next awards of the evening were for our Team Northumbria WBBL and NBL Division 1 Most Valuable Players of the Season respectively.

Coach Bunten described her as a player who “has never taken her foot off the gas”, adding “she is a unique player and a fearless competitor who can take over at both ends of the court”. Gorrell heads to the WBBL Play-Offs as the 3rd leading scorer of the regular season and 7th in rebounding.

It has been a historic season for the squad who won both their league and the national cup. Team coach Marc Steutel noted that “Smith is a tremendous player and a better person. He is hard-working, humble, skilled, committed and tough beyond measure. Malcolm deserves MVP after a fantastic season in a history-making year for the organisation.”

Another key partnership for the Eagles is with the Percy Hedley Foundation for our Wheelchair Basketball Team and Hedley Sports coach Kat Easson presented their MVP award for this season to Michael Hutchinson.

Every year a Special Award is presented to a different member of the staff and volunteers in honour of their services to the club and this year’s winners were the Hunter family. Lynne, Alison and Emma have been a part of the Eagles family for almost all of the 21 years that we celebrated on Monday night and they took to the stage to rapturous applause as three well-known and much-loved faces by everyone at the Eagles.

The final award of the evening is the Esh Group Eagles Newcastle’s Players’ Player of the Year and with a game-night style introduction our BBL team, along with the bench and backroom staff, filled the stage for the presentation by David Halfacre from our main sponsor Esh Group. 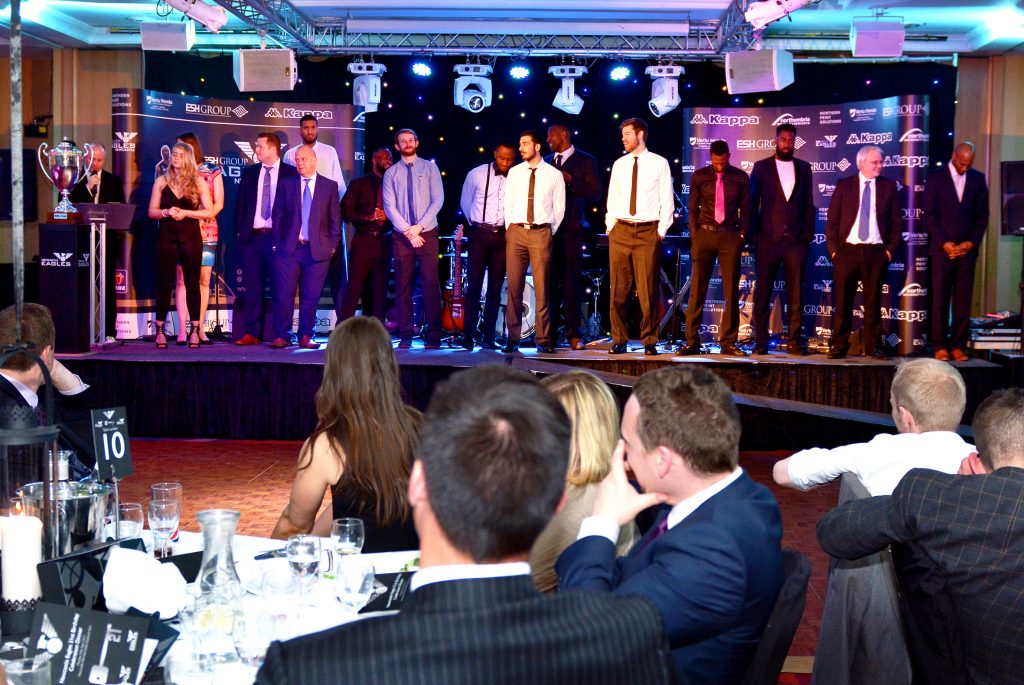 For the second year running the winner was Rahmon Fletcher who this season also picked up the MVP trophy at the BBL Cup final following being crowned 2015-16 BBL Championship and Cup Final MVP.

Fletcher said “these guys are family to me, being over here so far from everyone back home, so to receive this award is more important than any stats I might get during the season because it means so much coming from my teammates.” 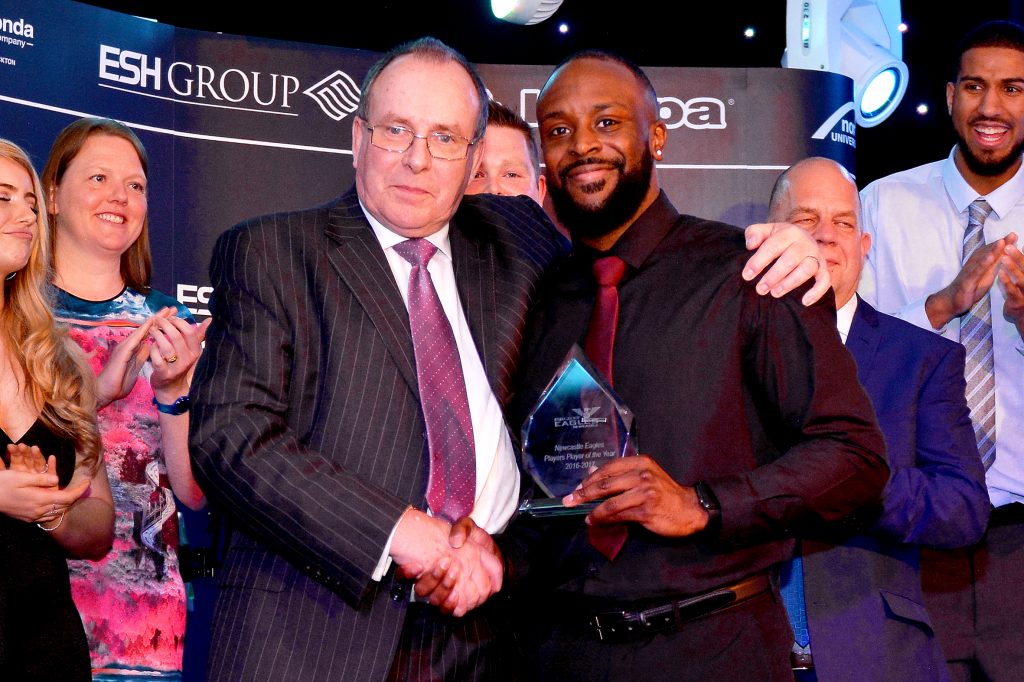 The stage is set for our Eagles’ final few games before the summer break as we begin the BBL Play-Offs this weekend. After flying away to Bristol Flyers in the Quarter Finals on Friday night we are on our home court of Northumbria University Sport Central this Sunday for the second leg. Tip-off is at 5pm and tickets can be purchased in advance here on our website or by calling 0191 245 3880.

For your last chance to party with our Eagles before the summer break join us at our End of Season Supporters Club Party on Monday 15th May at the Jurys Inn NewcastleGateshead Quays. For ticket details contact the Eagles office or visit the supporters club desk at a game-night.