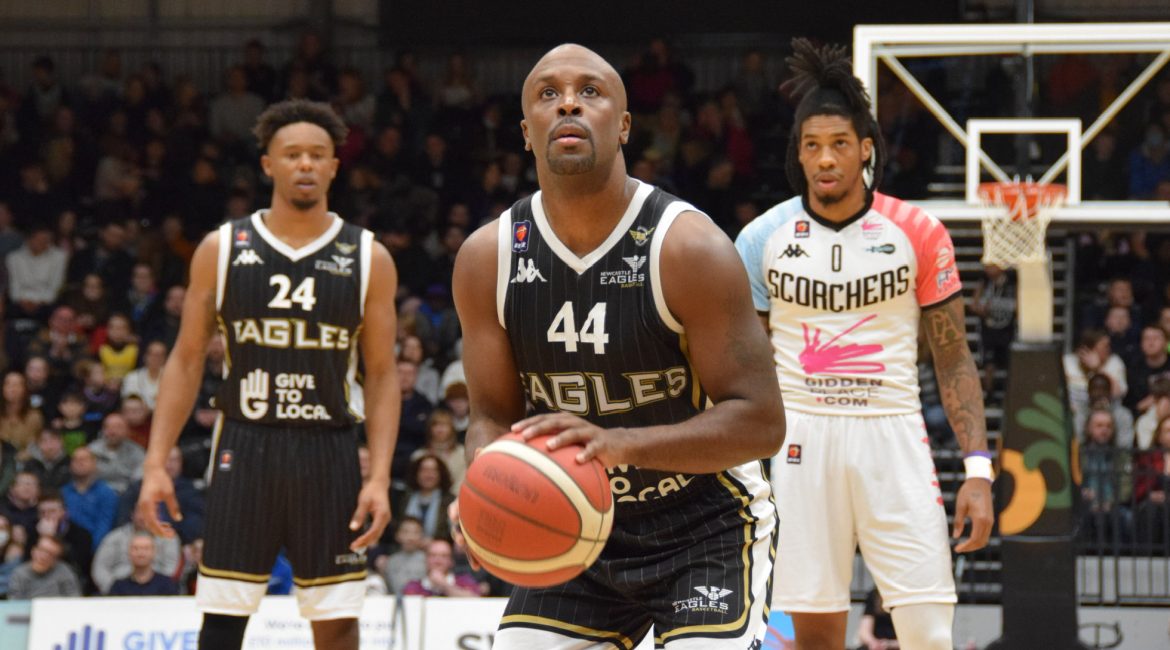 Justin Gordon is bracing himself for a ‘battle’ with old buddy and former team-mate Rahmon Fletcher this week when Newcastle Eagles lock horns with Manchester Giants.

Friday’s Vertu Motors Arena clash marks the homecourt return of Gordon after the US star inked a third deal in as many seasons with the Tynesiders.

But ex-Eagle Fletcher will command equal billing as two of the BBL’s biggest stars go head to head in front of an expected sell-out crowd.

“It’ll be completely different facing Rahmon rather than suiting up alongside him,” admitted Gordon.

“We’ve kept in touch over the last few months and of course we’ve talked about the changes in the BBL.

“I’m just pleased that a player of his quality is still playing at a high level.

“Hopefully we’ll have a good battle on Friday.

“I don’t expect we’ll see too much of each other close up on court but it will be cool to see Rahmon again — even in a Giants vest.”

And the 29-year-old wasn’t alone in flattering to deceive as Marc Steutel’s men looked like a shadow of the team that had racked up three wins in four prior to the cross-border clash.

The frustrated Eagles playcaller could barely hide his disappointment as the visitors missed far too many defensive assignments.

But like his coach, Gordon is convinced Newcastle boasts the talent to climb the Championship table.

“I’ve only been here a short time but I don’t think this team lacks talent,” added the well-travelled forward.

“It’s more about a new group of guys getting to know each other, playing consistently together and coming together as a team.

“As a team we need to focus on doing the little things well. Those are the things that can win us games.

“But it takes time to gel and in professional sport you just don’t get that time.

“We know we all have a job to do between now and the post-season. We have a tough task ahead but I can tell you that every player here is up for that task.”

Steutel — like the majority of the Eagles roster — is new to Gordon but that didn’t affect the 2021 BBL Cup MVP’s decision to make his latest mid-season move.

“I admit I didn’t know too much about coach Steutel before I started to look at coming back here,” he added.

“I knew about his national team links and what he’s achieved with Great Britain but I only really got to know him when we talked about my move.

“I liked what he had to say in terms of demanding honesty and accountability from all of his players.

“I appreciate his direct approach on the court and that desire to see players take responsibility for their roles.”

Gordon returned to Tyneside midway through last season after playing a key role for Newcastle during the double winning 2020-21 campaign.

But only Darius Defoe remains from the North Carolina native’s most recent spell with the men in black.

And Gordon admitted: “It’s very different to when I was here before.

“The venue’s the same and the owner’s the same but, Darius aside, it’s a completely different team.

“It’s certainly nowhere near as familiar as when I came back last year but of course I was prepared for that.

“Because it’s Newcastle Eagles it was still a fairly easy decision to re-sign for the club.

“I made this move from a career standpoint. It was purely a basketball decision but I’m coming into an environment where the fans know me and I knew they’d make me feel welcome.”

Less than 100 tickets remain for Gordon’s homecourt return on Friday and can be purchased from the box office.