Brilliant Bridge Too Good For Tigers 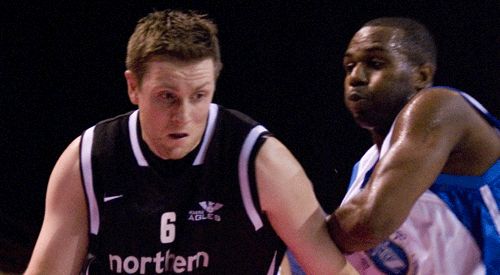 Newcastle Eagles bounced back from their BBL Cup Final nightmare to cruise past the Everton Tigers and all but put their name in the draw for the final four of the BBL Trophy. The Eagles, inspired by the brilliant Andrew Bridge, closed out a 16-point victory 48 hours after their heartbreaking loss to the Milton Keynes Lions in the BBL Cup.

The Tynesiders must now avoid a heavy loss inside the Braehead Arena on Sunday when they clash with Scottish Rocks to secure a place in the semi-finals of the Trophy. All eyes were on Richard Midgley as he threatened to return to send Fabulous Flournoy’s side crashing out of their second competition in 48 hours.

But, after picking up an injury in a clash of heads at the weekend, the British guard shied away from an on-court battle with his former employers as Henry Mooney’s men looked to put one over the Tynesiders. It was the Eagles who soared into an 8-4 lead as they looked to put early pressure on the visitors. Skipper Bridge proved to be the most potent threat as he spearheaded a 10-5 tear that gave the Eagles control of the contest.

The Great Britain star led the scoring on the night with 18 points, closely followed by Olu Babalola who recorded 17. The Clemson graduate hammered home eight points in quick succession to further put daylight between the two teams. But the Tigers went on the counter-offensive as they looked to find their feet inside the Metro Radio Arena.

Adam Nowell and Tony Miller combined to secure 16 points to keep Henry Mooney’s men within touching distance. The Eagles piled the pressure on the Merseysiders as they tried to pull away in the second period and it was Darius Defoe who stepped in to lead the point scoring.

The young Brit bagged 12 points in 10 minutes to give the home side a seven point lead going into the half time break. The advantage could have been bigger but for Defoe’s poor shooting from the bonus stripe. Having missed 4/4 in the cup final on Sunday, the 6ft 9in forward missed twice when he was put in at the line deep into the second period.

But coupled with points from December’s player of the month Charles Smith, the Eagles narrowly led the visitors after 20 minutes by 47-40. And after they blazed a 9-2 tear in the opening minutes of the third period, Flournoy’s men started to look comfortable.

GB-veteran Chris Haslam scored eight points to keep up the pressure but the North-East franchise maintained their lead going into the final period. The Tigers threatened to emulate the Milton Keynes Lions as they launched a late comeback.

A trio of huge threes from Calvin Davis trimmed the deficit to just seven points as he bagged a triple double, scoring a game-high personal of 26 points, with 13 rebounds. But Flournoy single-handedly held off the visitors, puncturing Everton’s basket run with three twos.

A big shot from just outside the paint by Babalola with two minutes left on the clock put the game beyond Everton before Lynard Stewart ran the length of the court to slam home a two. A 13-2 tear from the Tynesiders effectively ended the contest as Flournoy’s men closed out a 16-point game.