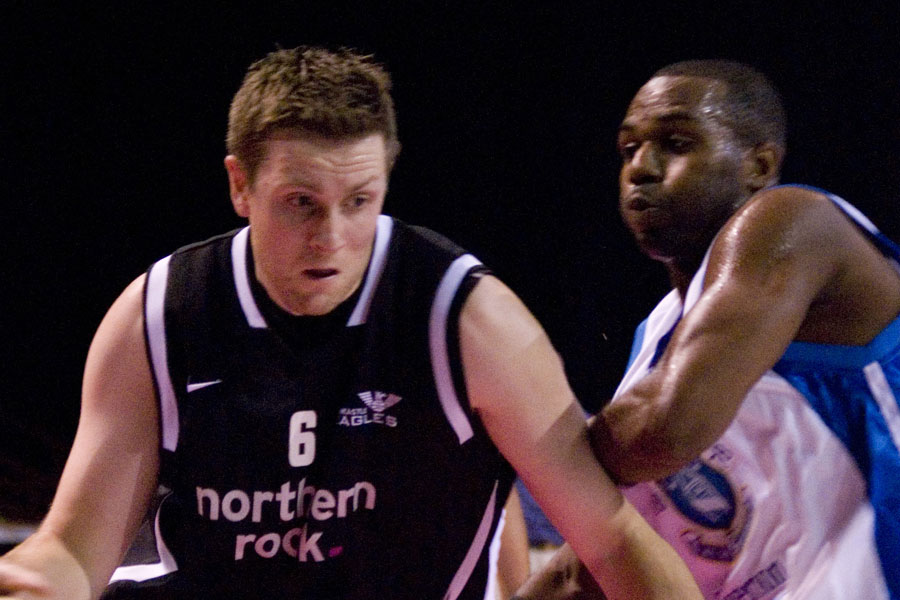 “The winner will be decided by the tempo of the game.”

That’s the view of retired BBL guard Andrew Bridge, looking ahead to the second leg of the BBL Cup semi-final between the Esh Group Eagles Newcastle and One Health Sharks Sheffield.

The Sharks go into Friday’s second leg with a three-point advantage and Bridge, who played for both the Eagles and Sharks during his 13-year BBL career, believes it’s too close to call.

“Considering the tie is so close, I think both teams’ approach will be just to try and win that game,” he said.

Picking Back Up and Bringing The Plan To Life

“If both teams are in a position to win the game going into the last few minutes, then Newcastle only have to make up three points. It could almost be a one-shot situation.”

Bridge feels that Newcastle having the game on their home court won’t necessarily make them the favourites to win.

“The way I look at it is that when we were at the Arena, that was a massive home court advantage for us and we never used to lose there,” he said.

“Newcastle have probably lost more games at Sport Central than they ever did at the Arena.

“So, I don’t think [home court] will be much of an advantage; I think it will be more to do with tempo.”

Since retiring at the end of last season, Bridge has been working as a Youth Sport Trust Athlete Mentor, part of the Sky Sports Living for Sport team, whose ambassadors include former footballer David Beckham and Olympic champion Jessica Ennis-Hill.

“I think I was great example as a player in that I didn’t have the most natural talent in the world, but just by working hard and making the right, smart decisions, you can have a career, and that’s one of the main messages I give.”

Bridge has a lot of fond memories of his playing career, which saw him pick up a many medals and his most-prized is the bronze he won representing England at the 2006 Commonwealth Games in Melbourne, Australia.

“I grew up playing junior basketball against the likes of Andrew Sullivan, Perry Lawson and Olu Babalola, and it was nice to win all those trophies with guys I knew.”

Having begun his BBL career in Sheffield in 2000, Bridge went on to enjoy a hugely successful time at Newcastle and in 2012, returned to Sheffield for one final season with the Sharks.

It would prove a good decision as the Sharks went on to win the BBL Trophy.