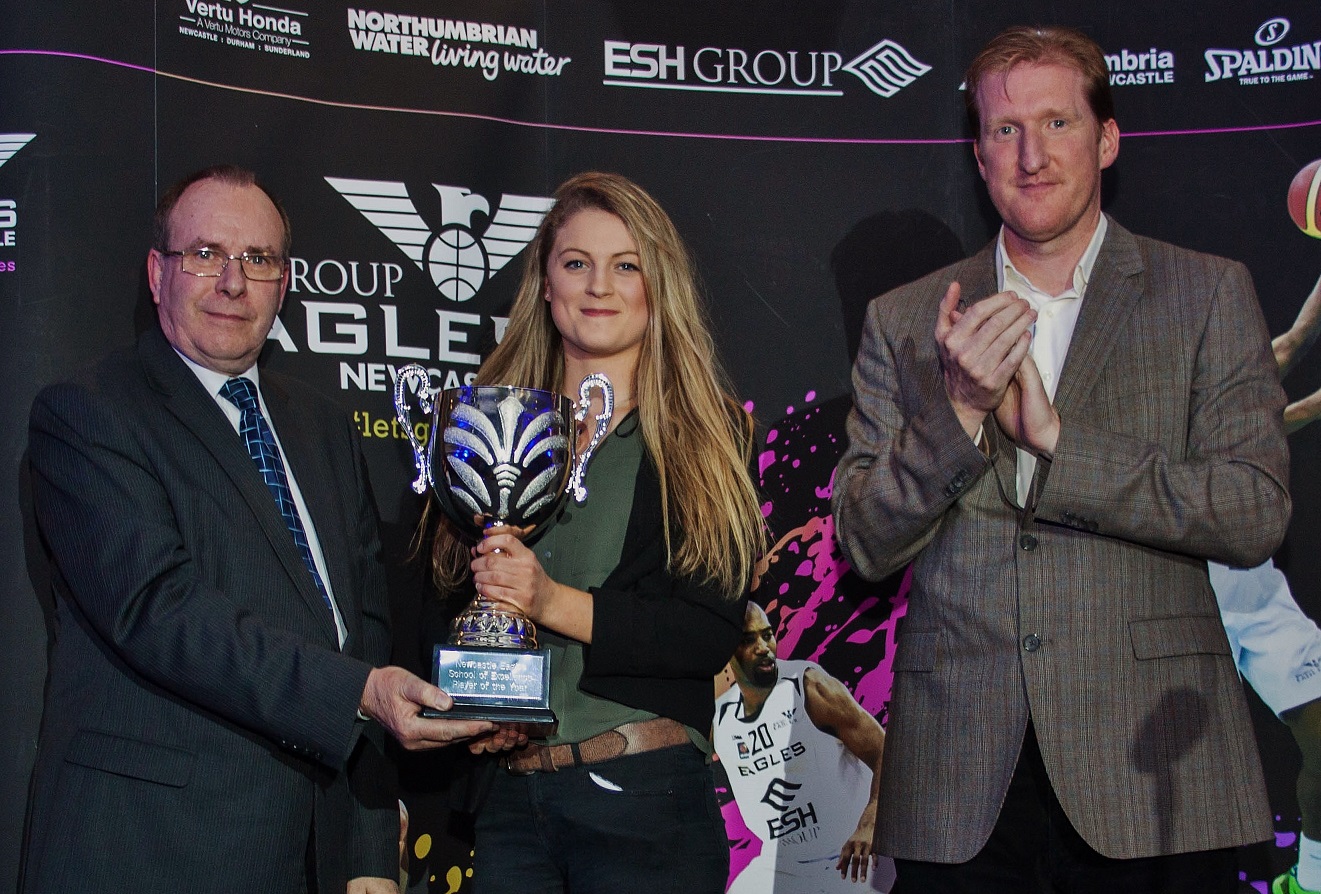 The 2015 School of Excellence Awards evening was held at The Marriott Hotel in Gosforth, compaired by Howard Leighton and Coach Graham Heath.

David Halfacre, chairman of the Esh Property Services and Paul Blake, managing director of the Newcastle Eagles were the guests of honours who took care of the presentations.

The night started with a short interview with Drew Lasker who stood in for the injured and unavailable Head Coach Fab Flournoy.

Each head coach gave a brief evaluation of their team’s performances from the past season.They mentioned the ups and downs, the individuals that stood out and their massive appreciation of the parents who supported the teams and donated their time to help make each team run smoothly.

They then gave a brief summary on the players they awarded the honours to before the awards for MVP, MIP and Best Defensive Player for each team.

The Under 15s were first up with Head Coach Eddie Gilchrist with a great speech on his rookie night. Below were his worthy winners.

The team showed some great signs of turning the corner after the Christmas break as they had a double win over Sheffield Junior Saints, a home win against Derby Trailblazers and a very narrow home loss to eventual league winners City of Birmingham.

The Under 16 Boys went next with assistant coach Aaron Thompson standing in for head coach Rafael Silva. Again even though he was put on the spot by the no show of Raf and another on his rookie night he delivered a very good impromptu speech.

The guys have had a great season with an unbeaten league campaign including a tough overtime win away to Doncaster… They have already dispatched Oldham Titans in round 1 of the play offs and they play round 2 this Saturday 11/4/15 at Westgate Centre for Sport tip off at 12.30pm.

Under 18 Women were next to take the stage lead by their co coaches Ruth Davison and Corinne Vaughan. They took to making their speeches like a duck to water even though this was their first season in charge of a national league team.

The ladies have in most peoples opinions played beyond themselves and have achieved so much more than it was expected at the beginning of the season. They are currently waiting to see if they have made the end of season show down in the play offs.

The Under 18 men then stepped up to the plate with head coach Graham Heath doing his 8th year and his able assistant coach Sam Roxborough. Their speech spoke about a lot of ups and downs along with some great support from parents of the players including a big weekend away in January where some great bonding was done.

Their season ended with 3 straight wins against 3 of the top 4 teams in their league who were moving on into the play offs. This bodes well moving forward for the players returning next season along with the new juniors who will step up from the Under 16 boys.

The wheelchair program was then represented by player/coach Adam Parry who was taking part in another S of E awards night.

Their season had been a massive re building year; they had started the season with only 6 players but have finished with 15. They hope this means a massive push to start results rolling next season.

We then came to the two major awards for the newly introduced Rachel Rushton memorial award for the over all most improved player… The award was donated to the School of Excellence by Rachel’s family after she lost her long fight against cancer earlier this year. The award will be awarded each year to a player who has shown great growth within the sport and a massive support to the program just like Rachel had done over the 6 years her son Chris has taken part.

This years winner came from the Under 18 men as he started to fine tune his game and develop into a leader and prolific scorer as well as showing some great defensive prowess. The award was presented by Coach Graham Heath to a very grateful Sean Murphy.

The final award was for the over all School of Excellence most valuable player, the winner was a first for the programme.

The School of Excellence player of year goes beyond just the playing on the court although this is an important element.  It involves sportsmanship, respect to coaches, officials and their team mates.

The winner of the 2015 School of Excellence Player of the Year, taking over the mantle from Eddie Matthew is Beth Wilson from the Womens Under 18 programmw.

Beth started playing in North Shields aged 11 and was coached by Steven Hall – playing in the boy’s team.

She joined the School of .Excellence in year 8 as a young, raw player more used to netball than basketball.

She was fist coached by Claire Webster, then had three seasons with Emma Ross and the last 12 months have been with Ruth Donaldson and Corinne Vaughan .

Throughout this period she was also perfecting her netball skills going to two England trials and securing a place in the Netball Performance league.  However, in September last year she dropped netball in favour of basketball and has put all her efforts into mastering this game.

In October last year she was selected for the England Under 17 development squad which has seen her spend time at their training camp in St Albans.

In recent months, with Chris’s coaching she has also had a couple of appearances for the team Northumbria WBBL team.

Plans are now being put in place to get ready to move the program on another notch and start the preparations for 2015-16. Well done to everyone that took part this year.

The club and foundation would like to thank all the coaches, parents and volunteers that gave up their time and effort to make sure that players had the best experience. See you in 2015-16!