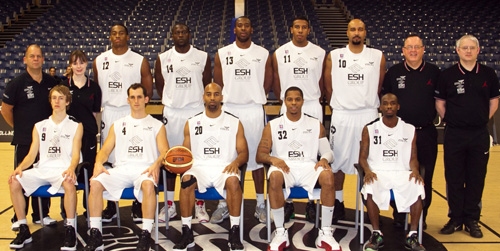 It’s a BBL Team Of The Week debut for Cheshire Phoenix guard Gabe Haskins after he produced one of his best displays of the season in the north-west derby clash against Mersey Tigers. He harvested 21 points in the game as the Phoenix followed up their off-court celebration last week with some cheer on the court, against their local rivals. The guard missed just one shot inside, drained three triples and completed an impressive evening of work by also adding five rebounds, four assists and three steals which helped the club maintain a play-off position.

It was a great individual weekend for Donald Robinson who grabs his first place in our line-up, after two excellent performances He racked up a game high 26 points against Jelson Homes DMU Leicester Riders at the Emirates Arena, although it wasn’t enough to ensure a win. However, 48 hours earlier, another vibrant display by Robinson was enough to help Rocks clinch a hard fought win at Manchester Giants and ensure a debut BBL Team Of The Week slot. He helped to hold off a strong finish by the Giants with an excellent 25 points, six rebounds, four assists, two blocks and one steal.

The forward loves playing against Durham Wildcats and having tormented them with a double-double of 16 points and 16 rebounds when the teams met earlier in the season, he tortured them again with another MVP performance as the Sharks claimed their third league win of the campaign. Tuck accumulated a massive 27 points, pulled down seven rebounds and added four assists and two steals at Newton Aycliffe. Tuck was just too hot to handle inside, making an impressive 10 of 14 under the hoop.

It’s a deserved first, and long overdue appearance for the forward who has been in great form over the past month or so. However, his debut spot in our line-up will arguably taste more bitter than sweet, since it did come as required, via a victory, but the win against Newcastle wasn’t enough to avoid being dumped out of the BBL Cup over the two-legged semi-final. Still, Schneck came so very close to being the star act of an incredible success by Raiders as they overturned a 17 point first-leg deficit but in the end, it just wasn’t to be. He finished with a brilliant valuation score of 32 after chalking up a stellar double-double of 28 points and 16 rebounds.

The Cheshire Phoenix centre is growing in stature as each month unfolds, and this is underlined by the fact that Bland secures his third appearance in the space of just five weeks which unsurprisingly, has coincided with an upturn in fortune for his team. Bland was powerless to prevent Newcastle Eagles from ending the winning home run of Cheshire, but he did put Mersey Tigers to the sword with 22 points thanks to a stunning 80% floor shooting display. He also corralled eight rebounds and showed why he is the leading shot blocker in the league with three monstrous blocks.