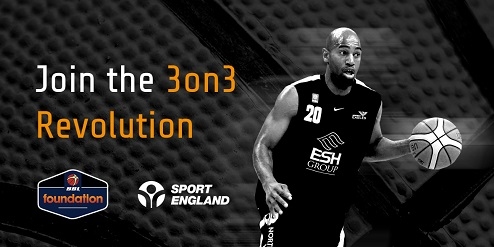 The BBL Foundation are delighted to announce that Proj3kt 3on3 its pilot participation programme launched last October in partnership with Sport England, using 3 on 3 basketball to engage with boys and girls in the 16-19 year old age group, has smashed its own attendance targets with over a month to go. The programme has now seen 5500 attendees at its sessions of 3 on 3 basketball delivered by the five BBL clubs taking part in the pilot scheme in the five months it has been running.

BBL Foundation COO Gary Atyes, who has been leading the project said “We are really delighted with the attendance figures we have seen so far. We set ourselves a target of 1000 attendees per club for the 6 months period, so to hit 5500 with a month to go is testament to the hard work the clubs have put in to deliver the programme.” He added “Plus in most of the FIBA member countries playing 3 on 3 throughout the world it is very much an urban outdoor activity, so testing this element in the UK during the winter months has not been without its challenges, and therefore makes these figures all the more encouraging.”

At the time the £200,000 grant was made Sport England’s Director of Sport, Phil Smith, said: “This investment will open up more opportunities for young people to get involved in this great sport and build on the momentum created by the inspiring summer of Olympic and Paralympic sport.

“We know many young people are interested in playing basketball and this partnership will help us understand more about the best ways to turn interest into participation and then keep them coming back week after week.”

Recently the BBL clubs who have been involved in Project 3on3 have been running regional tournaments, the winners of which are competing at the Emirates Arena in Glasgow on the 9th March at the BBL Trophy Final which is being shown live on Sky Sports.