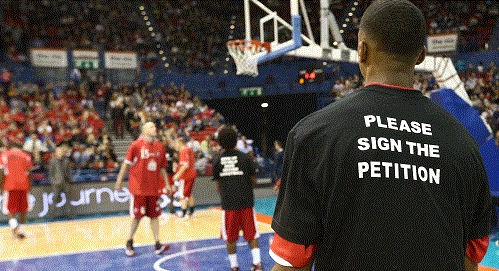 A grass roots campaign has been launched by members of the basketball community in the United Kingdom, urging UK Sport to reconsider their decision not to allocate funding to British basketball for the next Olympic cycle to 2016.

“For all this talk of legacy over the last 5 years, it seems like basketball is one of the sports that has been forgotten about,” said 26 year old Neter whose website receives over 80,000 visits a month, predominantly from the UK. “To cut basketball’s funding, a sport which has arguably shown greater progress than any other over the last four years, is a complete kick in the teeth.

“Their criteria for funding may be medal hopes only, but that is flawed when it compares all sports on an equal footing. If a sport only has say a few dozen countries in it, of course it’s going to be easier to win a medal. If it has multiple events and multiple distances the same would apply.”

Sports participated in by a tiny part of the population compared with basketball, such as rowing (£32.6m), sailing (£24.5m) taekwondo (£6.9m) and modern pentathlon (£6.9m), were rewarded with budget increases (1).

“The question has to be asked, as a nation, is all we care about medals, and the guesswork of a few about who might win in 4 or 8 years time, or do we want to provide hope and a future for sports that are actually played by the people.”

Basketball is the second most popular sport for 11-15 year olds in England, say the Department of Culture, Media and Sport (2), and according to Sport England, those participants are made up of 42% ethnic minorities (3); the clear leader of getting children from black and minority ethnic backgrounds active and the sport with the largest percentages from the most disadvantaged backgrounds (3).

The Fund British Basketball campaign also states the UK Sport’s “no compromise-formula” lacks consistency, with sports such as swimming still being funded to the tune of £21.4m (a reduction of only £3.7m) despite barely hitting half of their medal target, whilst others received funding increases in spite of winning no games at London, such as water polo, whose funding has increased for Rio to £4.5m.

Should the petition reach 100,000 signatures it will be considered for debate in the House of Commons.

The GB men rose from being unranked to being placed 23rd in the world rankings since their inception in 2007, whilst the women reached the number 24 spot. Most recently, at London 2012, the Men lost by a single point in the final seconds to silver medallists Spain, and the Women only in overtime to silver medallists France.

GB stars Pops Mensah-Bonsu and Drew Sullivan are both publicly backing the campaign.

“I am deeply saddened by the recent news of the funding cut,” said North Londoner Mensah-Bonsu who has forged himself a successful professional career in both the NBA and Europe.

“It hurts to think the last four years could have been for nothing, when we thought we were a part of something special that would inspire a generation.”

“Playing domestically, I know how badly the sport needs a Team GB to exist. Kids come up to me on a daily basis to say how much the Olympics meant to them, and players I coach have all hoped to be a part of the GB set up in the future,” said Leicester Riders captain Sullivan.

“I encourage everyone to make their opinion count by signing the petition and supporting the Fund British Basketball campaign.”