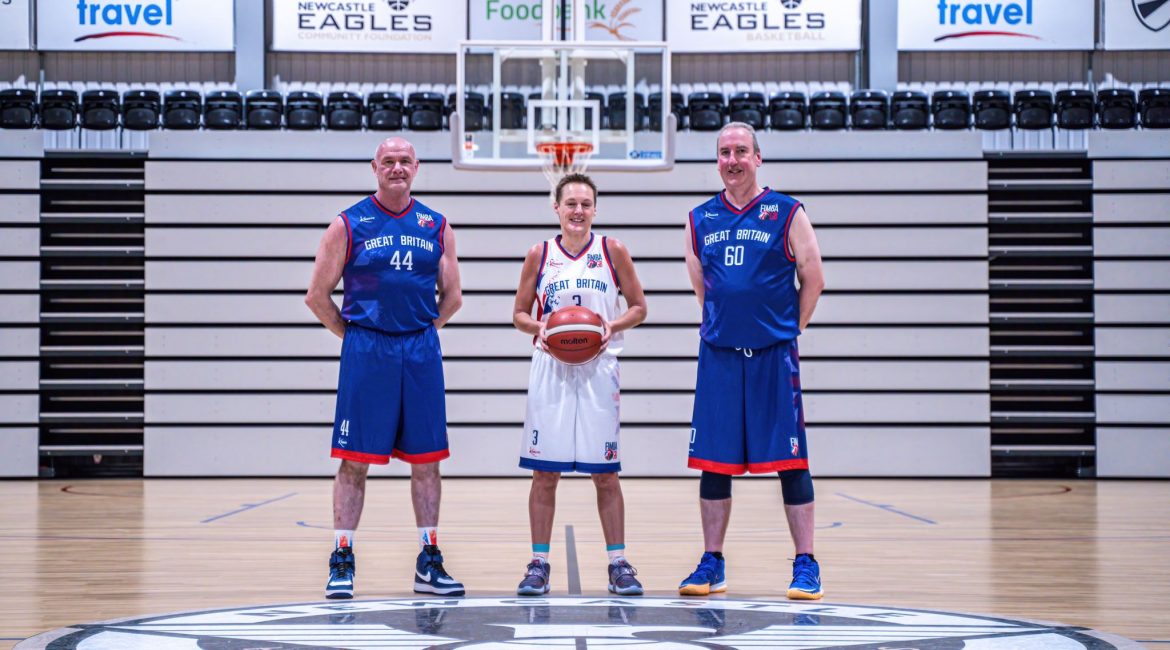 Three familiar faces from the Vertu Motors Arena will make their international debuts for Great Britain this weekend at the FIMBA Maxi Basketball European Championship in Malaga.

Keith White, Karen Eaketts and Peter Milne, members of the Bald Eagles over 35s basketball club that trains at our arena, will don their national team’s kit for the first time in competitive action over in Spain tomorrow.

“Although we have not played yet we are enjoying the great atmosphere here in Malaga”, said 62-year old Keith White from Washington.

“Most of the FIMBA GB teams are in the same hotel socialising and encouraging one another to do well.

The International Maxibasketball Federation (FIMBA) oversees tournaments for basketball players of 35 years old and over in age group categories divided by five years.

White started playing basketball aged 18 and played on the Newcastle team by 23 in national league, but never had the opportunity to represent his country on the international stage.

“I continued to play until I reached my early 50s and then retired”, added the FIMBA GB over-60s player.

“About three years ago, at the age of 59, I decided to return to the sport when a friend of mine had the idea of starting the Bald Eagles.

“I’m not going to lie, I found it very tough going initially, but with the help of some walking basketball sessions and a lot of determination, fitness levels started to rise, and my passion for the sport returned

“The goal was to send the team to the FIMBA European championships in Spain in 2020. I went along to the trials in Manchester and was successful in being selected for the team.

“Then the COVID pandemic put the championships on hold for two years, but I am so pleased they are finally going ahead now.

“We have scouted out our group stage opponents and are looking forward to getting on court.”

Karen Eaketts is representing GB in the over 55 women’s team and Peter Milne with the over 55 men.

“I played for the University of Warwick from 84 to 87 and then travelled the world for almost five years, managing to find pick up games here and there”, Eaketts

“In my forties I was playing national league for Newcastle and Sunderland as well as representing Northumbria Police in force tournaments and the Great Britain Police internationally.

“I’ve continued to play, now in the TyneMet and Durham Ladies leagues, so I’m proud to be representing North East women’s basketball in the FIMBA GB over 55 team.

Peter Milne started playing at 14 and made it into National Junior League competition within just two-years, becoming the top scorer in his final season.

“As a senior I played in the old Tyne and Wear League in the 80s and 90s. Starting in division two for Heathfield Cougars who went on to win league,” said well known Gateshead-based barber Milne.

“I played for many years in National League division one, top-scoring for the team and eventually winning the league in early 90s.

“I stopped playing in 1995 to get into competitive bodybuilding, but returned to basketball 5 years ago playing for Churchill Cobras in the TyneMet League and Bald Eagles.

“I want to say a huge thank you to all my customers, our friends and families who have supported all three of us, donated money to pay for our kit and wished us luck”.