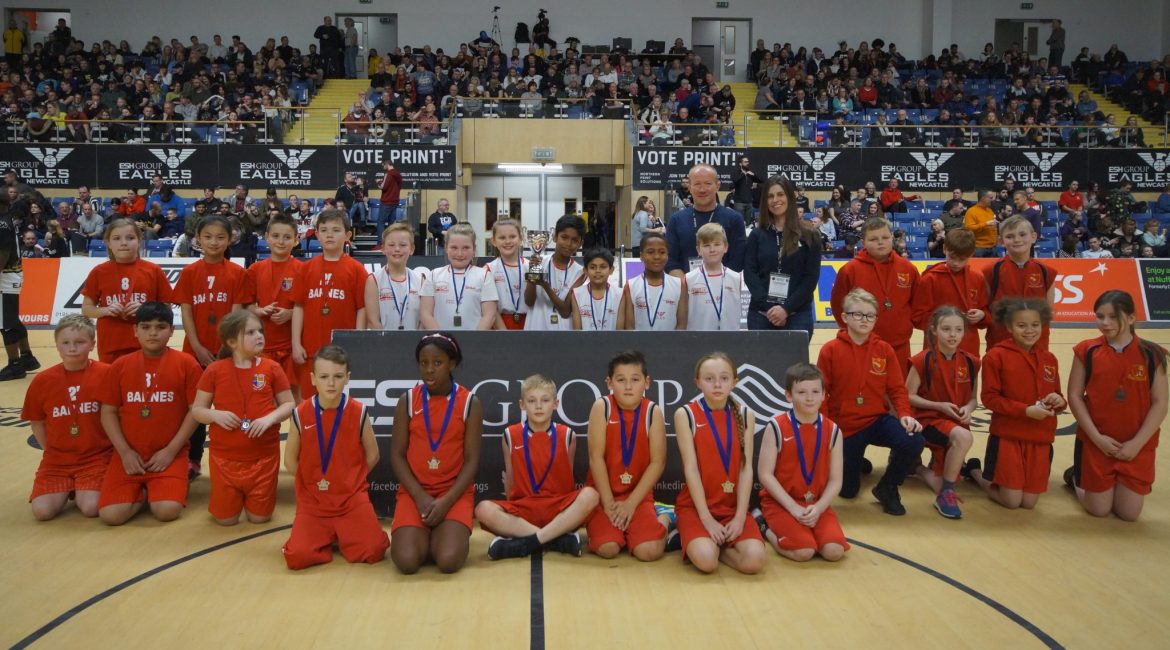 Sunderland primary school Hoops4Health finalists came to play prior to a Newcastle Eagles game with a guarantee that a new primary school would take the title as current holders Seaburn Dene failed to make it through. 2017 former semi finalists St. Cuthbert’s RC, Barnes Juniors and Farringdon returned with Richard Avenue being the newcomer to the event.

As expected at the semi-finals, there was little in the results between the schools. First to take to court were St. Cuthbert’s RC and Barnes Junior. With just under 2 minutes to go St. Cuthbert’s scored which turned out to be the one and only basket of the game sending them straight through to the finals. If that game was tight the next game proved even more so. Farringdon took an early lead in the 1st minute and with only 30 seconds left on the clock Richard Avenue were able to equalize forcing the game into a shoot out. 2 players were chosen from each team to take a shot and after 8 shots were taking the teams were still tied. With a golden basket rule brought in the tension built with Farringdon missing the basket and Richard Avenue capitalising on this scoring the next basket and securing the final spot place.

The final took place during the half-time with both teams providing end to end action but neither team were able to net a shot in regulation time. The teams took it in turn to do the shoot out and again continued to tie so that a golden basket would decide the fate of both teams. Richard Avenue stepped to the line sinking the shot which St. Cuthbert’s couldn’t match allowing Richard Avenue to hold the coveted title of Sunderland Hoops4Health winners 2018.

All four teams were brought onto court to be presented with the relevant medals with Richard Avenue lifting the cup. The presentations were made by John Davies, Chief Operating Officer Esh Group, Laura Devaney Head of Maintenance and Business Development Esh Group and Paul Blake, Managing Director of Newcastle Eagles. Richard Avenue will now progress to the Champion of Champions taking place in May.