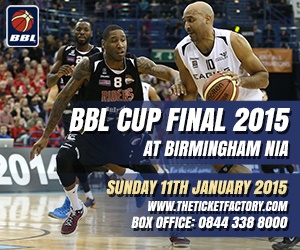 Have you ever wondered what’s it like to watch The Eagles away from home? Do you know what The OOTA is and do you want to be part of it? As a dedicated Eagles fan surely the answers to both questions are a resounding YES!

And after our superb semi-final win against Sheffield Sharks to qualify for our fourth consecutive BBL Cup Final now is your chance to show your support.

To be part of the OOTA (Oot Of Toon Army) and to Be Loud, Be Proud and Make Some Noise why don’t you get your tickets and transport to The BBL Cup Final at The NIA Birmingham on Sunday 11th January 2015.

And to ensure you’re part of the action and in the thick of it all soaking up and adding to the atmosphere you need to buy your tickets/transport direct from Esh Group Eagles Newcastle as soon as possible to guarantee the most atmospheric seats in the house.

Our opponents in The Final are our Arch-Rivals, The Glasgow Rocks who qualified after beating BBL New boys Bristol Flyers in their two-legged semi-final. Games against The Rocks are never less than intense and over the years we’ve seen some classic encounters.

The Main Event tips at 3.30pm but there is also a superb supporting cast for the day!  As a pre-cursor to the main event there is the Women’s British Basketball League (WBBL) Trophy Final (12pm).

The BBL Slam Dunk contest takes place at 2pm including appearances from some of the best dunkers in Europe. Throw in to the mix fabulous acrobatic dunkers, cheerleaders and a dunking mascot and you will have a day that will live in the memory for ever.

It’s a great day out supporting the sport and more importantly the Team you love. Fab and the guys are going for glory and want you all there to play your part and help us with your Fabulous support in The BBL’s first show-piece event of the 2014/15 season.

Tickets cost in the Eagles end cost £30 and £24 and transport via coach to and from The NIA, Birmingham will be £20.

Contact Kerry Nicholson at Esh Group Eagles Newcastle on 0191 2453880 or via e-mail at [email protected] for further details.