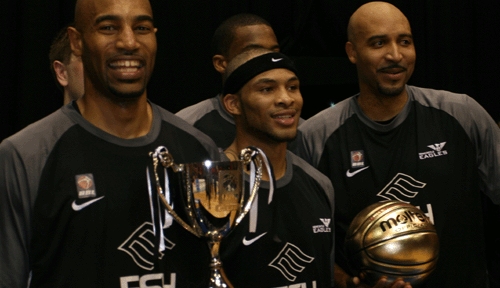 An astonishing record-breaking performance by “Prince” Charles Smith (pictured) and Newcastle Eagles lit up the National Indoor Arena in Birmingham as they were crowned 2012 BBL Cup winners.

The veteran forward was unstoppable as he poured in 39 points to put UCP Marjon Plymouth Raiders to the sword and help his team clinch a 115-94 success – the Eagles points total was also a BBL Cup record.

Having endured a painful period without silverware last season, the most successful team in BBL history added another trophy to their long list of accomplishments with the swashbuckling Smith supported well by BBL rookie Paul Gause who grabbed 24 points.

However this was a real team performance by the Eagles whose impressive defence took away some key threats with the likes of shooter James Jones very much blunted, much to the frustration of Raiders coach Gavin Love.

After a big dunk by Lehmon Colbert to level the scores at 14-14, there was little indication Smith was about to explode and take the game away from Raiders -even if he had made a bright start.

But, when he made his third triple of the quarter, completed an ‘and-1 play’ and came up with a huge defensive block shortly afterwards, it looked ominous for Raiders who were down by double digits at 30-20 after a dunk by Darius Defoe.

Smith continued torturing Raiders at every opportunity as he made yet another outside score and with livewire point guard Gause grabbing a score on the buzzer, Eagles were 35-20 in front after the first period.

Whatever Coach Love instructed his players to do defensively in respect of Smith clearly didn’t work when early in the second period, Smith picked up where he left off with another incredible ‘and-1’ play.

Joe Chapman then put the Eagles 44-24 ahead and it looked to be all over for Raiders who must have been having déjà vu about their trip to the NIA during 2009 when they were blown away by Mersey Tigers.

Thankfully for supporters decked in green, their team enjoyed a renaissance as they posted a terrific 18-5 run to reduce the deficit to single digits which was a huge morale boost.

But, the Eagles steadied things from the free-throw line and after ‘and-1’ plays by both Gause and Andrew Bridge, they re-established their stranglehold on the game at 63-46 heading to the locker rooms.

As hard as Raiders tried to eat into the arrears during the third quarter, they were still 17 points behind at the midway point and once Andy Thomson and Smith grabbed scores in transition, it looked a long way back.

Things went from bad to worse for Raiders when Paul Williams picked up his fourth foul and had to leave the game after incurring a technical foul for dissent.

It handed Smith the chance to make history and he took full advantage by sinking both free-throws to surpass the BBL Cup scoring record set by Steve Dagostino of One Health Sharks Sheffield in last year’s final.

With Chapman making an outrageously deep range three and Thomson throwing down a big dunk, the Raiders found themselves 94-74 behind entering the final quarter.

The excellent Gause nailed a three-pointer to take his team past the 103 mark which was the previous highest score recorded in the BBL Cup Final and it was little more than a procession afterwards as the Eagles players, coaches and fans got the party started early.

Lehmon Colbert and Jeremy Bell combined for 48 points for the losing team.