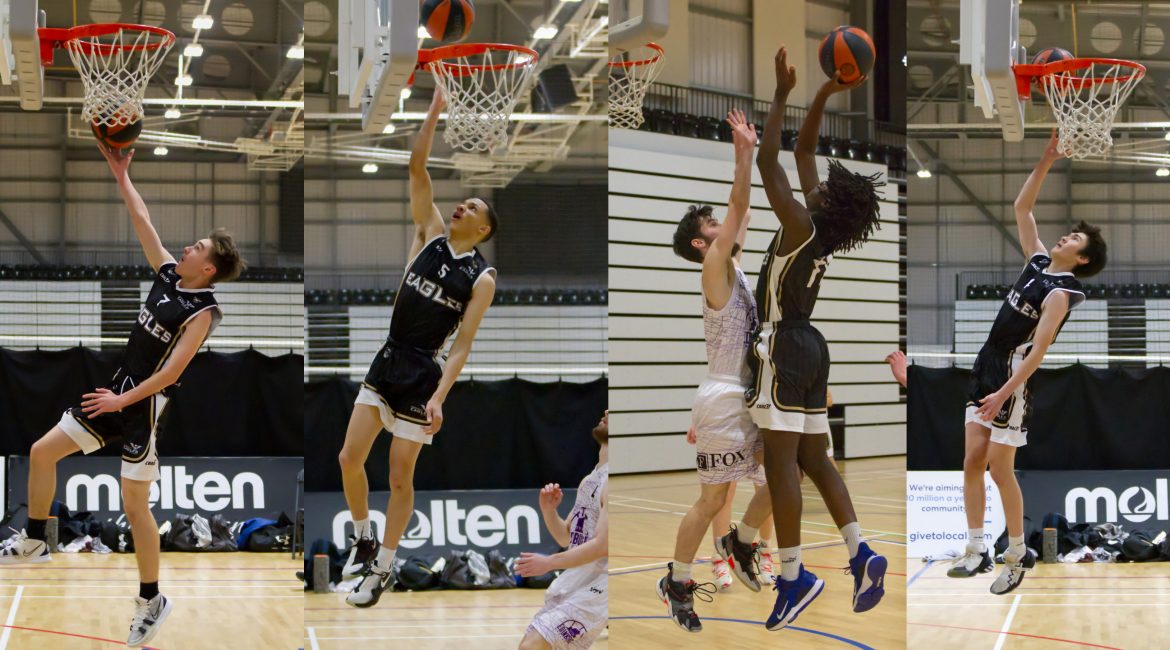 Ahead of this month’s hotly anticipated BBL clash at the Morningside Arena, Newcastle Eagles Under 14 boys took on the Riders in Leicester.

And the Academy’s rising stars pointed the way for Ian Macleod’s men with a thumping 62-41 road win.

Leicester made the early running to bag two early baskets but it wasn’t long before the boys in black hit their stride.

And once Jakub Bobkowski, George Merrifield and Tom Beall found their range, a combination of free-flowing offence and defensive intensity saw Newcastle open up a 22-12 first quarter lead.

Luke Tucker made his presence felt at both ends of the court as the second period got underway.

And it was Tucker and Leo Degnen-Potter who locked down the Leicester offence — restricting the hosts to just three scores all quarter.

Aston Hall and Leo Glaholm ensured the Eagles continued to stuff the stat sheet and the Tynesiders took a 19-point lead into the locker room at the half.

Degnen-Potter opened the scoring after the restart before team-mates Hall, Merrifield, Tucker and Ben Lumley piled on the pressure.

And the hapless Riders had no answer to Newcastle’s intent and focus at both ends of the court.

A late Leicester comeback was too little, too late and Manchester Magic will need to be at the top of their game when they visit the Vertu Motors Arena on December 12.

Newcastle Eagles Under 16 boys cruised through their cross-border clash with Edinburgh to clinch an impressive 91-52 homecourt win.

The Vertu Motors Arena bore witness to one of the most comprehensive victories of the season as another stunning display of total team basketball stifled the Scots.

And Newcastle’s range of scorers proved too hot to handle as every player contributed to an eye-catching final score.

The Eagles converted from the tip as in-form Ollie Finlay found Pedro Omere under the basket with an arrowing pass from halfway.

And from then on it was plain sailing for the powerful hosts as Joe Corkin (9), Omere (8), Farrell Kepngang (5) and Emmanuel Hezekiel (2) helped establish a 27-11 first quarter lead.

Ruben Hezekiel added two quick scores as Newcastle picked up where they left off with a lightning start to the second period.

And there were more new names on the scoresheet as Akeem Johnson, Jesse Osarenkhoe, Tobi Dawson and George Stephenson combined to open up a 46-25 lead at the half.

Edinburgh shored up their defence after the break but Marcus Gnezere made his presence felt in the paint to keep the scoreboard ticking over.

Johnson, back in homecourt action after a spell on the sidelines, lit up the VMA with seven fourth period points.

And Dawson and Stephenson forced a series of Edinburgh turnovers as the hosts refused to let their energy levels dip down the stretch.

Head coach Marc Steutel, fresh from guiding Great Britain to a 1-1 start to their World Cup qualifying campaign, anchored the disciplined visitors to a deserved victory.

And Newcastle will look back on the concession of 31 fouls — resulting in 17 Lions’ trips to the bonus stripe — as a contributory factor to a disappointing defeat.

But the Eagles upped the intensity in the second quarter to take a 42-38 lead into half-time.

The Lions roared back after the break to seal a one-sided period 22-11 and Kande’s eight points down the stretch couldn’t offset a tough derby loss.