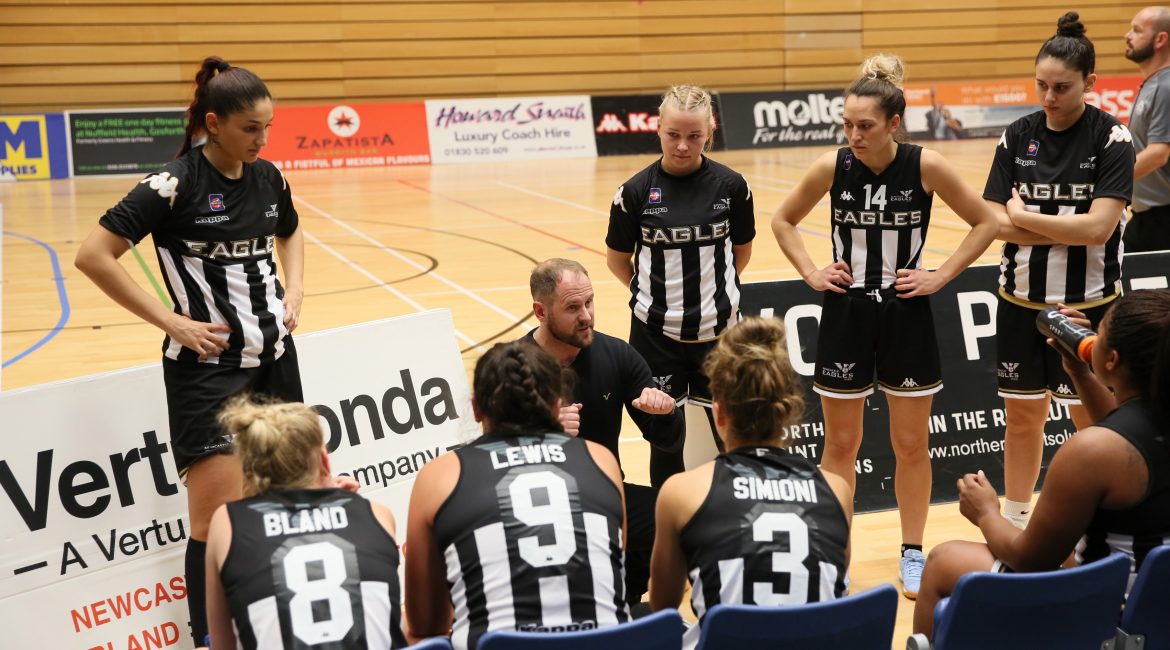 Chris Bunten has given his squad a clean bill of health as Newcastle Eagles’ WBBL campaign resumes with a vengeance this weekend.

Almost a month without top flight action has interrupted a solid start to a landmark season.

“It’s going to take a lot out of the players and we’ll have to be very careful about how we manage court time next month,” said Bunten.

“Fortunately the international players have returned relatively unscathed and Kara [Bonenberger] is fit to play some part this weekend.

“We know we’re in for a tough game at Sevenoaks and we know a few of their players very well.

“But we’re determined to make the most of our trip down there. We’ll be throwing a lot of different things at the players this week and our primary aim is to come away in a stronger position ahead of our rematch with the Suns in the cup.”

Newcastle and Sevenoaks know their semi-final opponents after the draw for the WBBL Cup final fours was made earlier this week.

Leicester Riders lie in wait for the winners of next month’s quarter-final tie but Bunten can’t look too far ahead with this weekend’s championship double header looming large.

The Eagles tackle Essex less than 24 hours after their trip to Sevenoaks and squad rotation will be key.

“Giulia Simioni has come back from the Swiss camp nursing a slight foot injury but it’s nothing to worry about and she’ll be key to our team as usual,” added Bunten.

“Keziah Lewis returned from the Polynesian Cup as MVP and she’s had a fantastic experience with her sister playing for the Cook Islands out there.

“Both Kez and Adoniah were among the tournament’s top scorers and that has to be positive for our squad.

“It’s great to see these players flying the flag for Newcastle Eagles and the WBBL all over the world but I’m glad to have them back in the North East safe and sound!”

Bonenberger is expected to get limited minutes on her return to action but Bunten added: “It’s not a position I’m too worried about.

“Georgia Ohrdorf is having a superb season and Maya Price has been brilliant. Both of them can play more minutes and allow us to ease Kara back into the action.”

Newcastle face Sevenoaks at 6pm on Saturday before tackling Essex Rebels on Sunday from 4:30pm.