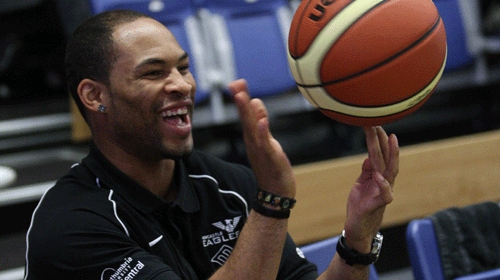 The BBL Team of the Week has three players who will be competing in this weekend’s BBL Cup Final, two of which are Newcastle Eagles players.

Paul Gause (Newcastle Eagles)
After spending some time injured on the sidelines during December, livewire point guard Paul Gause is beginning to get into the groove during his first season in the BBL. He was impressive in the Eagles’ first win of the weekend against Glasgow Rocks but it was his contribution in helping complete a win double with victory at Prestige Homes MK Lions which really stood out. Gause posted an efficient all-round performance harvesting 18 points including four of five inside the arc and two of three from outside. In addition to five assists, it was his work in helping the team out on the glass which really made a difference. In fact, he just missed out on a double-double after pulling down nine rebounds in the win.

Nate Reinking (One Health Sharks Sheffield)
The Great Britain guard helped One Health Sharks Sheffield open up the new calendar year with a win after a typically strong shooting display by Reinking shot down Cheshire Jets. He claimed a second BBL Team Of The Week appearance after accumulating 25 points which included four trademark triples from just six attempts. Reinking also came up with five assists and five rebounds as the Sharks look to ignite their season and start climbing the table after a disappointing first half of the campaign in the BBL Championship.

Tayo Ogedegebe (Guildford Heat)
After fourteen weeks without a representative in the BBL Team Of The Week, Tayo Ogedegbe becomes the first player from Guildford Heat to make the line-up. It was a great time to produce a big performance since his contribution was absolutely vital in securing a priceless road win at fellow strugglers Cheshire Jets. He racked up a huge 32 points and it could have been even better had he not missed six foul shots. But, he certainly made up for that indiscretion by also weighing in with eight rebounds and two assists. However it wasn’t just offensively where he made a big impact but also at the defensive end where he came up with a superb five steals – absolutely vital in any game but particularly one which was so close it needed overtime to find a winner.

Lehmon Colbert (UCP Marjon Plymouth Raiders)
The forward sent out a warning that he will take some stopping at the National Indoor Arena in Birmingham this weekend when his team face Newcastle Eagles in the BBL Cup Final. Colbert was on song once again with an excellent double-double in the win against Mersey Tigers at the Pavilions. He achieved a double-double of 21 points and 11 rebounds and managed to convert a fantastic ten of his eleven field goal attempts inside. With four assists, two steals and not a single turnover to his name, it’s not surprising his performance was the best of the week in the BBL as he registered a performance valuation of 31.

Darius Defoe (Newcastle Eagles)
One man who will play his part in trying to stop Colbert during the BBL Cup Final is Darius Defoe and he showed Raiders they also have work to do with an excellent display as Eagles destroyed fierce rivals Glasgow Rocks. He racked up a near double-double of 21 points and nine rebounds but also showed great anticipation and reactions defensively to secure four steals as the Eagles continue their assault on silverware in every BBL competition. Defoe just pipped Eagles team-mate Charles Smith to a place in the starting five this week.