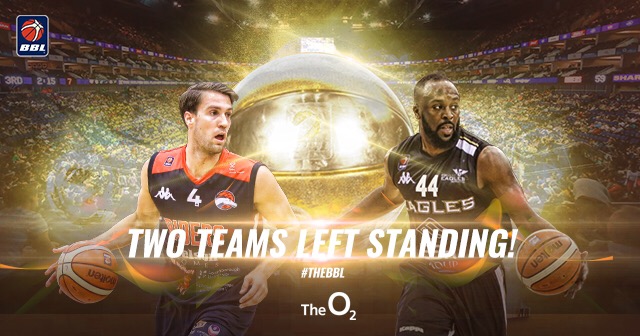 This Sunday afternoon the top two teams in the 2016-17 BBL Championship will face each other in the 2017 Play-Off Final.

A potentially record breaking crowd is expected on Sunday at The O2 in London to see the last silverware of the season handed out.

BBL Champions and Trophy winners Leicester Riders make a return to the capital after featuring in last year’s edition when they were edged out by DBL Sharks Sheffield.

Having comfortably cruised past London Lions in both legs of the Semi-Finals, the Ed Percival Molten BBL Coach of the Year Rob Paternostro will take his side up against familiar rivals in the shape of the 2017 BBL Cup winners and league runners-up, our Esh Group Eagles Newcastle.

Our Eagles had to fight off Worcester Wolves in an epic Semi-Finals series to make it to The O2, where we won the Play-Off title just two years ago and head coach Fab Flournoy MBE will be looking to add to the longest honours list in BBL history.

With MVP candidates such as Taylor King and Rahmon Fletcher on show for each team, it promises to be exhilarating as the top two teams in the country go head-to-head.

Meanwhile history will be made in the WBBL Play-Off Final as Nottingham Wildcats or Sevenoaks Suns look to take the coveted prize for the first time. WBBL Champions Wildcats will be the favourites behind the outstanding Ashley Harris and influential Siobhan Prior.

However, with the superb Cat Carr and WBBL Trophy MVP Anne Pedersen, Suns will be hoping they can shine on their first appearance at the event and wrap up the most successful season in their history.

ALSO FEATURED ON THE DAY

Purchase tickets for the seating section behind our Eagles bench and join our fans on the supporters club coaches heading to London this Sunday via our website tickets section or by calling 01912453880.

The supporters coach leaves Newcastle at 5am prompt – contact the office on 01912453880 for more details.