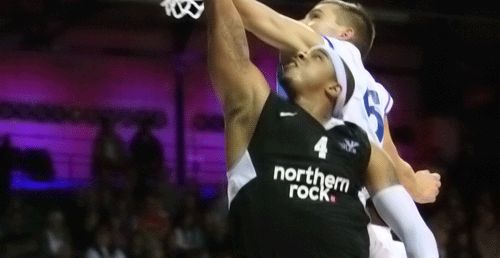 Newcastle Eagles moved back to the top of the BBL with a comfortable 107-82 victory over Jelson Homes DMU Leicester Riders.

The Eagles were unstoppable from the three point line as they went a combined 15 of 29. Joe Chapman (pictured) and Andrew Bridge were the main threats as they notched 6 from 8 and 4 from 5 respectively.

Eagles were in sensational form in the first quarter with the team making 7 of 12 from beyond the arc. Bridge made 3 of 4 and Joe Chapman landed both of his to complement perfect shooting from Darius Defoe as Newcastle led 35-12. Riders had the better of the opening exchanges in the second quarter with Jason Johnson making it 42-30 from the line. Eagles response was swift with Charles Smith’s three making it 54-32 as the half ended 56-34 to Newcastle.

A Chapman free throw moved the lead to 30 (80-50) late in the third period. Fab Flournoy was able to run his bench and Jamie Glen made it 84-52 to end the quarter.

Eagles lead peaked at 101-66 midway through the final stanza as the reigning champions replaced Sheffield Sharks at the summit of the BBL. Leicester remain fourth.