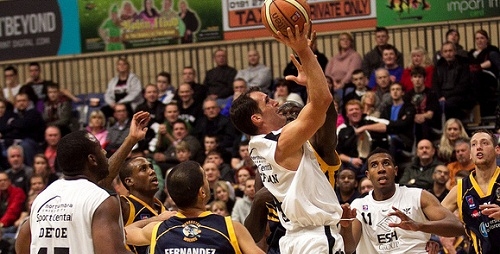 A trio of debutantes and Newcastle Eagles’ players dominate our line-up this week.

It’s a long overdue debut for the Eagles’ playmaker who has been excellent ever since he arrived on Tyneside during the summer. He has fitted seamlessly into the team and has been instrumental in helping the Eagles string together some excellent early season form, which has delivered only a solitary defeat. Huffman was on absolute fire from downtown against Worcester Wolves, sinking a magnificent seven of ten triples to book his side a spot in the semi-finals of the BBL Cup. Finishing with 25 points and five assists, it was the joint-best performance of the weekend and the perfect way to mark his first appearance in the BBL Team Of The Week.

It’s an all-Eagles backcourt this week since ‘Mighty’ Joe Chapman registers a second appearance of the season in our starting five having last featured during Week 4. He also had the hot-hand from long-range as the Eagles destroyed Worcester with a three-point shooting master-class. The guard finished with 23 points after draining a devastating six triples from just nine attempts. He also completed an excellent line in an all-action display with a super seven assists, five rebounds and three steals.

The Great Britain and Riders’ star finally makes the BBL Team Of The Week after leading his unbeaten team in fine fashion ever since the start of the season. Whilst a number of his team-mates have grabbed the limelight, Sullivan now gets his share too after guiding Riders past London Lions and into the last four of the BBL Cup. The forward had a majestic night on his return to his hometown, lighting up the National Sports Centre in Crystal Palace with a fine double-double of 16 points and 11 rebounds whilst also dishing up an excellent seven assists.

The Eagles forward was doing the business at both ends of the floor in fine style last Friday night at Sport Central. He posted the joint-best performance of the weekend with his team-mate Damon Huffman. He makes the BBL Team Of The Week for the second time this season after producing a fine double-double of 19 points and 10 rebounds, although it was his defensive work which really stood out. He mustered a brilliant five steals as well as a block to help shut out the Wolves and send them packing.

It’s been a turbulent time for fans of Cheshire basketball of late, but Alif Bland did his utmost to ease those worries with a fantastic performance in the north-west derby against Mersey Tigers. He gave the crowd at Northgate Arena something to cheer after grabbing a double-double in rebounds and points. He scored 17 and then added 11 boards to grab his first ever BBL Team Of The Week appearance, helped also by his outstanding defensive work which resulted in an impressive three blocks and two steals.