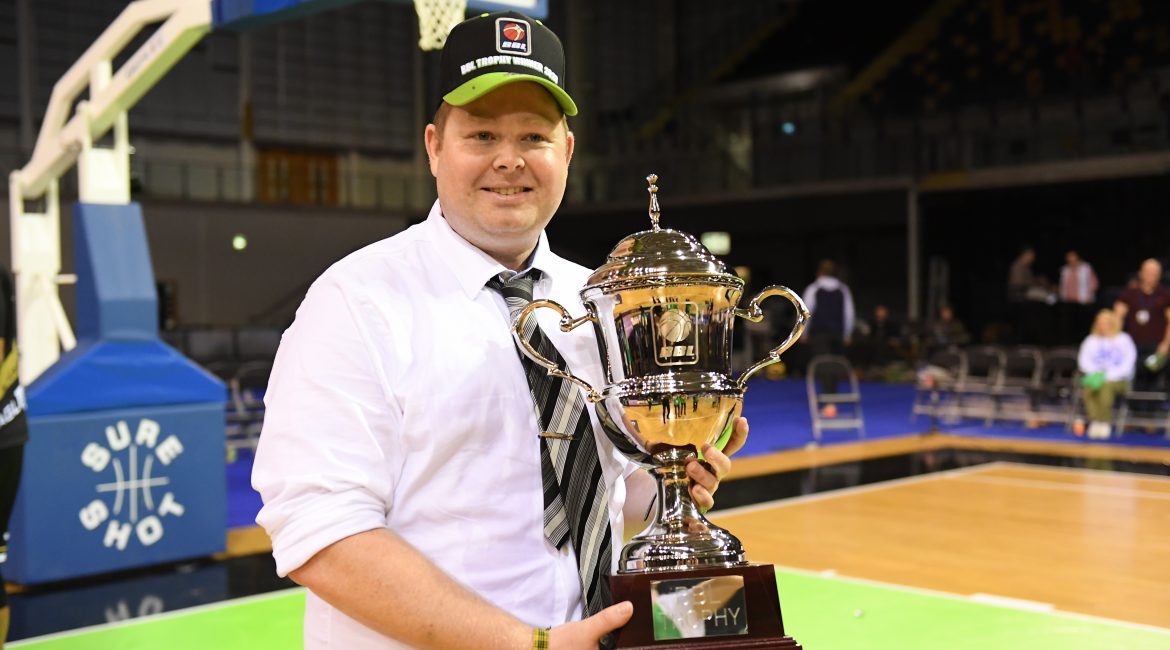 As things start happening around the BBL and as our fans start wondering what might be happening here in Newcastle we through it might be worthwhile catching-up with our head coach Ian Macleod.

We started by asking about lockdown and “Clan MacLeod’s” reaction to it.

“As with most people, initially it was very difficult to adjust. Going from being immersed in the team in mid-season, to dropping everything was surreal and quite a shock to the system.

“The silver lining was more time with the family and seeing a lot of my wife and son, Xander turned one a couple weeks ago.”

Ian has been busy and involved in a lot of virtual coaching and discussions about coaching since Lockdown.

“The world has discovered ‘Zoom’. Personal development and idea sharing are something I do a lot of and work a lot with a group of like-minded coaches involving calls, projects, and talk-ins.

“I’ve also delivered a few of my own seminars and calls to talk about various topics from team defence to my own journey.”

On to the questions on all our minds right now, starting with his professional opinion from within the sport on the Government’s decision not to support the £1m claim for British basketball:

“I’m not sure of their reasoning behind it, and I know people point to the funding given to Rugby league as a precedent, but as RL are hosting a world cup in this country it is clear that they are protecting their investment.

“We also see now that the arts and culture section has had a huge cash injection. It is not surprising but it is disappointing, we haven’t quite figured out how to properly fund sport in this country and in particular team sport.

“We need to stop constantly looking to the horizon for the big funding package or the rich TV deal that will be our saviour and ensure we are self-sustainable in how we operate and we are making the most of all the opportunities we currently have. However small they may be.”

London Lions decision to go for the Champions League:

“Love it! They have the backing it seems, and they have the ambition. It is great for the BBL to have a team in the BCL and we should throw our support behind them.

“Who knows what their venue plans are moving forward but coupled with building of facilities, European competition is on everyone’s wish list.”

The situation at Glasgow Rocks with their departures:

“It seems unclear what the future holds for a franchise of rich tradition. What we do know is that Vincent is gone and three guys have gone with him.

“There is uncertainty around the whole sport in the current environment and hopefully the Rocks will come out the other side a stronger and more stable franchise.”

“Firstly, they’ve had a great innings! Three special players and good people as well. Energetic youth vs experienced heads are always a hot debate and a difficult blend to get right, I expect the Giants to honour them appropriately after such long serving dedication to the club.”

The return of Mike Tuck to Sheffield and the release of Josh Wilcher from Plymouth:

“Mike Tuck is part of the furniture in the BBL and at Sheffield. One of the most ‘nailed-on’ signings each year. A veteran pro who has a knack of hitting the big shot.

“Sheffield had a solid year and I’m sure there are a lot of players such as Tuck who feel they didn’t get a fair crack at last season with things being cut short by COVID-19 and being denied a playoff run.”

“Josh moving on was a surprise, but I think the Plymouth we have become accustomed to might transform massively this season.

“Backed by new investors I think they will be looking to invest heavily in the playing squad and with that comes the adjustment or indeed ending of previous roles. I think there will be a lot new faces when they take to the court for the start of the 20-21 season.

“Josh is a great pro and someone who has worked hard to forge a career in the BBL, it wouldn’t surprise me at all if Josh signed on for another BBL team, maybe just up the M5…”

“I was surprised when Connor went to play in German Pro B last year. He performed as expected and was a top end player in that league.

“He has the capability to play in good leagues around Europe to see him in the 3rd tier of German basketball was a bit of a surprise.

“I expect him to come back to the BBL hungry to perform and I predict he will have a bigger role with the team than in previous seasons.

“He is a player I have a lot of respect for due to his work ethic and energy, one of the best defensive players in the league I feel.”

“Rodney leaving was disappointing for everyone. We waited a long time to get everything in place for Rod to have a long stay in Newcastle.

“The uncertain times, I’m sure, played a part in him taking the decision to sign in Iceland but certainly only seven games in an Eagles vest was not how we envisaged things.

“I wish him well in Iceland, it is a league I think he will do very well in.”

Recruitment for next season owing to the uncertainty:

“Recruitment has been a little more complicated this year, with everyone asking the same question… when will we start?

“There is a lot of discussion, an insane amount of emailing back and forth but once countries and leagues around Europe start getting some clarity on how things will move forward, I expect things to happen quickly.

“I think some teams will wait very late before finalising signings, and while this might be frustrating for fans it is important that teams do not overextend themselves too early.

“I believe the format of the cup being played early will remain in some form, and I foresee at least some teams not completing their roster until the latter stages or indeed until the league is ready to commence.”

Plans for progression and how hard it is too plan given the circumstances:

“The BBL announced the Play-Offs Final date for next year, and also that they expect an Autumn start ‘as usual’.

“We are working towards this until we are told differently, but with recent announcements of an October return for crowds we are encouraged. It is important that we continue to move forward with building all aspects of the club this season.

“I have a desire to evolve and grow not only the players on the court but also coaching staff, support staff, feeder teams and other processes and aspects of what we do.

“It is important we use the time we have been afforded to identify the ways in which we can improve as a club not just a team.”

As ever honest, open, and thoughtful responses from Coach MacLeod and a lot of maturity and understanding in his words.

There’s no doubting that he understands the current situation and how tough it is for everyone and that when the call comes, he’s going to be ready to hit the ground running.