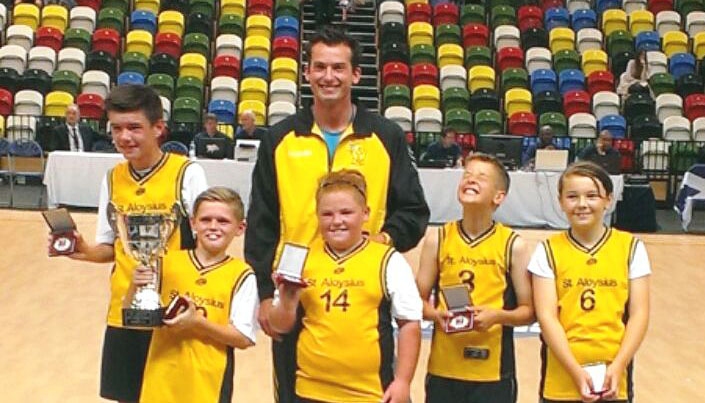 St Aloysius did not falter under the pressure. While Scotland jumped out in front first and held the edge at half time 6 – 4 it was against the run of play as St Aloysius had trouble finding the basket with several shots missing. The English Champions also had a basket disallowed. However, in the second half the northeast team smothered the Scottish team with their defense while managing to level the score at 6 all. Feeling confident from controlling the play the South Tyneside schools scored in overtime winning 8 – 6.

“I’m bursting with pride, just so proud of the children – what an achievement to now not only be English Champions, but British Champions too. Wonderful, will be hard to surpass, but will be determined as ever to be successful once again next season. We’ve worked so hard together for this and it is well deserved – such talented, dedicated and true sportspeople, together we have been formidable this year” teacher Adam Rogers added.

The school was represented by Dylan Rutherford who top scored for the team with 3 baskets, Kai Charlton who added the other basket, Captain Liam Murray , Ilana Wood and Katie Scammell.

St Aloysius won the Newcastle Eagles Hoops4Health South Tyneside Tournament in April earning their spot in the Champion of Champions competition which sees all local authority winners square off. This takes place prior to and at half time of a Newcastle Eagles game. St Aloysius topped Barley Mow to take the Newcastle Eagles overall crown and progress to the National Finals. There was no stopping the Northeast team as they took the crown at Wembley and have now been crowned Great Britain Champions. “The support of the parents, Mrs Soulsby and Dominic Soulsby support in supporting and assisting has been so appreciated and what we achieved would not have been possible without this support” Rogers stated.

“The Newcastle Eagles family is absolutely thrilled for St Aloysius and what they have achieved by bringing another basketball trophy to the Northeast. Hoops4Health is a healthy living programme using basketball as an activity to convey a range of positive health messages to young people in primary schools, whilst also providing them with the skills and relevant outlets to continue playing basketball. It is not only a core programme of the Newcastle Eagles but is delivered nationwide to have a northeast school be crowned Great Britain Champions is amazing” Paul Blake Newcastle Eagles Managing Director commented.

The Newcastle Eagles and Eagles Community Foundation will be celebrating the success of St Aloysius RC Primary at the Eagles first game on the 27th September vs. Durham Wildcats tip off 7.30pm at University of Northumbria Sport Central.