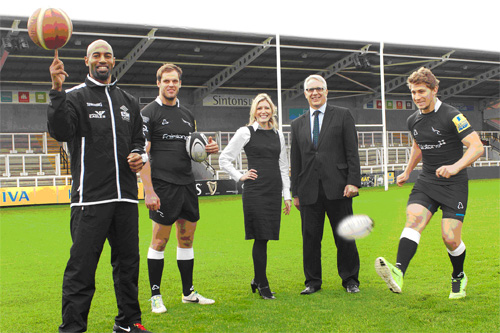 Two of the region’s top-flight sports teams – along with three of their star players – are being sponsored by law firm Sintons.

Newcastle Falcons and Esh Group Eagles Newcastle are both supported this season by Sintons, in what is the continuation of a long-standing relationship with the Aviva Premiership rugby club, but a newly-formed association with the BBL basketball team.

Newcastle-based Sintons is also lending its support to Falcons captain Will Welch – who recently made his 100th Falcons appearance, and has been sponsored by Sintons since he was an Academy player – as well as Fabulous Flournoy, player and head coach at the Eagles. The law firm is also sponsoring 19-year-old Sean Brown, part of the Falcons Academy, who has recently made his first-team debut and is being tipped for the top.

The sports division at Sintons, led by Associate and specialist sports lawyer Iona Sims, is highly regarded throughout the region and beyond for its work with clubs and individuals of all levels, from grassroots to high-profile professionals.

Alan Dawson, Chairman of Sintons, said the firm is proud of its dedication to sport.

“The North East is a region renowned for its love of sport, and that is something we share at Sintons. I have always played and coached rugby, and now referee for my local club, Morpeth RFC, and my daughter Kayleigh has just retired from the Great Britain swimming team, so sport is something I am hugely passionate about.

“At Sintons, we are specialist legal advisors to clubs and sporting individuals of all levels, but we are also committed to giving our support in other ways. We are delighted to extend our long-term relationship with the Newcastle Falcons and Will Welch, as well as beginning our support of Sean, Fabulous and the whole Eagles set-up.

“We wish them all the best of luck for the season ahead and look forward to supporting and working with them for many seasons to come.”