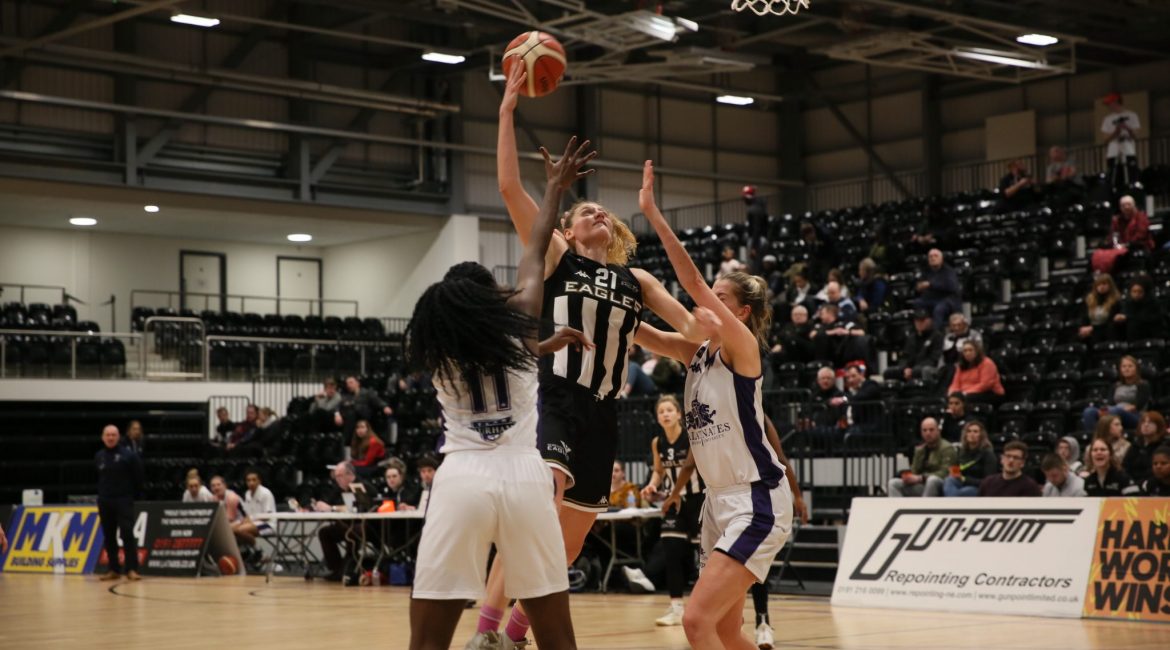 A third quarter no-show sowed the seeds for a shock defeat as Newcastle ceded the local bragging rights to a ruthless Durham Palatinates.

The visitors arrived on Tyneside second-bottom of the WBBL and with just three league wins to their name.

But Lee Davie’s side won a decisive third quarter 27-9 and resisted a late home charge to seal a famous derby victory.

And Chris Bunten must go back to the drawing board ahead of Saturday’s clash at Caledonia Pride as his team goes in search of a Trophy pick-me-up north of the border.

Newcastle’s frustrated coach was forced to omit Georgia Ohrdorf against the Palatinates after closely monitoring the previously concussed Australian in training this week.

But there was better news for the black and whites in the shape of returning stars Rachael Bland, Adoniah Lewis and Gerda Morkunaite.

And all three tasted first half action against a Durham side that set out determined to spoil the party as WBBL hoops arrived at the Eagles Community Arena.

The visitors thrust returning playmaker Theairra Taylor into the starting five and the experienced American was keen to get her hands on the ball from the tip.

And Taylor sloped into the locker room at the half disappointed with a return of none from five from the field – albeit contributing five steals and two assists to the Palatinates’ cause.

The Eagles took a 36-35 lead into the break on the back of yet another trademark double double from the irrepressible Kara Bonenberger.

Newcastle’s talismanic forward sank the opening five points of the game – and her side’s first at their new home – before setting out to deliver a first half masterclass in total basketball.

Bonenberg’s eight defensive boards in the opening 20 minutes ensured Durham were never in a position to open up a serious advantage.

And the hosts badly needed their American enforcer to be at her feisty best as they shot a paltry 37 per cent from the field.

Given greater accuracy on offence the pre-match favourites would surely have taken a comfortable lead into the third period.

But on a night when neither team was coming to terms with two cold hoops, the race to get hot in the paint was yet to warm up.

Disappointingly for Bunten it was the Palatinates who finally found their range after the restart – a 10-0 tear to open the third quarter asking serious questions of the flat-footed Eagles.

His team leading 45-36, two and a half minutes into the second half, it was no surprise to see a broad smile breaking across the face of a previously pensive Davie.

And the Palatinates’ playcaller must have believed his Durham stars had laid the foundation for a rare road win following a lightning restart.

Newcastle’s situation worsened when Bonenberger hobbled off court to receive treatment on an injured left foot.

And Durham capitalised on an unexpected bonus to extend their lead to 17 with 10 minutes on the clock – outscoring their opponents three to one during a powerful quarter of WBBL basketball.

Palatinates skipper Monik Bosili led all scorers with 21 and the impressive Harriet Ottewill-Soulsby took a double double of 16 points and 10 rebounds into the fourth period.

Bonenberger returned as Bunten took one final throw of the dice in a late bid to get his team back on terms.

But even the Eagles’ leading scorer couldn’t arrest an alarming slump as the hosts’ offence continued to misfire.

And Durham fully deserved their eye-catching scalp on a night when very little went right for a non-plussed Newcastle.