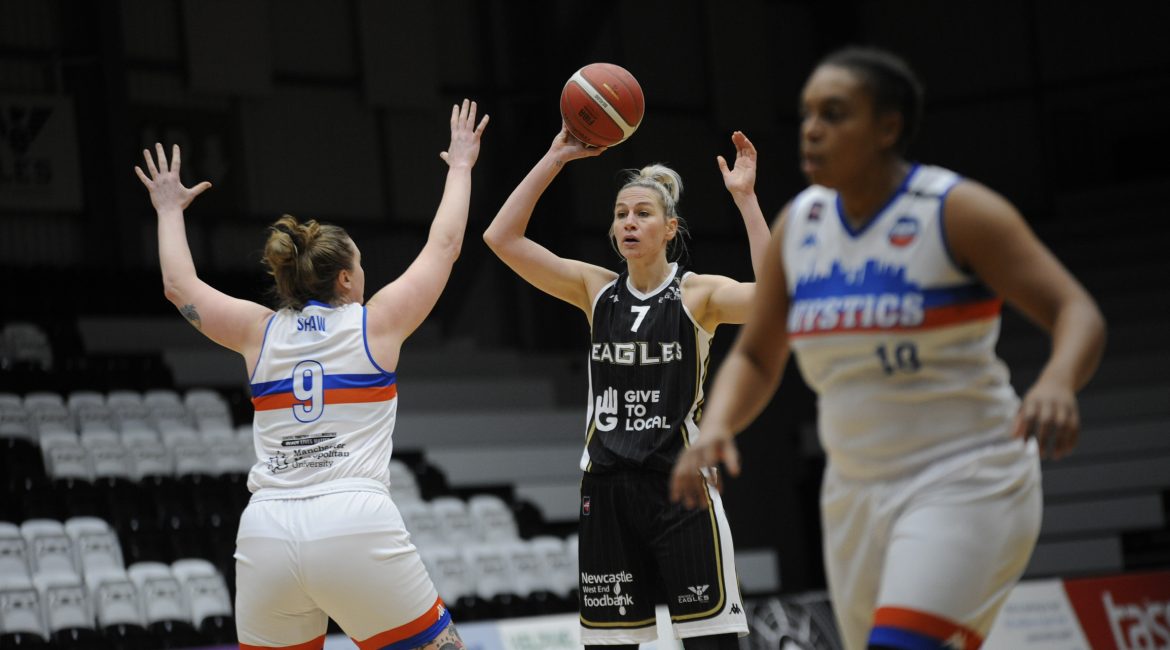 On February 16 a Giulia Simioni three-pointer set the seal on a comfortable win for Newcastle Eagles WBBL against London Lions in a one-sided championship clash.

Who knew it would be another nine months until elite women’s basketball would return to Tyneside?

During that time the very future of Newcastle’s WBBL team was in doubt and much has changed since last winter.

Little wonder that 280 days since Newcastle last took to the floor at the Eagles Community Arena, the hosts were keen to make up for lost time.

And following a disappointing defeat at Nottingham earlier this month Chris Bunten’s side had a point to prove.

The return of key duo Mante Kvederaviciute and Lisa Koop added much-needed height to a side eventually out-muscled in the paint against the Wildcats.

But an added bonus was the absence of Mystics’ Dominique Allen — Fabulous Flournoy’s god-daughter sidelined prior to tip.

That left another former Team Northumbria forward, Hannah Shaw, to provide much of Manchester’s height and muscle inside.

And it always looked like a tall order for the veteran GB international against a Newcastle side boosted by additional inches and extra pace.

Nevertheless, this was no easy assignment inside a tense ECA.

A see-saw start saw both teams trade baskets and a Rheanne Bailey triple tied the scores at 8-8.

Mystics’ Sophia Song was calling the tune for the lively visitors but Eagles’ guard Ali Gorrell was already beginning to boss the backcourt.

And Newcastle’s returning guard was at the heart of the 6-0 tear that finally put some daylight between the two North Group rivals.

Manchester clawed their way back into the tie to level the scores at 15-15 but the Eagles led 21-16 after the first quarter with Bunten already able to dip into a deep bench.

If all eyes were on senior international duo Kvederaviciute and Koop then it was co-captain Rachael Bland who once again set the early standard.

It was the local favourite’s arcing three that fired Newcastle 39-26 ahead four minutes out from the half.

And in 16 first half minutes Bland added four assists and a block to her six rebounds in a typically all-action display.

In truth the Eagles should have been out of danger and out of sight after the opening 20 minutes but Manchester showed remarkable resolve to stay in touch.

An 8-0 run to close the half infuriated Bunten as Newcastle’s lead was trimmed to single digits.

But on a brighter note busy BBL rookie Maddy McVicar had maintained her fabulous start to life in an Eagles vest with 13 first half points — including three from four from three-point range — and four big boards.

Kvederaviciute and Koop had combined for 14 points and 11 rebounds before the break as two of the league’s star attractions felt their way back into competitive action.

And it was the latter who finally halted a stunning 17-0 Mystics tear either side of the half with a much-needed lay-up under pressure.

Bunten was justifiably furious that his star-studded roster had taken its foot off the pedal and allowed Jeff Jones’ side back into the game.

But Newcastle had been well and truly rattled by a well drilled and well-disciplined Manchester side and eight quick points from the dangerous Song drew the visitors level at 58 apiece with 10 minutes on the clock.

Mystics’ prolific guard led all scorers with 22 after three quarters of a fascinating clash and the psychology major hit a fifth triple of the night to fire her side 61-58 ahead.

It was now or never for the seriously undercooked Eagles with Bunten’s quarter break blast still ringing in their ears.

And Gorrell — equally vocal in her assessment of a sloppy third period — sought to lead from the front with the pressure mounting.

Seven straight points from the steely guard opened up an eight-point Newcastle lead and despite more late pressure from the impressive Mystics there was no way back for Jones’ gutsy roster.

Gorrell finished on 25 personal with McVicar and Koop adding double doubles ahead of next Sunday’s clash with Leicester Riders.