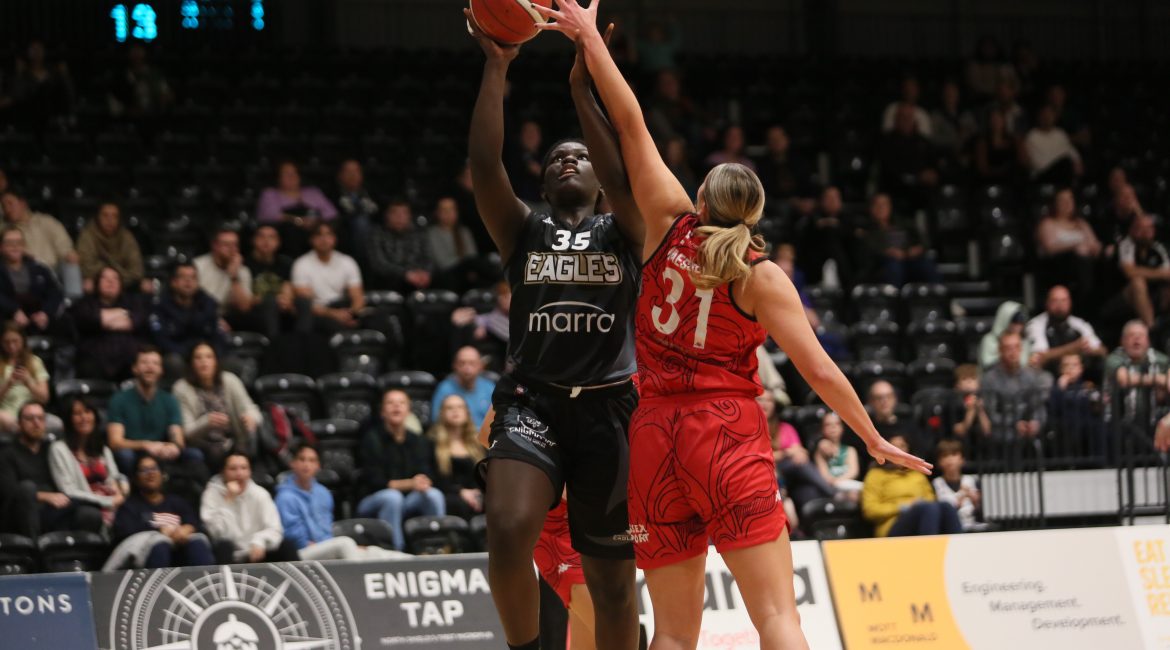 There were precious few fireworks going off last night at the Vertu Motors Arena as the Eagles of Newcastle took to the court against the Rebels of Essex.

Instead both defences dominated the game taking the power out of the offensive kegs.

What it meant was that we were treated to a hard-nosed war of attrition between two sides that had come into the game on a win each. After 40 minutes of tough, tight fought basketball it was Essex that would be able to enjoy the long ride home as victors.

Over the course of all four quarters they perhaps just about shaded the game although there’s no doubting that Head Coach Noelia Cacheiro’s girls certainly had enough chances particularly in the second half to have ground out a win.

If the journey up to Newcastle had been a long one it didn’t show in the start to the game. Eagles Antoinette Lewis netted two free throws to get the scoreboard moving but they were the last points the home side scored until deep in to the first ten minutes.

Eagles WBBL at Essex Rebels No Longer Going Ahead As Planned
October 9, 2022

Rebels weren’t prolific themselves but did manage 15 unanswered to establish a lead that looked larger than it sounded due to the lack of scoring. When Eagles finally did get their first basket from opening play there was only a minute and a half left to play in the opening period.

However, the basket did get the home side moving and a 9 – 4 run meant they had cut the gap to single digits going into the second. Newcastle then halved that deficit during the second but successive three-pointers by Ashley Munns and the dangerous Claire Paxton re-established the Essex lead.

The third was without doubt the Eagles’ ten minutes. Much better defence and finally finding some offensive power from Chloe Gaynor, Lewis and Katie Nolan saw them come storming back and cut the gap to 56 – 54 setting up a huge final stanza.

With 6:24 to go in the game Rachel Brand’s lay-up meant the Eagles had actually gone in front at 61 – 58 but that was as good as it got for the home side. Once again both side’s offences dried up although Rebels just cracked Newcastle’s open a bit wider.

They saw out the game with an 11 – 4 run that was enough to see them home with a vital win and leaving the Eagles looking deflated. Perhaps Paxton’s late bucket being the one that finally clipped the Eagles wings.

There’s no doubting that with Nolan, Gaynor and Lewis they have power inside. Indeed, Lewis’s third WBBL game saw her rack up her third double-double. But Newcastle need more particularly at the guard position to get the ball moving and find those players on a more regular basis.

For Essex the impressive Sune Swart battled hard inside all night and had 12 rebounds and 4 blocked shots to emphasise her performance whist ex-Durham star Paxton hit some big shots at big times when they were needed and that was what in the end got Essex on the right side of a very hotly contested WBBL game.