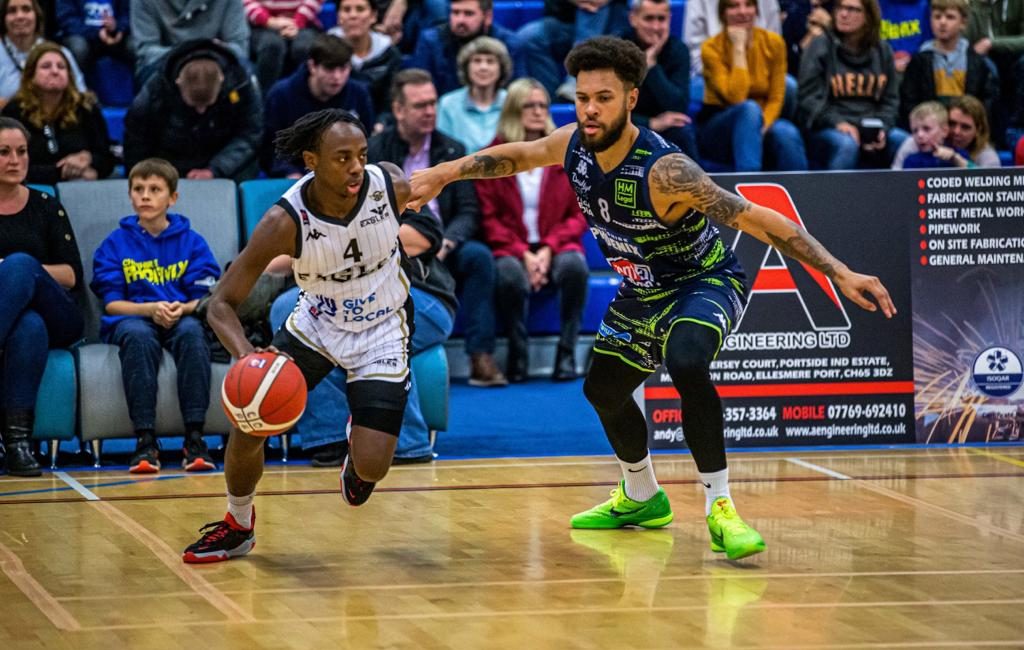 Newcastle Eagles travelled to Cheshire Phoenix yesterday already eliminated from The BBL Cup and destined to finish bottom of the North Group.

Since the season opened it’s been a catalogue of misfortune for Head Coach Ian MacLeod and his men and that theme unfortunately continued prior to the game at Cheshire. As news broke about Newcastle releasing Terrell Vinson from his contract, there came another setback.

This time it was heavy traffic on the journey down. It meant that the tip-off to the game had to be delayed and Newcastle had precious little time when reaching the venue to relax from the trip and warm-up time was also limited.

For Duke Shelton and Louis Sayers who were both back on the roster following their absence for COVID-19 protocol reasons it was not ideal although in the case of Shelton it certainly didn’t hamper his performance.

One good sign for the Eagles was that despite veteran standouts Rahmon Fletcher and Darius Defoe being unfit to play they had travelled with the team to support from the bench. Kyle Williams though on this occasion didn’t travel and stayed on Tyneside to rest up.

It was the returning Shelton who got the game scoreboard and the Eagles up and running with the first basket of the game. Incredibly the big centre would score the first 12 points for Newcastle until he was subbed out.

By then though MacLeod had called his first time-out of the game as a triple from Josh McSwiggan and two from the excellent Namon Wright had seen the Phoenix fly out to a 15 – 4 lead.

From the timeout Shelton scored seven in a row to bring the Eagles right back into the but Cheshire finished the first period the stronger and held a nine-point advantage at 23 – 14 going into the second quarter.

That period started well for Newcastle as they opened with a 7 – 2 run to cut the gap once again to only four. But Phoenix were not to be denied and Wright and power forward Radwan Bakkali combined for eleven points to stretch their lead into double figures.

Wright was on fire and seemingly able to hit from anywhere in that first half whereas the Eagles normally reliable long-range bombers Wesley Person Jr. and Captain Corey Johnson couldn’t find the bucket from deep as Newcastle only made one of thirteen attempts in the first half.

It meant that Phoenix surged onwards. The only concern for the home side being the inside work for Newcastle by Shelton but the Cheshire offence was certainly negating that as they took a 48 – 30 lead into the locker room.

Cheshire jumped out quickly as the second half began with Wright continuing to lead the way. MacLeod was forced to call an early time out as his charges slipped twenty-four points behind at one stage.

They did rally and Johnson and Person Jr. found their range and the basket on a regular basis. Unfortunately for Newcastle so did the home side and the third ten-minute stretch became a scoring race that the visitors lost 31 – 29 to go into the final period twenty points adrift.

To their credit the Eagles never let their heads drop and showed real determination in that last ten minutes. A late run actually saw them close the gap to twelve points at one stage to give them an outside chance of an unlikely comeback but a fifth foul on Shelton ended his game and that hope.

There will be better days ahead for this Newcastle roster. Johnson and Person Jr. have started to score the points they were recruited for and Shelton added 12 rebounds to his 27 points for an excellent double double.

The likes of Themba Yabantu, Sauver Kande and Daniel Johnson-Thompson have played significant minutes during this difficult stretch which will stand them and the roster in good stead going forward.

When Fletcher, Defoe and Williams return to fitness and if the right replacement is recruited for the released Vinson this is an Eagles side that will stand the test of the BBL and will challenge for honours.