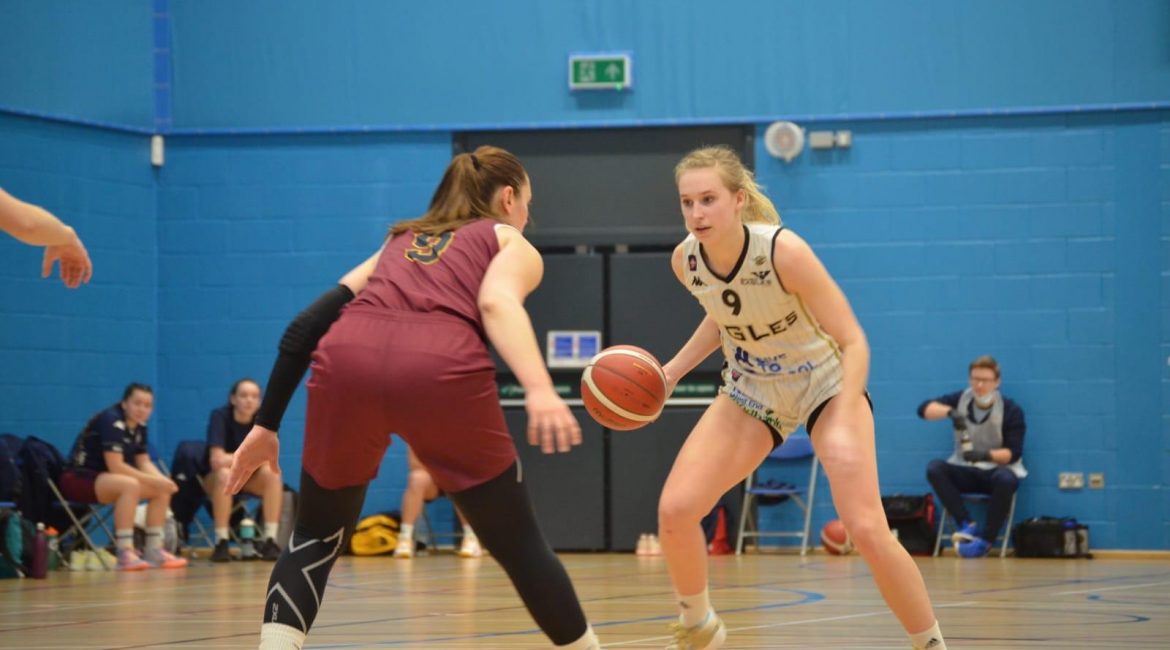 The visitors snapped a five-game losing streak to stun the hosts and move back into the Championship’s top eight.

On a day when Newcastle had four players in double figures, a combination of strong character, total commitment and complete focus underlined a statement win for the sensational visitors.

And no wonder head coach Chris Bunten was beaming with pride as his battling underdogs headed home from the Cardiff School of Sport with a big victory under their belts.

When the two teams met on Valentine’s Day it was Cardiff who capitalised on a fast-tiring Eagles roster to clinch a two-point victory at the death.

And Newcastle were desperate to turn the tables and halt a confidence-sapping run of 10 defeats in their last 11 games.

The absence of co-captain Rachael Bland and guard Ruth Thornley meant Bunten was forced to run an energy sapping eight-player rotation for most of the afternoon in the Welsh capital.

But Ori Chukwu-Etu’s transformation from bit-part bench player to key starting five star gathered pace as the pharmacy student gave the visitors an early shot in the arm.

The Eagles Academy product has profited from being part of a short-handed roster this season and her first half haul of eight points, five rebounds, two assists and two steals in just 16 minutes underlined the forward’s vital contribution.

Chukwu-Etu was at the heart of a lightning start for Newcastle as the visitors tore into an 14-4 lead.

A Jorjah Smith triple with 45 seconds of the opening period remaining restored the Eagles’ double-digit advantage.

And Bunten’s side withstood some serious second period pressure to lead 39-29 at the half and lay the foundation for a stunning first win in six.

Two weeks earlier Gorrell had bagged 29 points and dished up nine assists against the Archers on her way to yet another MVP display.

And a fortnight down the line the in-form American appeared on course to repeat the trick with 12 points, five boards and two assists after an intense opening 20 minutes.

Cardiff, meanwhile, were struggling to rediscover the offensive intensity that had underpinned their win on Tyneside earlier this month.

Italian Mara Marchizotti had been held scoreless during the first half and the centre’s frustration boiled over as she picked up three early fouls.

It was a similar story for Shannon Hatch who never looked like replicating her double double of 13 points and 12 rebounds at the Eagles Community Arena.

Newcastle’s defence was back to its stifling best and when Marchizotti picked up a fourth foul midway through the third quarter it was advantage Bunten.

Five Gorrell free throws on the bounce opened up a 57-43 lead with two-and-a-half minutes of the third quarter to play.

And, given the opportunity, the league’s most fouled player was more than capable of leading her team to victory from the bonus stripe.

Fatigue must have been kicking in as the Eagles approached the half hour mark but back-to-back scores from Abby Lowe and Millie Oates saw the visitors lead 66-45 heading into the final period.

This time there was no late wobble to deny Newcastle a deserved win and Bunten was even able to hand a WBBL debut to Academy star Yemisi Mefful down the stretch.