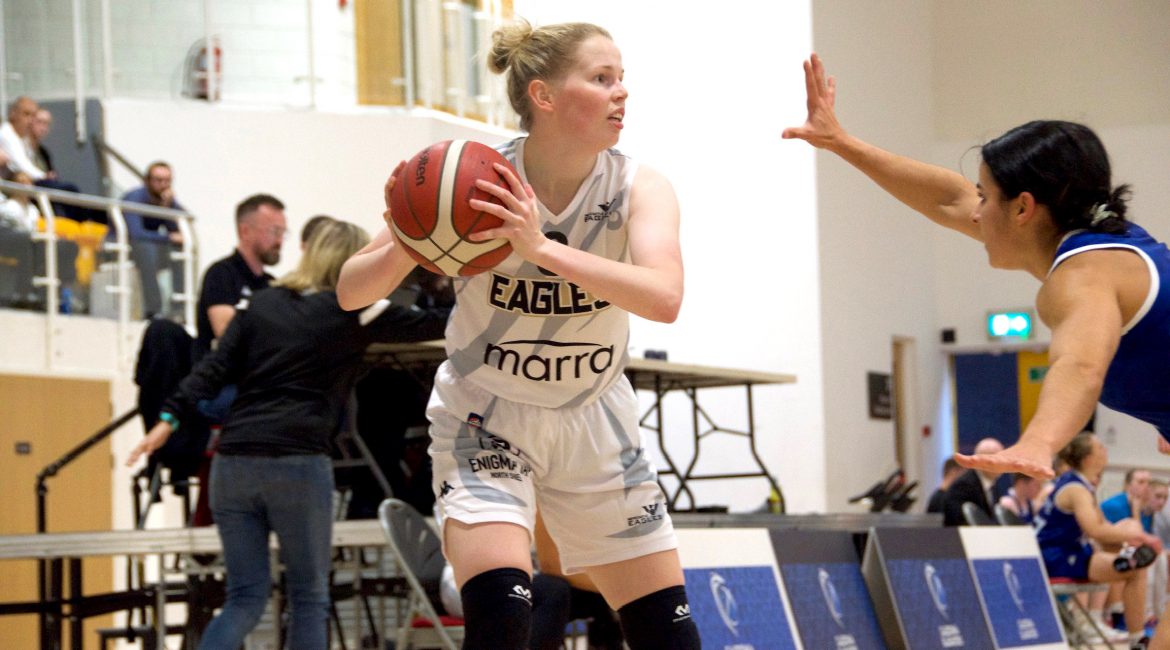 A double double on debut from Katie Nolan couldn’t save Newcastle Eagles from a sobering defeat at the hands of Caledonia Gladiators.

The ambitious Scottish franchise dominated from start to finish as the depleted visitors struggled to find any semblance of rhythm.

And although Nolan emerged with 15 points and 14 rebounds, the battling US forward will be bitterly disappointed that her brave contribution counted for nothing.

Newcastle’s error-strewn display handed the hosts the initiative from the tip and Miguel Angel Ortega Marco’s side scored 28 points from 31 Eagles turnovers.

But on a night of few positives for the Tynesiders, Chloe Gaynor played 38 minutes after recovering from a quad muscle injury.

And the returning centre finished the night with 15 points, eight rebounds and two steals after turning in a typically feisty performance.

Consett-born Chantelle Handy — an on-off target for Team Northumbria and Newcastle Eagles over the years — started for the Gladiators.

And the Scottish club’s new player-coach immediately set the tempo for a team in transition before exploding off back-to-back triples in the second period.

The hosts had led 22-9 after an utterly dominant opening 10 minutes and Handy’s brace of three-pointers after the restart killed a brief Eagles comeback.

Newcastle had looked the brighter of the two teams coming out of the quarter break with Nolan and Zoe Willis reducing the deficit to single figures.

But Great Britain star Handy’s accuracy from downtown strengthened the Gladiators’ grip and laid the foundation for a merciless 14-6 run to half-time.

Only Gaynor had looked capable of causing Caledonia’s defence concern during an all-action first quarter that saw the fit-again centre bag six points and seven boards.

But the Eagles’ star was well shackled during a frustrating second period and it required a late cameo from new recruit Alex Campbell to boost the Tynesiders’ spirits heading into the locker room.

And all four travelled north of the border alongside experienced WBBL playmaker Ruth Thornley.

But it was the Gladiators’ bench that came to the WBBL’s opening night party as Erin Jones and Marlee Ball hit eight points apiece before the break — the pair combining for 34 points overall.

Missing the sidelined Courtney Clasen, Newcastle simply couldn’t match their rivals’ strength in depth but a roster renowned for its fighting spirit refused to throw in the towel.

And a far stronger start to the second half at least offered a glimpse of the potential within a squad still short of two senior players.

Caledonia edged a competitive third quarter 11-10 as Newcastle finally doubled down on defence.

But the story of a frustrating fixture was the Eagles’ failure to find any consistency at the offensive end — the visitors struggling to shoot more than 30% from the field all night.

Only Nolan and Gaynor hit double figures and skipper Marina Fernandez had to wait until the 36th minute before landing Newcastle’s first three-pointer.

The Eagles are in action at the Vertu Motors Arena for the first time this season next Saturday 1 October and hoping for a big support to cheer them on.

Tickets for the WBBL team’s opening home fixture are available now on the box office.