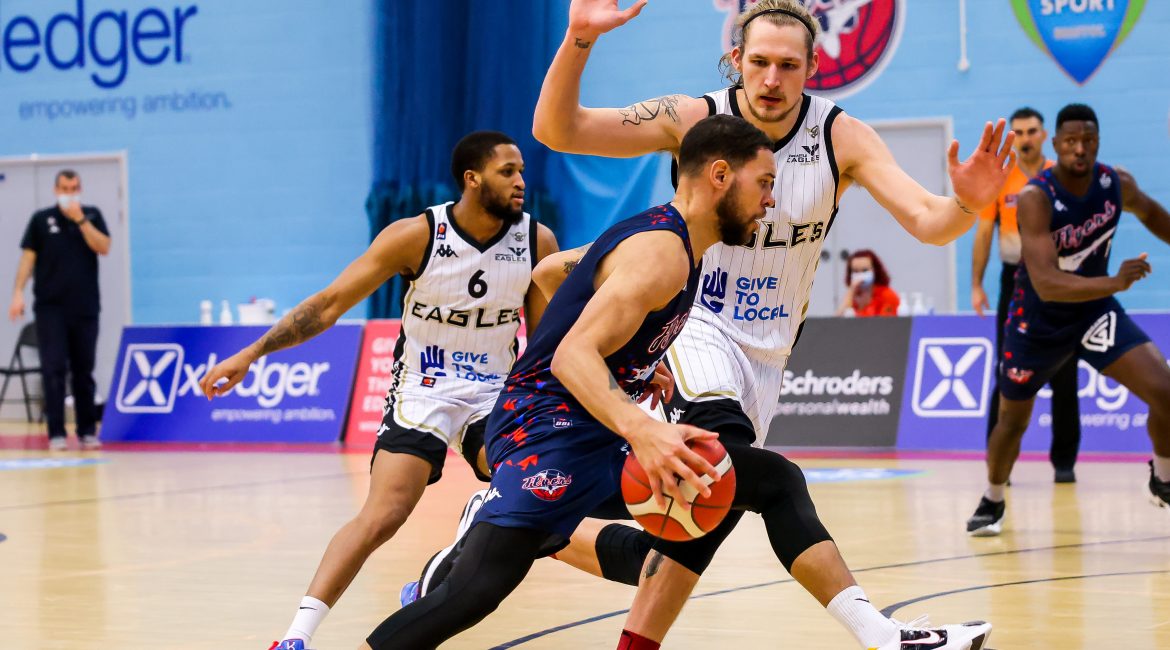 A marriage made in heaven, a team with a lust for winning, Valentine’s Day?

Perhaps it was inevitable Rahmon Fletcher and Cortez Edwards would combine to give Newcastle Eagles the kiss of life in Bristol.

The backcourt bromance was on song once again after disappointing in Friday’s 90-70 home defeat by Sheffield Sharks but it wasn’t easy for them.

How the Eagles needed their stardust against a feisty Flyers team that seemed intent on getting over their own Friday night heartache.

This was no Valentine’s Day massacre on the scoreboard but it was still a grizzly watch at times. Neither side was at their best offensively, with some ugly shooting on display.

Newcastle had already beaten their hosts on three occasions before yesterday’s match and led from start to finish but it wasn’t easy at any stage.

In Fletcher and Edwards, however, the Eagles do at least have two players who can take over when needed, particularly in the absence of BBL Cup final MVP Justin Gordon.

Fletcher had 10 points after just seven minutes but big man Marcus Delpeche kept Bristol – who lost 71-69 to Cheshire Phoenix on Friday – in touch, as both sides got off to sluggish starts.

The fact the first quarter – which featured a two-and-a-half-minute spell without a single point being scored – finished 14-9 to Newcastle tells its own story.

Edwards, who was particularly quiet at the start, sprang into life during the start of the second quarter, racking up Newcastle’s first seven points of the period. Yet still Ian Macleod’s men couldn’t shake off the hosts.

With Gordon out and Shore Adenekan getting into foul trouble, it was up to Darius Defoe to lead the big men and combat the problematic Delpeche.

Whenever the Eagles have needed a rebound for the majority of this century, they have been able to count on 17-season veteran Defoe. In the first half in particular, the 36-year-old illustrated why he is the most decorated player in British basketball history.

Defoe hoovered up the boards, caused problems for the Flyers defensively and even produced a couple of assists Fletcher would have been proud of. That he only ended the game with four points was a shame after a performance which rolled back the years at times.

Meanwhile, GB international Pflueger quietly started to exert more influence towards the end of the first half and the Eagles’ big men appeared to be getting a better handle on things.

The final word from the first half went to Fletcher, though, whose acrobatic lay-up at the buzzer was something one might expect to see from a Harlem Globetrotter and which gave the Eagles a 37-31 lead going into the break.

If the first 20 minutes belonged to the two-time BBL MVP, the second half was where Edwards started to exert more influence at both ends.

With the Eagles struggling to get anything going from three-point range, the former Worcester Wolves ace chipped in with six points and a couple of assists, keeping the Flyers at bay.

When Newcastle last visited Bristol two weeks ago, they had to rally from 19 points down, clinching a dramatic one-point victory at the death. This time, the Flyers were the ones in pursuit and while never as far back, they failed to capitalise on their opportunities.

With just seconds left in the third quarter, GB international Teddy Okereafor passed up an opportunity to shoot and allowed Pflueger to win the ball back.

With just two seconds left, an Edwards breakaway set up a pair of Drew Lasker free-throws and a further score of his own to give the visitors a 54-46 lead and some valuable breathing room.

The hosts looked more frenzied in their approach as time slipped away in the final 10 minutes and while Okereafor and Justin Baker took on more of the scoring burden, it wasn’t enough.

Veteran guard Lasker popped up with some key points for Newcastle, while Evan Maxwell scored seven of his 15 points in the final quarter.

Fittingly though, it was Fletcher who rounded out the Eagles’ scoring, firing in a three-pointer and converting two free-throws in the final minute to see out the hard-fought win.

There is little time to rest for Newcastle, though, and they will face an entirely different proposition at title rivals Leicester Riders on Wednesday.