The Prince Returns To His Castle 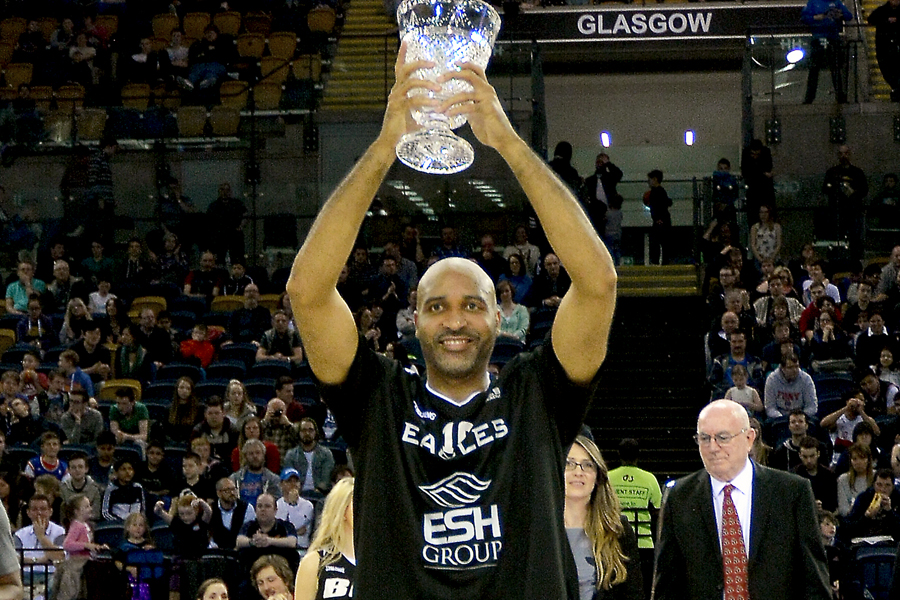 BBL MVP for 2014/15, Esh Group Eagles Newcastle Player’s Player of the Year and Supporters Player of the Year, four national trophies in his pocket and the MVP of The BBL Trophy Final. All awards “Prince” Charles Smith won last season as The Captain of the ship steered his Club to an unbelievable season.

So, did anyone ever doubt he’d be back? Somehow and some way, some did. Not a bit of it. Despite the fact that he’ll reach the landmark age of 40 during the coming campaign it’s more basketball landmarks that Smith is looking to make as he once again returns to The Eagles roster for another campaign.

There’s no doubting that “Charlie Buckets” is a shoe-in for Esh Group Eagles Newcastle’s Hall of Fame when he eventually unlaces his boots for the final time. If The BBL had a similar Hall of Fame he’d be destined for that as well.

But not just yet as Smith, who averaged 18.6 points per game during the regular season from an eye-catching 53% shooting and also corralled 6.5 boards, 2.9 assists and 1.6 steals per game is far from finished with playing yet and is looking forward to another season terrorising BBL defences.

“There was never a thought in my mind about retirement. Why would there be? I’ve just come off an amazing season both personally and even more importantly for the great Eagles organisation, I can still get it done, I still want to get it done and I’m still proud to play this game I love.”

“It seems like everyone keeps retiring me and the only one that never does and never says it is me. When I do say it that’s when it’ll be right and I’ll be ready but for now, I ain’t going anywhere other than up and down The BBL courts and looking for more success.”

“I’m thrilled and delighted to be back alongside my friend Fab and to be able to play in front of those great Eagles fans. I’m one of them and they’re important to me and as long as they want me and the body is willing I’ll just keep doing what I do.”

Eagles’ Chief Executive Paul Blake has been instrumental in keeping him at the club for the bulk of his career and is once again delighted to bring him back for another season.

“There really are few words left to say about the brilliance of Charles, because it’s all been said before – so many times. The fact that he manages to stand out in what is very much a team-orientated set-up does speak absolute volumes.”

“He gets better with age and just when you think he couldn’t possibly produce anything more special – he then pulls out something even more outstanding. Charles is an Eagles legend and I think that to have him back is what everyone at The Club wanted and I know I’m not alone in being thrilled to announce his re-signing with The Eagles.”

As well as the awards already mentioned Smith was Player of the Month for April, featured in seven BBL Team of the Week starting line-ups and was also named BBL Player of the Year by the Basketball Journalists Association (BJA).

Playing with a fractured hand, he turned the BBL Trophy Final on its head with some huge plays during crunch time and with injuries piling up for the Eagles at the end of the regular season, Smith was instrumental in getting his side over the line to complete the defence of their BBL title.

Little wonder that Tyneside is happy for their Prince to return to rule their roost once again.

Charles will get to sharpen his shooting skills very soon as the club look forward to pre-season games against stiff European competition in the form of Swedish champions Sodertalje and Port of Antwerp Giants from Belgium. Games take place on the 7th/8th/9th September at Northumbria University Sport Central and tickets can be purchased by calling the club on 0191 245 3880 or via Eagles website at www.newcastle-eagles.com.