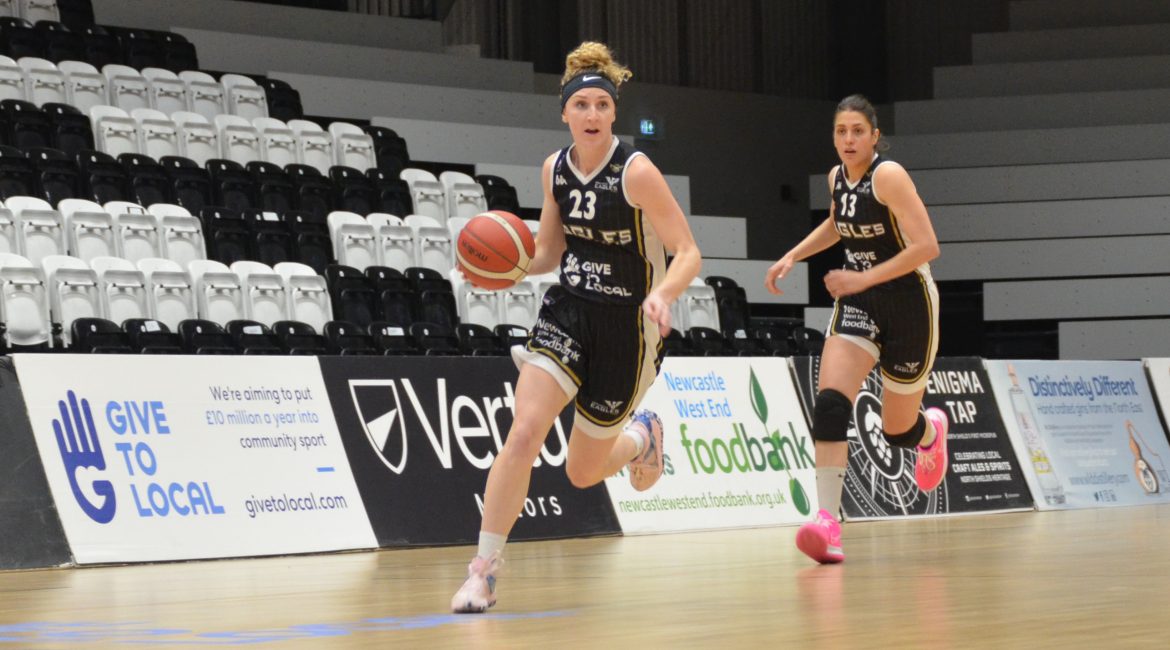 Ali Gorrell has promised Newcastle Eagles will bring the chaos to May Madness in a bid to cause one of the competition’s biggest upsets.

And Gorrell is planning an uncomfortable evening for the star-studded East Midlanders as the Eagles chase a famous underdog win.

“We’ll just have to throw everything we’ve got at Leicester,” said the league’s leading scorer.

“We need to play with maximum energy from tip to buzzer and create a little bit of chaos out there.

“Leicester are well drilled and well coached and they stick to a tried and tested structure.

“When we’ve been successful this season it’s when we’ve disrupted opponents’ structures and really dug in.

“We have to go into the game with the mindset that we’re going to make this night as annoying as possible for the Riders.

“We need to get after everything defensively, make sure our shots drop and just revel in our role as disruptors!”

Record-breaking Eagle Gorrell continues to set the standard in the women’s game this season and would be a popular pick as WBBL MVP.

But Newcastle likely need to win some silverware for that to happen and that means finding a way past the in-form Riders and mapping out a route to the playoff final.

Leicester crushed the Eagles the last time the two teams met on their way to a dominant 72-47 victory.

And Gorrell’s co-captain Rachael Bland admitted: “Riders finished second in the league for a reason.

“They’re a well-drilled team with a very good coach and we know we need to be better this weekend.”

Newcastle have turned their season around since February to earn an outside shot at playoff glory.

And although Chris Bunten’s roster faces a huge test of their mettle against hot favourites Leicester, the Eagles coach is relishing another crack at the Riders.

“This has been a season to forget for so many reasons but who knows…we might just be able to make it a weekend to remember!”

Gorrell and backcourt partner Maddy McVicar hold the key to a Newcastle win with the US duo in sparkling late-season form.

Riders will be well aware of the Eagles’ twin threat and both players can expect an intense examination of their big game mentality.

“One of the biggest strengths of our team right now is that we’re all excited for each other and we’re all determined to end this season on a high,” added Gorrell.

“All of the adversity that we’ve gone through this year has been tough and there’s no getting away from that.

“But the fulfilling part — for those of us who are still here this weekend — is that we’ve reached this point by fighting for each other every single day.

“We know this is a one-off game and we really do have everything to gain and nothing to lose.

“We’re a strong unit when we play to our potential and we’ll use everything that we’ve been through to drive our motivation against Leicester.”

And Bunten will need every body he can muster as the short-handed Eagles look to emerge from a David versus Goliath clash with a place in the Final Fours.

Saturday’s quarter-final tips off at 7.30pm and the action is live on the Sky Sports website and app with all the details of how to watch the whole of the May Madness BBL and WBBL Play-Offs available on our website.