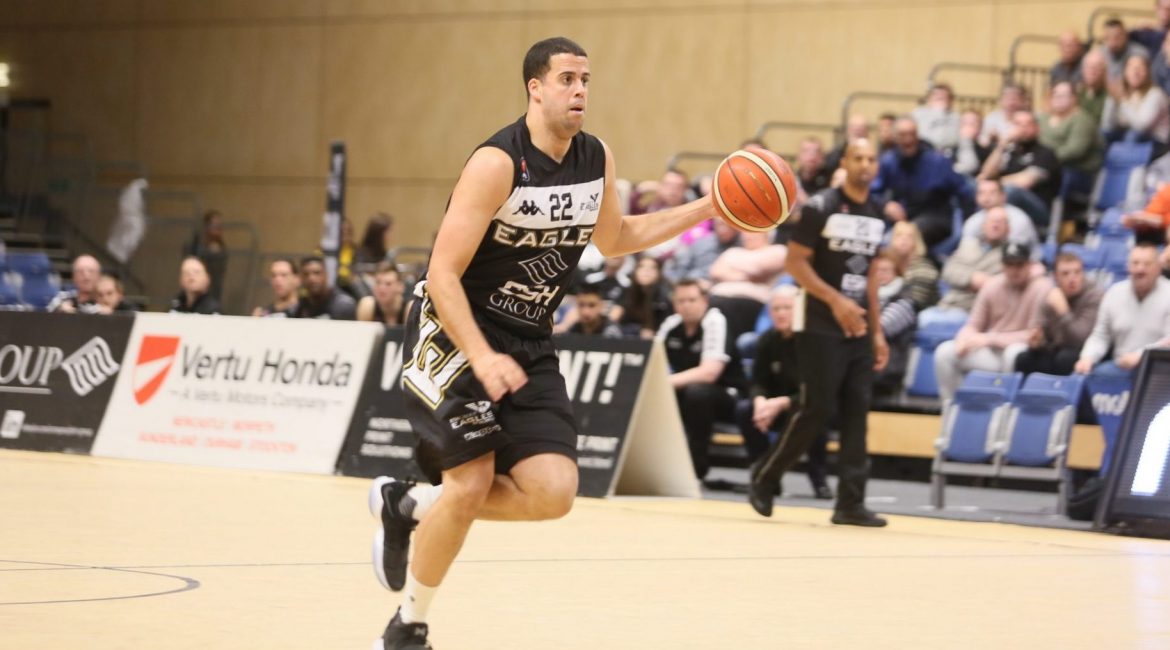 The Esh Group Eagles Newcastle return to their home court at Northumbria University Sport Central tonight for another big BBL Championship clash, writes Jeff King. It’s a top four clash as the visiting London Lions come to town looking to knock The Eagles off their perch.

The Lions sit in 4th place and it’s a game they really can’t afford to lose as they chase second-placed Newcastle in the Championship race. For Newcastle it’s a chance to return to winning ways in front of their loyal fans and keep their league challenge on track.

Last time out, The Eagles bounced back from their disappointing Trophy Quarter-Final loss against Sheffield to take a huge road win at Cup Winners Cheshire Phoenix. That win made it four league wins in a row and one of the catalyst’s in that game was Jamal Williams.

The forward notched 18 points including four triples from four attempts as his MVP effort was also his best performance in an Eagles vest so far and one that showed his worth to the team.

Williams is really looking forward to tonight’s game as it sees him go up against his former side and the last BBL side he played for before coming to Newcastle. He knows the importance of the game.

“It’s going to be a tough one as every game in The BBL is. I don’t see this game as any more or less important than any other game this season. We’re just going to take it as it is, it’s another game and you just have to be ready for it no matter who the opponent is.”

“There’s only two guys at London, Joe Ikhinmwin and Andre Lockhart, left from when I was there. I know Vince (Macaulay) is back coaching and has changed things around but for Kai and me it’s just another game rather than a one against an old Club.”

Sentiments that perhaps Ikhinmwin and Lockhart could echo as they are both former Eagles returning to play against their former Head Coach on a court they know well. For Williams though he’s looking to build on that performance against Cheshire.

One of the reasons he played as many minutes as he did was they way he responded to the call when Terry Martin went out of the game early with an injury. With Martin doubtful for tonight’s game it may give Williams another chance.

“It was unfortunate that Terry went down with an injury but it’s a bonus for us that we have depth and we have guys that can come in. Depending on the game some guys may be playing more than others.”

“It all depends on what’s working for us at the time and when you play for Newcastle Eagles you have to be ready as you never know when your number’s going to be called. My number was called at Cheshire and I’d like to think that I did what Fab and the team needed in response.”

“If Terry doesn’t make it tonight I’ll be ready for sure to step up again if my numbers called. I’ll be ready to go and help my team again in any way I can.”

With the BBL Cup and Trophy no longer possibilities it is all about The League and The Play-Offs for Newcastle now. The Eagles have not played since that great win at Cheshire almost two weeks ago, but Williams is sure they’ll be ready for tonight.

“We’re 4 – 0 in the league in 2018 and we’re just looking to take it one game at a time. Hopefully we get the win tonight and then only then we’ll start thinking about Manchester on Sunday.”

“The first week after Cheshire we still trained but there wasn’t much strategy or going up and down, five on five it was more about individual development and getting lots of shots up, doing skills work, keeping fit and getting in to the weights room.”

“But now we’re all back, we’ve had a good few days in practice, looked at some film and focused in on the Lions and being ready for the game tonight.”