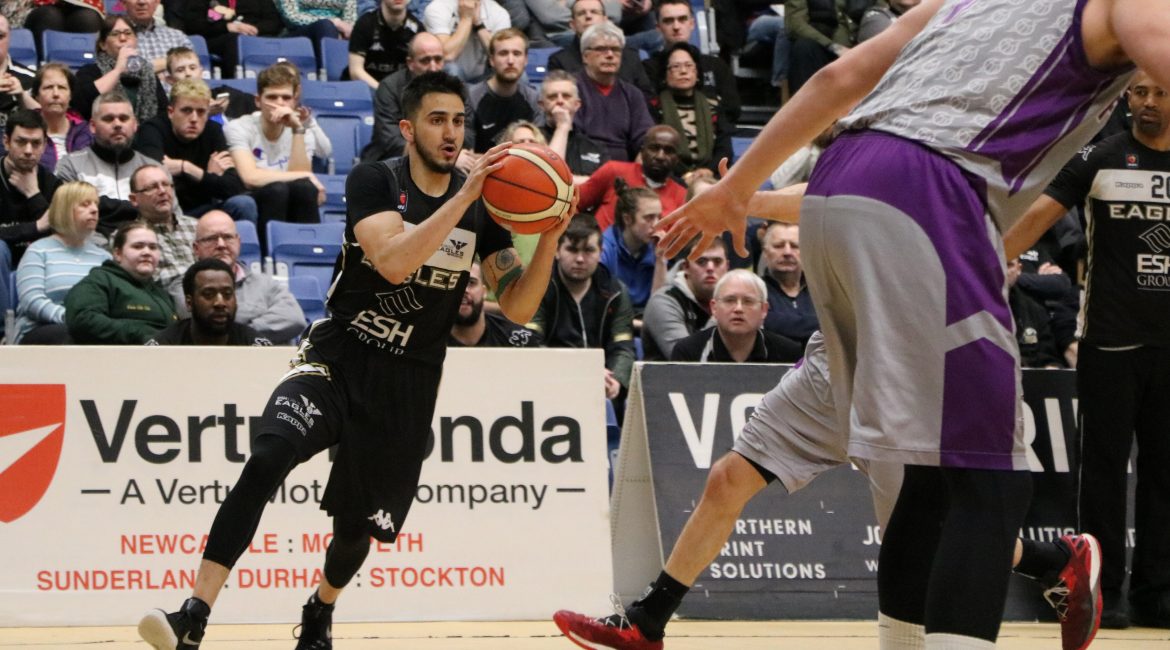 On the face of it, tonight’s BBL Championship match-up for Esh Group Eagles Newcastle against bottom of the table Leeds Force has a look of inevitability about it, writes Jeff King.

The Eagles have already thumped Force twice this season and the Yorkshire-based outfit’s 1 – 23 record leans towards a Newcastle clean sweep of the league fixtures.

However, look a bit deeper and it’s perhaps not as straightforward as it seems. The home side go in to the game at Northumbria University Sport Central still without Captain Darius Defoe and now without his replacement as Captain, Drew Lasker.

Lasker as has been well documented has flown out to Australia’s Gold Coast to be part of the England Commonwealth Games Basketball squad who are looking to bring home a medal from that competition.

Add in the fact that Player-Coach Fab Flournoy is sweating on a late fitness test following the ankle injury he picked up in last weekend’s fantastic come from behind win over Bristol Flyers and suddenly the game is not as certain as it may have seemed.

A fact that back-up guard A J Basi referred to when he previewed tonight’s clash, a game where he is aware of the depletion within the Eagles ranks.

“We had a quality team win last week. It’s nice to get a little streak going, playing good at home, playing good as a team, moving the ball and finishing well. I think we’re looking to do the same tonight and this weekend.”

“Play with 40 minutes of energy on the defensive end and sharing the ball on the offensive end.”

“It’ll be strange going in to this game and the one’s to follow without Darius and Drew. Every time you’re down a few bodies it makes things tougher. Not just on court but in practice preparing for the game.”

“Those two guys are a huge focal point for us and they’re leaders for us and having a new team in terms of BBL experience means it’s a challenge to be without them. Everyone including myself are excited and glad for the opportunity.”

Opportunity is a great word and one that certainly sums up the possibility of Basi’s role tonight as the team and coaching staff will be looking to him to step up, a fact he acknowledges.

“Ever since we knew Drew had been selected for England he’s been on me a little bit extra in practice as well as the rest of the guys. He’s been telling us to get ready for this opportunity that’s going to be coming our way.”

“I’ve been looking forward to it, preparing for it and I’m ready to step-in and fill-in to help the team this late in the season.”

One player that hopefully is ready to step-up is youngster Themba Yabantu whom the Eagles have promoted from their under-23 side and who will be on the bench tonight. Basi has been impressed with Yabantu who has trained regularly with the seniors this season.

“It’s exciting and I’m happy for him. He’s definitely one of the better younger guys I’ve seen around the Newcastle programme. I think it’s cool and a testament to the Eagles Foundation having a local kid come up through the programme and getting promoted to the jersey with the big boys. I think he’s deserved it.”

So, Leeds tonight and that must be the focus but just around the corner is a tough trip to Surrey on Sunday and then back-to-back away games at Leicester and London next week.

“We’ll take every point as it comes and right now its about Leeds tonight. We need to get this win and then move on from there. We’re still expecting to be down a few bodies. But the story remains the same.”

“It’s about us. It’s about getting right and playing together and getting the train rolling as we head in to the play-offs.”