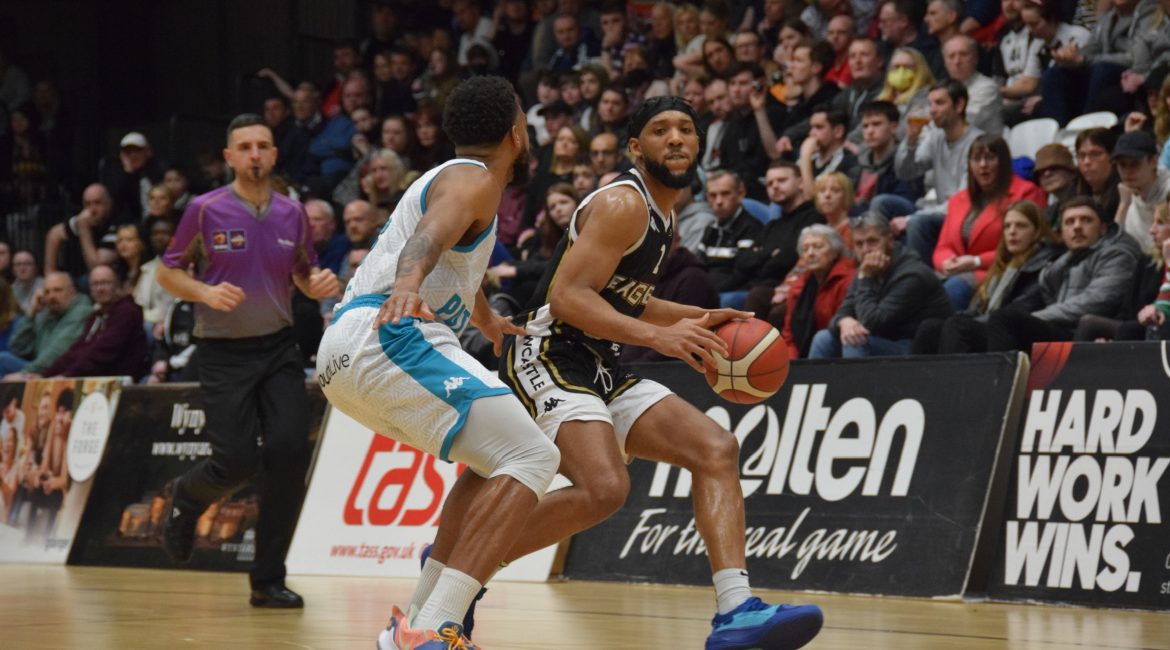 It’s been a tough time for Newcastle Eagles in the last few weeks.

Five consecutive defeats in the British Basketball League have seen them slip out of the play-off places.

It’s the first time in a considerable time that they’ve entered the end of season run-in in danger of not making the end of season play-offs. A thing almost unimaginable in the Eagles history. But, they still have a chance of getting in the right place to make the final round of games.

Those chances may well be boosted by the return to the roster of star shooting guard Wes Person Jr. who missed both games last week after taking ill. He has been back in training this week but is still far from certain what role he’ll be able to play tonight.

Eagles’ opponents tonight at the Vertu Motors Arena are Cheshire Phoenix who came to Newcastle in the last game of 2021 and went away with a 77 – 74 win. That reversed the defeat Newcastle had inflicted on them on their home court 113 – 110 in overtime.

Since then Phoenix have gone on to win The BBL Trophy and are currently sitting in 5th place in the BBL table. So, another tough game awaits The Eagles tonight and Person Jr. is aware of that as he talked about being out, returning to the roster and how he sees tonight’s match-up.

“I’ve managed to practise all week and feel pretty good although it’s still a bit hard to get my wind. But it’s got better every day and I think I should be fine and I’m looking to give the team a boost by returning and giving them as much as I can.”

There’s no doubt the Eagles missed Person Jr. last week who found it strange to be watching from the side lines.

“It was super-frustrating. It was the first games I’ve missed in ever since perhaps since I was a child. It was frustrating but these things happen sometimes and at least now I know how to deal with it but I’m glad to be back.”

“We’ve struggled with injuries and covid and it’s been an up and down season for us. Everybody seems to have been missing at some stage and I feel like we’ve done as much as we could given everything that has happened and having so many disruptions.”

“Every day is a challenge but we’re ready to play whatever team we can put out there. It’ll be difficult but they main thing is we stay together and try to get this win. Things are pretty tight in the league at the moment but we’ve still got time to get a late run together and get a good play-off position.”

Confident and determined words from Person Jr. who sizes up the task in the way many would.

“We’ve just got to take it one game at a time and not think to far ahead. Cheshire tonight is our main focus right nowand we’re not looking beyond that. We just have to come out and take care of business first tonight, then we’ll see.”

“Defence is what Coach has been putting into our heads all week and that has to be our focus. They’re going to play a little bit different to what we’ve been accustomed to seeing. They’ve got three big guys on the floor at any given time.”

“We’ve got to match their intensity particularly on the offensive glass. They’re not as dangerous from the 3-point line as some of the teams in this league. They’ve got some guys that can get hot to compliment their rebounding so we’ve got to defend them and match their energy.”

“When we play to the game plan and execute like we should we look as good as anyone. We’ve just not done that often enough this season and haven’t put four quarters together often enough. I feel if we can do that and stop them then we’ve got a great chance to win and start moving forward again.”

Tip-off at The Vertu Motors Arena is as usual at 7:30pm for a game Newcastle really could do with winning.

Tickets are still available from the box office.