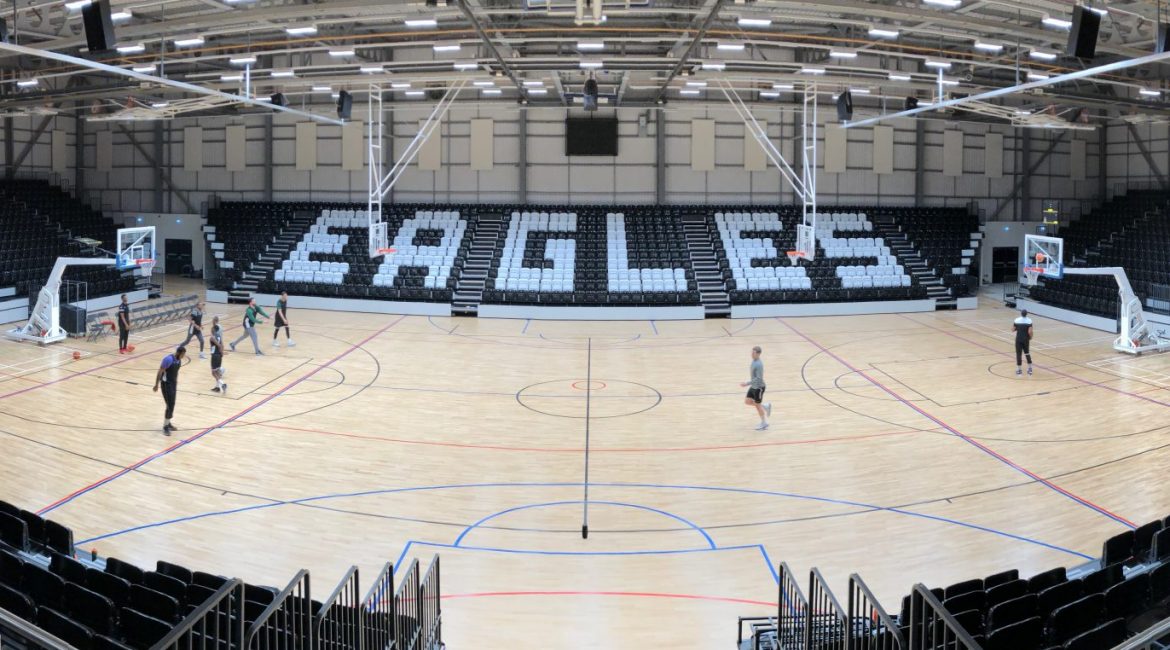 Tonight, sees the cumulation of a dream and a chance for Newcastle to add another iconic professional sporting venue to its pages of history as Esh Group Eagles Newcastle open its own doors to their brand-new arena.

The plaudits and praise have rightly reigned in on Paul Blake, Eagles Managing Director and his wife Sam, Chief Executive Officer of the Eagles Community Foundation who have nurtured this dream for over a decade and will finally see it become a reality.

But there’s another man that’s been on the journey every step of the way and is a huge part of the Eagles success story and has played his own massive part in realising this momentous occasion, Eagles Head Coach Fab Flournoy who’s clearly excited about tonight.

“It’s been a tough week but an exciting one as the players and coaching staff have seen first hand over the last couple of weeks the finishing touches being put together. Tough because we haven’t been able to practise as we should have but in the bigger picture, we understand that.”

“We got solid practices in before the Leicester and Plymouth away games and that helped us get the rewards. But we’ve not had that luxury this week although to be honest this is one time when the occasion is bigger than the game.”

“We haven’t been able to practice on the new court much this week with all the work going, it’s been too dusty and bitty making it too dangerous and I’ve had to stop the practices in case anyone got hurt, but we’ll get through that and the end result will be worth it.”

It does seem a small price to pay and Flournoy is well aware of that but felt he needed to explain that before turning his thoughts to opening night and acknowledging how huge it is for the sport of basketball and Newcastle as well.

“It’s all great though about the new arena and I’m all for it. I’m excited about it and I’m ready to go but you also have to take it in your stride. As a coach I’m all right and it’s not a big deal in all honesty but as a person it’s a huge deal.”

“Trying to decompartmentalise it and put it in to boxes and understand what it is and what we need to do and quite simply it’s a game-changer. It’s going to change the livelihoods of people in the North East, it’ll provide jobs and resources for people. Create a place for kids to play, impact grassroots at an unimaginable level.”

“Us not having our own home was always a sticking point for us but now that we have our own home which we can play out of and just as importantly develop out of and bring everyone to us showcasing another iconic sporting building in the city.”

“You can’t help getting court up in the nostalgia of it and the understanding that this is a monumental occasion. It’s bigger than the basketball game. The game is important but even to me the event is bigger than the game. It’s a sell-out crowd, there’s not a seat to be had anywhere and that’s phenomenal.”

“We’ve had huge crowds for our games at both the Metro Radio Arena and Sport Central but never a game where we’ve had to literally turn people away because we’ve got no seats left anywhere. That’s never ever happened to us ever in my time at Newcastle.”

It’s unusual for a 100% committed basketball man like Flournoy to virtually put the game second to the occasion but he was adamant that whilst he knows the game is important, it is an irrelevance to what is about to occur.

“I don’t mean any disrespect to Plymouth or the game but it absolutely that one-off time when the occasion is bigger. It’s one of those moments that will be etched forever in the history and the future of The Club. You have to take it for what it is and accept that whatever is going to happen is going to happen.”

“We just played Plymouth on their own court and won and they were the hottest team in the country and Coach Paul James is coaching phenomenally well. Donte Nicholas is the BBL Player of the Month, they’ve got Rashad Hassan who leads the league in scoring, Joonas Jarvelainen, Wilcher and Payne too.”

“Their bench guys are playing really well at the moment also so they’re a tough team. To have that team have the time to prepare to come up here and play. Equally they know it’s the opening of the Arena and if I was them, I’d be coming up here trying to ruin the occasion.”

“So, I can’t necessarily say it’s going to be nostalgia and we’re just going to turn up and win. You can’t say that or predict that’s going to happen. All I can say that on this occasion is that it’s a huge moment. Each day it’s been a dramatic change and I keep saying “wow” which is why the game is secondary.”

“This journey started over a decade ago with Sam and Paul and we’ve all had the opportunity to be along for the ride and now the opportunity is here. It’s just so unbelievable and such an amazing time but equally there is a game to be played.”