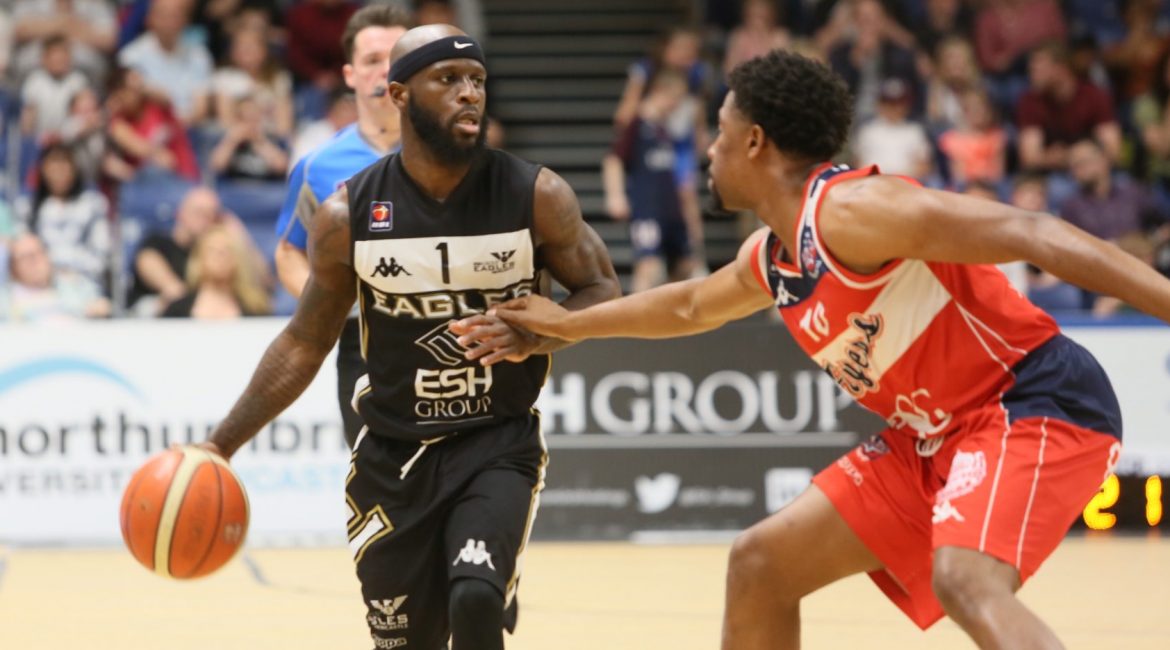 At half-time in The BBL Play-Off Quarter Final, Esh Group Eagles Newcastle have an 11-point lead to defend in the second half against the Bristol Flyers, writes Jeff King.

The difference is, this being play-off basketball that second half will be four quarters and forty minutes long and on the road this afternoon at the WISE Arena, Bristol.

On Friday night the Eagles took a solid 97 – 86 win over the Flyers. It was the seventeenth time in seventeen games that Newcastle have defeated Bristol since the South-West side came in to the BBL four seasons ago.

So, the question is can Flyers turnaround that deficit today in the second game and take their first ever victory over Fab Flournoy’s men or have the Eagles done enough and got enough to advance to next weekend’s semi-final games.

Newcastle’s court general, point guard Saah Nimley, who played his part netting 19-points and dishing out an impressive 12 dimes to his team-mates certainly thinks so.

The key to when this Eagles vintage looks at its most mature and well-seasoned best is when they are together, on the same page and making the extra pass. On Friday night that was evident with an excellent 31-assists distributed amongst the team.

“I think we shared the ball really well tonight. Everybody was finding the other guy and getting the ball moving and that results in some easy looks for us and results in us having a lot of opportunities to score a lot of points which we did tonight. We need more of the same on Sunday.”

“I think we just need to play smarter as individuals, know the situation, know how many fouls  you got. Sometimes you’ve just got to play straight-up defence instead of gambling for some loose balls and picking up cheap fouls like that.”

Nimley was really in the groove on Friday night and orchestrated a huge slice of what the Eagles did well in the first-leg win and he was pleased with his efforts.

“I’m happy with the way I’m playing and doing whatever I can to help the team win and that’s what I hope I get the chance to do on Sunday and continue doing it moving forward.”

“We’re always confident going in to every game. That will be no different on Sunday. We’re confident we can get the second part of the job done after the work we did in getting the right result tonight.”

If the Eagles do get “the job done” this afternoon they will fly in to the BBL Play-Off Semi-Finals next weekend. They won’t know their opponents until later in the day but whoever they play, the home leg of those semi-finals would be next Sunday at Sport Central with a 3:30pm tip-off.