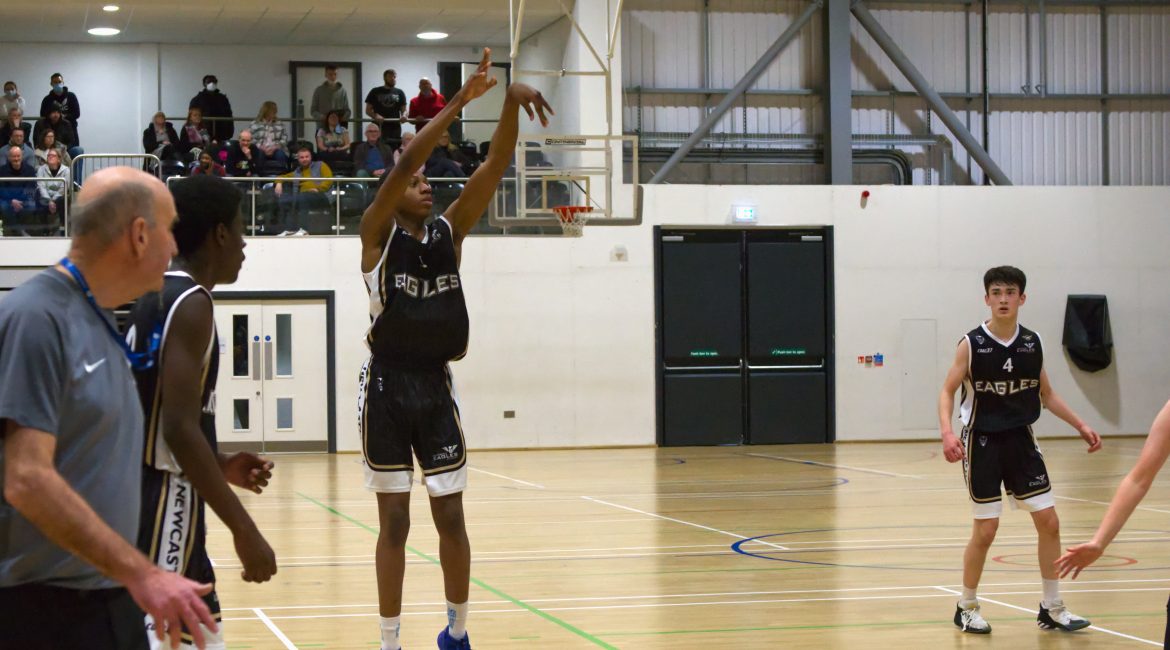 A point separated two fully committed sides as the Newcastle Eagles Academy opened their 2022 account against namesakes York with a nailbiting win on the road.

A thrilling Under 14s boys match-up showcased the best of junior basketball as both teams battled for glory from tip to buzzer.

But it was Newcastle’s no-nonsense defence down the stretch that held off a late York rally as the visitors closed out a 52-51 victory.

A tight first quarter hinted at the tense clash to come with Danny Ward setting the tone at the defensive end.

And Newcastle sneaked into a 12-9 first quarter lead following a competitive start to an ultimately fascinating fixture.

Aston Hall extended his side’s lead from the free throw line immediately after the restart.

And Bobowksi kept the scoreboard ticking over for the Tynesiders — adding a buzzer beating triple following Tom Beall’s trip to the bonus stripe.

But it was fast-improving York who took a 24-20 lead into the half.

Merrifield became the latest visiting player to step up to the free throw line as the third period burst into life.

Bobowksi, Joseph Osarenkhoe and Ben Lumley kept Newcastle in touch but constant York pressure allowed the hosts to open up a 35-32 lead with 10 minutes to play.

Turning back to their stifling defence, the visitors started to squeeze the life out of tiring York.

And Newcastle opened up a nine-point lead with eight minutes to play.

But York weren’t finished yet and a see-saw affair entered the final stages on a knife edge.

The hosts led by a point with 45 seconds on the clock but Merrifield sank a quick two and Newcastle stood firm to steal a famous win.

City Of Birmingham Rockets are next up for the Under 14 boys when they visit the Vertu Motors Arena on January 30.

Newcastle Eagles Under 16 boys delivered a defensive masterclass as City of Leeds Basketball felt the full force of an in-form roster.

The Yorkshiremen travelled to the Vertu Motors Arena looking to spring a New Year surprise.

But Calvin George’s side stuck to their guns and displayed impressive firepower to bag a brilliant 79-22 win.

The writing was on the wall for luckless Leeds from the tip and Newcastle stormed into a 13-2 first quarter lead.

Farrell Kepngang led the home side in scoring but was coach George’s ‘hand in the face’ defensive strategy that broke the game wide open.

Ten Eagles found the net during a destructive 30-point second period with the returning Akeem Johnson and outside shooter Jesse Osarenkhoe doing some serious damage on offence.

And it was game over as the two teams headed to the locker rooms.

Pedro Omere and Tobi Dawson ensured there would be no way back for Leeds as the hosts outscored their rivals 13-4 during the third quarter.

And Johnson plundered his biggest total of the season down the stretch — late scores from Zack Wilkinson and Marcus Gnezere guaranteeing every Eagle contributed points to a stunning victory.

Manchester Mystics proved their enduring quality and ruthless efficiency as they brushed aside Newcastle Eagles Under 14 girls.

A flurry of fast breaks caught the visitors cold as the hosts roared into a 38-9 first period lead.

And there was no way back for battling Newcastle with Katherine Bird scoring the only points of a frustrating second quarter.

Mystics relied on raw pace and a series of clinical second chance scores to put a one-sided game to bed.

But Newcastle came out after the half determined to make Manchester work for every second half score.

By the time the Eagles found their rhythm it was too little, too late against one of English basketball’s premier junior programmes.

But late triples from Seraphine O’Neill and Lexie Walton meant a difficult day ended on a positive note for beaten but unbowed Newcastle.

Newcastle Eagles were downed by derby rivals Teesside Mohawks in EBL Division Three as an inconsistent display was bookended by a slow start and a nervy finish.

The hosts conceded 29 first period points to trail by 12 after just 10 minutes.

And although Newcastle outscored Teesside 51-29 in the next 20 minutes the Lions saved their best until last with a late scoring salvo down the stretch.

The Eagles bid to bounce back from a 105-93 loss when they travel to Calderdale Explorers on Saturday (6.30pm tip).