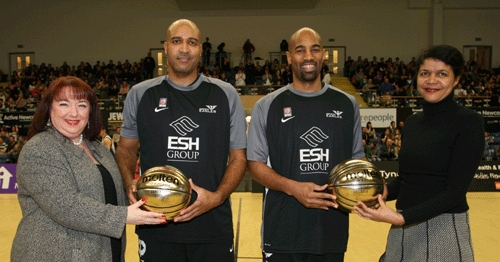 It was an extra special presentation for Charles Smith and Fab Flournoy last Friday as they received their Player and Coach of the Month Awards for January from Sharon Hodgson MP for Washington and West Sunderland and Chi Onwurah MP for Newcastle Central.

The right honourable MPs were at the game to support both Eagles and Wildcats as part of their roles on the All Parties Parliamentary Group for Basketball, a group that lobbies for basketball at the House of Commons on behalf of all parts of the support. The group was formed two years ago by Sharon Hodgson MP, now chair of the group and Eagles managing director and BBL Chairman Paul Blake.

Blake said, ‘ Both Sharon and Chi are keen supporters of the sport and have been working hard to promote a case for basketball with all of the government’s sporting bodies. Basketball’s participation rates are similar to Rugby Union and Cricket and few people seem to be aware of this. The APPG is helping to push that message as part of its central theme. Their support is invaluable and alongside other politicians in the group we are starting to make a difference. It is essential that we follow this path. It is something that the bigger sports in this country have been doing for decades’.