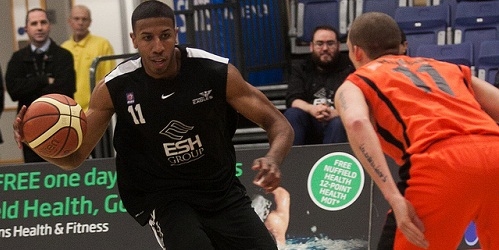 Four of our starting five this week will contest the forthcoming BBL Trophy semi-finals.

Stefan Gill (Manchester Giants)
The Giants’ guard takes his second berth in the BBL Team of the Week, courtesy of some blistering three-point shooting which torched Surrey Heat and resulted in Gill finishing with a stellar 28 points. He was a breathtaking six of seven from behind the three-point line, in one of the most efficient and impressive performances in the league this season from downtown. It was also a result which gave a real shot in the arm for the play-off hopes of his team.

Chez Marks (Cheshire Phoenix)
It has been a real roller-coaster season for Cheshire Phoenix, but Marks has been the one constant in the backcourt and the prolific guard added 23 more points to his tally for the season as they cruised past Worthing Thunder and into the BBL Trophy semi-finals. Marks made eight of ten from the floor and showed his value to his team-mates by dishing up seven assists and doing the dirty work defensively with a superb five steals. He certainly showed that he could be the man to catapult Cheshire to the Final at the Emirates Arena next month.

Alex Owumi (Worcester Wolves)
It was a super night for Worcester Wolves last Friday as they reached the last four of the BBL Trophy by beating holders Newcastle Eagles on their own floor to stun a packed Sport Central. Owumi tormented the big crowd with some sensational three-point shooting, which effectively sealed the win for his team. He made seven triples en-route to a mammoth 34 point haul, but it wasn’t only his perimeter game which impressed. In addition to three assists and three steals, he just missed out on a double-double by one rebound in what was the best performance of the entire weekend.

Andrew Sullivan (Jelson Homes DMU Leicester Riders)
The forward grabbed his third appearance of the season in our starting five after keeping Riders’ title charge rolling ominously along, as they continued to chase down another piece of silverware to add to their BBL Cup. They dismantled One Health Sharks Sheffield with consummate ease as Sullivan produced a stereotypical noteworthy inside-outside display. He claimed 21 points, including four baskets from long-range, and also completed an all-action line of eight rebounds, four assists, two blocks and a steal.

Jerome Gumbs (Cheshire Phoenix)
It’s a debut appearance for the forward who has had a positive impact since he returned to the BBL mid-season with Phoenix. His frontcourt production was the perfect accompaniment to the work of Marks in the backcourt as Phoenix battered Worthing to underline the gap in class. Gumbs was unstoppable in the paint, managing to accumulate a double-double of 25 points and 12 rebounds, as well as three assists, two steals and a block to send Cheshire into the semi-finals.