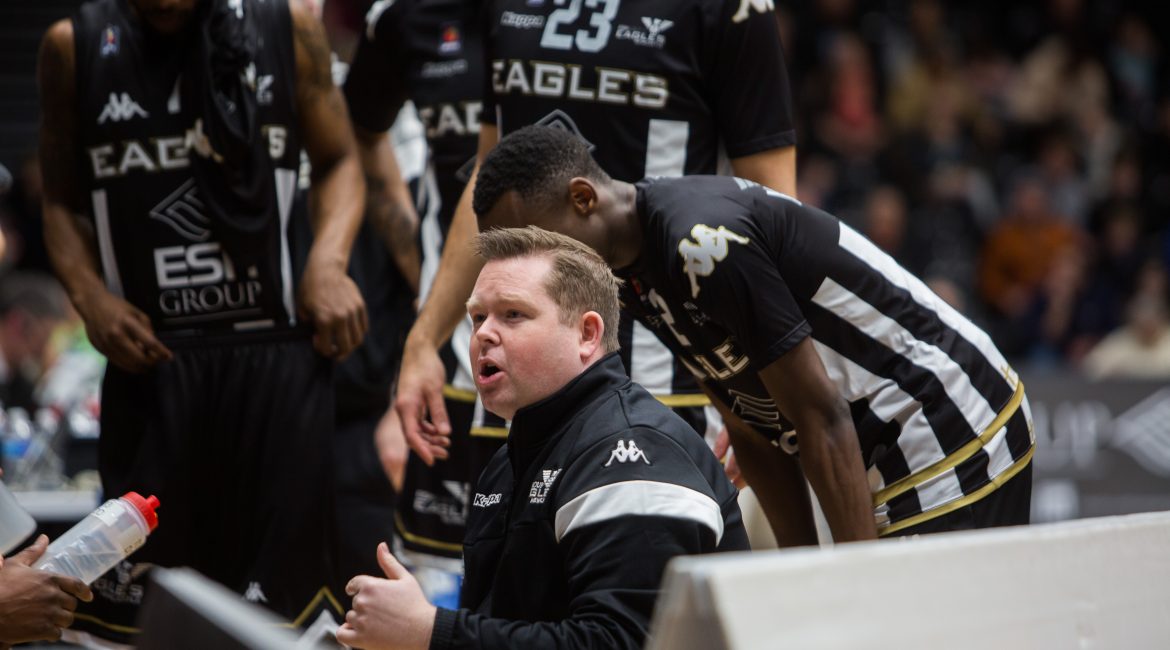 The regular BBL Championship season for 2018/19 came to an end for Esh Group Eagles Newcastle at The Eagles Community Arena on Friday night with a 99 – 80 loss against London Lions.

Assistant Coach Ian Macleod whilst congratulating Lions on their outstanding success has already turned his thoughts to the end of season play-offs which begin next weekend when the Eagles match-up against the Sheffield Sharks.

At the end of the game it was still not 100% clear who the Eagles would be facing as Macleod looked back on a tough end to the regular season with so many injuries blighting their later games but he’s positive looking forward to next weekend.

“We weren’t surprised to find it difficult tonight and last night as we’re very short-handed at the moment but it didn’t help to lose Drew Lasker during tonight’s game. Which upset our rotations even more but that’s fine you just have to deal with it.”

“But whatever, it’s done now and we did what could but now is the time to look forward.”

Although subsequent to the game Sheffield Sharks were confirmed as the Eagles first round play-off opponents, Macleod admitted that his focus was singularly on the Eagles and nothing else.

“I don’t like choosing opponents, we’ll get who we get but although it may seem like a cliché it’s really all about us and focusing on what we can do. Three or four weeks ago we were the most in-form team in the league. No-one other than us had a winning streak above two whilst we were at five and six.”

“Yes, we’ve had some injuries since then which have affected us but we just have to re-focus back to that point. I’ll flip it the other way. Team want to avoid a fully-fit Eagles and that’s they way we have to think about it. We just need to get back to that rhythm and if we do, I don’t really mind how we play.”

We now know that it’ll be Sheffield Sharks who swept the Eagles 3 – 0 in the regular season but two of those wins came in the last few weeks when Eagles were down three key players in Victor Moses, Darius Defoe and Jeremy Smith. Eagles are hopeful all we back for next week and the BBL will see a different side.

“Our injured guys are not far away at all. If these last two games had meant something to us or there was something on the line for us then you might have seen a far different bench and rotations tonight. But we had to look out for ourselves and do the best thing we can for our players and looking to next weekend.”

“Vic (Moses) came back tonight to test things out and he’s fine. The plan was never for him to play many minutes he just wanted to have a run out. It’s by no means a dire situation with long-term injuries, we all believe we’ll be ready to go.”

“We’ve got about a week to rest and prepare and that’s important. It’s about getting healthy and getting some rhythm back. There’re some guys who’ve played a lot of minutes recently that’ll be able to get back to playing their true roles. I think we’ll be fine and we’re not hitting any panic buttons yet.”

Although still to be confirmed it appear the Eagles will play the first leg of the Quarter-Final Play-Off at Sheffield next Saturday afternoon with a 4:00pm tip-off and the second leg will be at The ECA on Sunday tipping off at 5:00pm.

Tickets for the home second leg are on sale now: