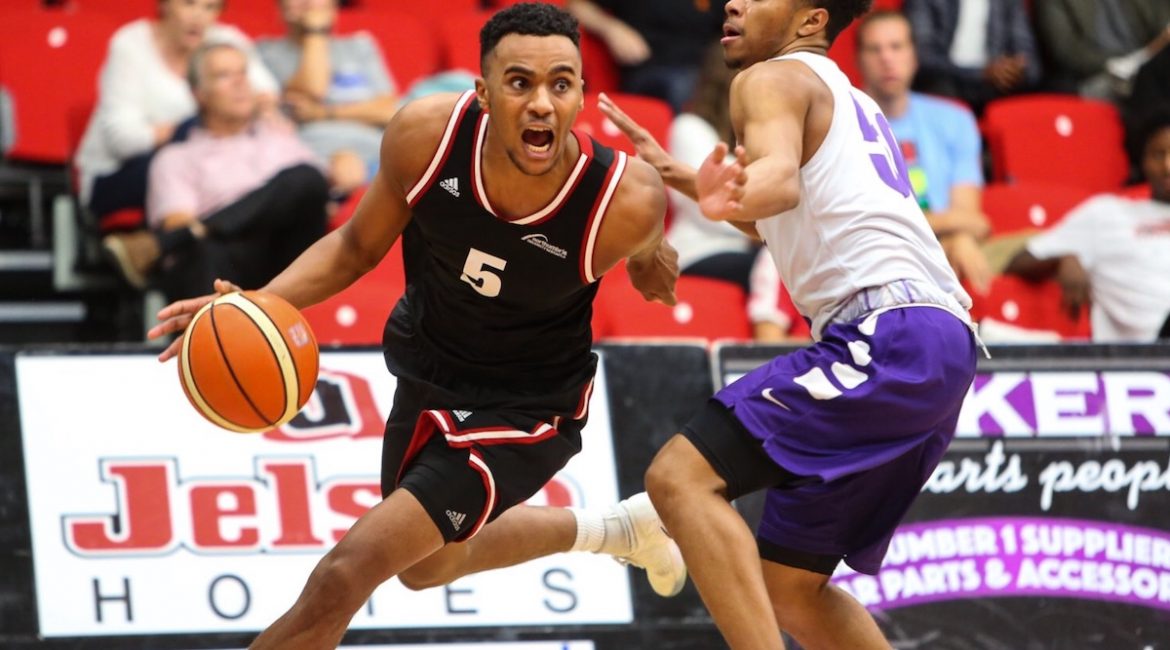 The “Newcastle Eagles Select” side went down to Leicester on Tuesday night to take on the University of Portland Pilots NCAA Division 1 side who play in the West Coast Conference and what a thriller of a game it was with The Pilots taking the victory 67 – 66 right on the final buzzer.

The “Eagles” were coached by Team Northumbria Head Coach Marc Steutel who used a combination of his own roster, the newly formed Newcastle Eagles Under-23 side, Derby Trailblazers and a certain Mr Darius Defoe from last year’s Eagles senior side.

It was a great opportunity to show case the fact that Team Northumbria are very much part of The Senior Eagles set-up and give an early run-out to several players that could well form the basis of Steutel’s roster for 2017/18.

With virtually all the newly announced senior Eagles yet to hit these shores, Steutel did well to put together a makeshift roster that gave Portland a close game where there was never much between the two teams throughout the 40 minutes.

In the opening quarter, the more organised Pilots flew out to an early lead but gradually “The Eagles” came back in to the game and nudged ahead 17 – 16 before ex-Derby Trailblazer, Rema Lascelles who is the brother of Newcastle United’s Club Captain Jamal hit a triple on the buzzer to make it 20 – 16.

“The Eagles” continued that form early in the second period and opened out an eight-point lead at 25 – 17 before excellent defence from the USA side saw them go on a 14 – 0 run to open a six-point gap before “Newcastle” closed the half with five unanswered points.

This sent the teams to the locker rooms with The Americans (who include ex-Charnwood College and Leicester Rider Josh McSwiggin in their ranks) holding a 31 – 30-point lead after a competitive half of basketball.

Inevitably there had been some rustiness in both team’s play and several “easy” looking baskets missed but as a pre-season game it was turning out to be a great workout for both sets of players.

That edge continued in the second twenty minutes as the sides went toe-to-toe without either being able to gain an advantage. Lewis Champion who led Team Northumbria so well last season, had only one point at the half but came alive in the third.

He hit three triples on his way to 11 points in the quarter and by the time the ten minutes of action came to an end the game was tied at 47 – 47 with all to play for in the final stanza.

And what a ten minutes it was with Defoe showing his veteran BBL class and Champion continuing in a rich vein for “Eagles”. For The Pilots, it was the Porter brothers, Malcolm and Franklin, who led the way whilst 7’ 1” German Centre Philipp Hartwich was a monster on defence coming up with 9 blocked shots.

The Porter brothers are actually the sons of Portland’s Head Coach, Terry Porter, a NBA legend of 17 playing years as well as spells as a Head Coach with Milwaukee Bucks and Phoenix Suns and they both look like a chip of the old block.

The game meanwhile went down to the wire, Champion who contributed 18 points on the night and Defoe with 14 led the way for “The Eagles” with Defoe’s final basket giving his side a 66 – 65 lead with only six seconds on the clock.

Perhaps “The Eagles” switched off expecting a time-out but The Pilots pushed the ball quickly and as Franklin Porter’s floater dropped through the basket the buzzer sounded giving The Pilots a dramatic late winner to end a highly competitive and worthwhile game of basketball.