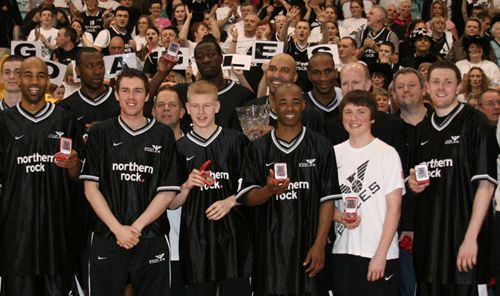 Newcastle Eagles coach Fabulous Flournoy was delighted after his team won the BBL Trophy with an 83-71 victory against Guildford Heat.

It was the ninth piece of silverware the Eagles have won in the past five seasons, and saw them gain revenge for last year’s final against the Heat.

“It’s a fantastic achievement to have won so many trophies” said Flournoy. “We’ve also been in contention for another three or four during that period, and it’s been a real achievement for the players past and present. We want to build on that, year on year, rather than being one of the clubs that fade away. Winning another trophy can only help us in the long run.

“I think nerves got to us in the first half, but in the third quarter we were able to assert ourselves and establish a lead. They got into the foul trouble, which obviously helped us, but in the fourth quarter we showed that we’ve learned to close out games even though they have another run at us.”

Flournoy had praise for the Heat, and one of the most enjoyable he had been involved with: “Heat played tremendously, and PJ [Paul James] did a fantastic job. The fact that they’ve been without EJ [Harrison] and that we won the last game probably made people think we’d win comfortably, but it was the complete opposite.

“It was a very tough basketball games, and probably the loudest final that we have played in. Both sets of fans made a lot of noise, and it looked like it was standing room only. It really felt like a final.”

Despite their success in the BBL over the past five years, Flournoy ruled out any entry into Europe in the foreseeable future, and still believes that the Eagles have a lot of work to do: “If we do going into Europe, we’re not going to win loads of game. But we need to be consistent and professional for our first two years and build on that. That’s what we’ve done in the BBL, we laid a foundation, and when that was there the trophies started to come. We’ll always aspire to play in Europe, but we’ll go for it when we’re ready on all aspects. We need to solidify and work on ensuring that players are coming through.”

Eagles return to action on Friday when they host BiG Cheshire Jets at the Newcastle Arena.