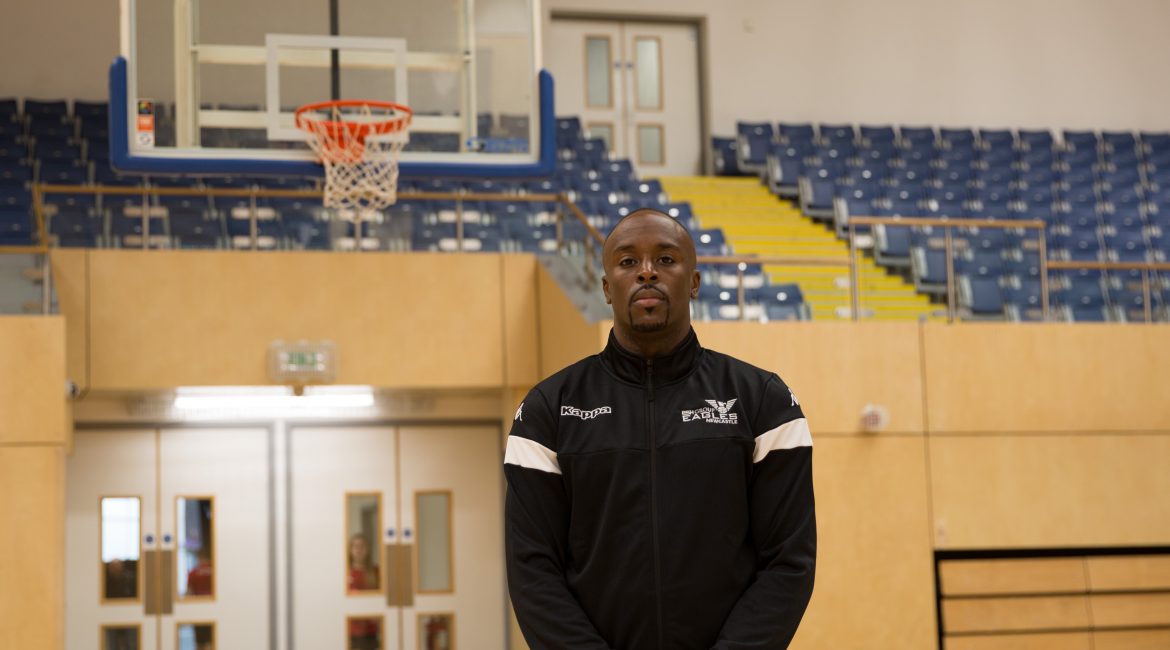 Esh Group Eagles Newcastle are off to a flying start in The BBL this season going undefeated thus far. On Friday at Sport Central they face their toughest test of the fledgling season as the reigning BBL Champions Leicester Riders are in town.

Mercurial Point Guard Rahmon Fletcher is also off to an electric start but is not as surprised as some at how well his team-mates and he have started.

“I think it’s just a process. I knew in Belgium which was a tough trip that we had real potential and we showed glimpses. Probably more defensively than offensively. Then we had the swap with Jeremy Smith coming in I really didn’t know how it would be.”

“But to be honest I’m not overly surprised with the group of guys and the core of guys we’ve got. It’s just all about implementing Jeremy, somebody that’s been a pro, in to our system. So, I’m not surprised but I’m more surprised with the margins by which we’ve been winning games rather than just winning.”

Fletcher himself is averaging an astonishing 13 assists per game and a lot of those have been to power forward Victor Moses and it’s that 1-2 punch that has had a lot of people sitting up and taking notice. Fletcher explained how that seems to be working.

“I think this year my focus has just been strictly about winning. I mean it’s always been about that but I think Europe changed my mindset. You don’t have to score to be effective and you don’t have to have the ball at all times.”

“With someone like Vic it’s different. Him and Darius (Defoe) are totally different and has given me a different option. Vic hangs around under the basket and those are my attack points and I can kind of just drop it off.”

“I have a good relationship on the court with Darius as well but with the way Vic runs the floor the connection just came a lot faster than anyone could have expected and I think that’s a good weapon for us.”

As always though as a disciple of Head Coach Fab Flournoy’s system he thinks defensive has been the main key to the Eagles fast start.

“That has been our staple diet for ever. In my last year we had that but we weren’t as locked in to as fast as this team has bought in to it. We only have three people in Vic, Jeremy and Kyle (Williams) that doesn’t know the system but they are learning quicker.”

“Our transition has been good but for me the way we’ve locked in defensively has definitely made it easier for us to do what we’re doing at the other end.”

Leicester are going in to November having only played one game in The BBL due to their involvement in European competition and will face Newcastle only 48 hours after having had a game in Hungary tonight.

“Its Eagles v Riders so a lot of stuff goes out of the window because of that.”

“It’s different for them. I can attest to how different it can be going from European to domestic games after my experience last year and it’s tough. The styles are so different although I do think The BBL has been more balanced so far. More emphasis on defence and a lot less run and gun.”

“I’m not so sure that for them it’s going to be as tough for them to make the transition as obviously it’s us they’re playing. They’re a really good team and they’ve been playing a ton of games and I think we’re all looking forward to it. Its Eagles v Riders so a lot of stuff goes out of the window because of that.”

Going forward the message from Fletcher to his team-mates is clear. They just have to keep on doing what they’ve been doing so far.

“That’s another one of our keys, especially this early when you’re playing a lot of teams for the first time. You have to just focus on yourself and do what you’ve been successful at and that’s what we intend doing.”

Friday night promises to be another fascinating chapter in the book of the Newcastle, Leicester rivalry and when tip-off rolls around at 7:30pm there will be a lot of interested eyes being cast on what will be a mouth-watering clash.