Eagles Top Of The League

Newcastle Eagles/News/Eagles Top Of The League 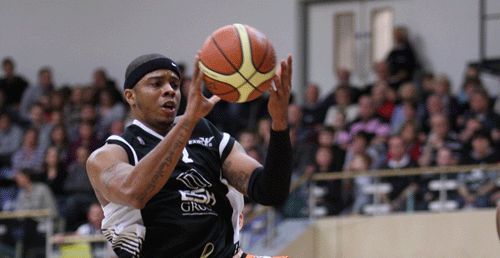 The Newcastle Eagles kept up their impressive run of form in the BBL Championship and moved level on points with the Mersey Tigers at the top of the table thanks to a 74-91 victory over the Essex Pirates at the Southend Leisure and Tennis Centre on Saturday evening.

The Eagles, who were still without their player/coach Fab Flournoy who is still recovering from pneumonia, started strongly as they opened up an early lead but they could not shake off a resilient Pirates outfit as the visitors ended the quarter leading 17-20.

In the second period the home side got themselves right back into the game and they bagged six of the first eight points of the quarter to lead 23-22, but that was the last time that the Pirates were in front as a 16-2 burst from the Eagles took the score out to 25-38. The visitors held onto the lead for the remainder of the half as they headed into the locker rooms ahead by 15 points at 33-48.

In the second half, the Pirates tried valiantly to get themselves right back into the game and a 9-0 burst midway through the third period closed the deficit to just seven points at 52-59. The Eagles remained conscious of the fact that the home side were getting themselves right back into the game and stepped up the intensity at both ends of the floor and kept the fightback at bay for the remainder of the quarter to lead by nine points at 57-66 heading into the final stanza.

In the final period, the Pirates kept pushing forward looking to close the gap still further and got to within six points at 62-68, but that was as close as they could get as the Eagles held their nerve from the foul-line to secure the victory.

Joe Chapman (pictured) was the star man for the victors as he netted 29 points for the Eagles, while Taner Adu led the Pirates in scoring with 15 points.

Eagles Assistant Coach David Forrester was pleased with the victory, but was impressed with the Pirates performance.

“This was a very tough game which was in doubt until the last two minutes of the game. I’m glad that the guys stayed strong enough down the stretch to get the win. I was impressed with the Essex Pirates and the way they played was nowhere near what their record suggests.”